Rousing adventure movies about the British Empire were immensely popular in the 1930s and 40s. Kim was a relatively late entry in this cycle, being released by MGM in 1950. The combination of Kipling and Hollywood must have seemed like a surefire success, as it had been for Gunga Din in 1939. But adapting Kim for the screen was not as simple as it might have sounded as first.

Kim, published in 1901, was KipIing’s masterpiece and it’s a tale of the Great Game, which was the game of espionage played out between Britain and Imperial Russia in the 19th century. This was the first Cold War. That sounds like a great basis for a movie but the novel Kim was a lot more than a spy story. To dismiss Kim as a spy story would be like dismissing War and Peace as a mere war story, or dismissing Crime and Punishment as just a murder mystery. Kipling was a complex and ambitious writer and Kim is a complex and ambitious novel. 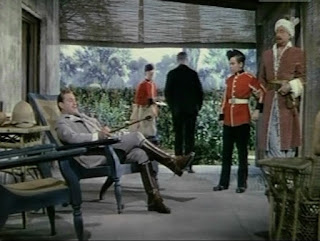 The setting is British India. Kim (played by Dean Stockwell) is a young Indian street urchin aged probably around twelve who is also, despite his tender years, a spy working unofficially for the British. Kim is intelligent and cunning and while he’s exasperating he’s also extremely likeable. Kim is actually white and he knows it but he also knows that white orphans get sent to school and that’s a hideous fate that he intends to avoid. Kim is white when it’s worth his while but mostly it’s more advantageous to be Indian. He is infinitely adaptable. These are qualities that allow him to survive on the streets with ease, and they make him an excellent spy. He works for Mahbub Ali (played by Errol Flynn), also known as the Red Beard, who is a British secret agent.

Kim’s friendship with Mahbub Ali is important but he soon develops an even more important friendship, with a holy man (played by Paul Lukas). He becomes the holy man’s disciple. He is a very useful disciple since he is an accomplished beggar, and that happens to be the most important quality required in a holy man’s disciple. Holy men are a dime a dozen in India but Kim comes to believe that his holy man is something special. And the holy man regards Kim as being rather special as well. It is a matter of destiny. It is the destiny of this holy man to search for a holy river and it is destiny that has brought him Kim as a disciple.

Kipling was an unabashed imperialist which automatically makes him anathema to many people today but Kipling was an exceptionally complex and nuanced imperialist. Kipling was a big fan of western civilisation but he was a big fan of eastern civilisation as well. Kim will discover his European heritage but that does not mean he will turn his back on his Indian heritage. And while Kim’s career as a British intelligence agent is important Kipling sees his part in the holy man’s quest as being equally important. Kim is caught between two civilisations but sees no reason why he can’t be part of both. Just as Kipling sees no reason why he should choose one or the other. Kipling’s views are deeply unfashionable but his respect for Indian culture was profound and sincere.

Getting all this into a movie was obviously just about impossible but it makes a very spirited attempt.

It’s helped by some fine acting. Errol Flynn gets top billing but Flynn knows that this time he’s a supporting player. Kim is the central figure and regardless of the billing Dean Stockwell is the star. Whether the movie succeeds or fails depends entirely on Stockwell. He is equal to the task. Kim is a character who is frighteningly precocious and he could easily become irritating but that doesn’t happen. Kim knows more about the world than any child his age should know but rather than making him insufferable it brings him the first glimmerings of wisdom. Stockwell’s performance is extraordinary. 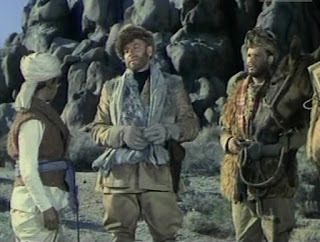 As for Flynn, he gives a rather low-key performance but it works because he’s supposed to be a spy and if spies want to reach old age they learn that there’s something to be said for blending in. And he makes us feel that when it’s necessary Mahbub Ali can be very businesslike and very deadly. This is not the dashing romantic hero Errol Flynn of the 30s but then that’s not not what this rôle requires. What is required is that we should believe he’s an experienced secret agent and he manages that.

Paul Lukas was a Hungarian actor and while he makes a very good holy man he comes across as a Hungarian holy man rather than an Indian one which is very disconcerting! 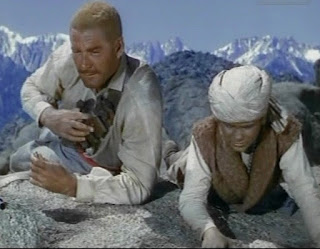 The problem with this movie is that even if you concentrate on the spy story elements this is a rather involved story and it’s going to end up being a fairly lengthy movie (in fact it runs for 113 minutes) and it’s not going to be a non-stop action movie. It’s just not a non-stop action story. There’s also the added difficulty that there’s no romance angle at all, and there’s no way such an angle could have been introduced.

Yet another difficulty this movie faces is that it assumes you have at least a vague knowledge of the period and of the Great Game, and that you’re familiar with the hysterical Russophobia of the period.

To appreciate this movie I really think you need to have read KipIing’s novel. If you have read the novel you’ll find that this is a more successful adaptation than you might have expected. Recommended, but with the caveats already alluded to.
Posted by dfordoom at 7:44 PM