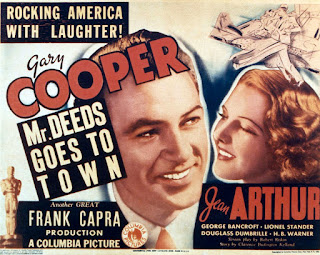 I have a very unhappy history wth Frank Capra. Frank and I just don’t get on. Well of course I’ve never meant Capra so I’m referring to his movies. It’s his movies I have a difficult relationship. Maybe it’s partly my fault and maybe it’s partly Frank’s fault. There are times when it has seemed that we’re going to reach an understanding. It Happened One Night wasn’t too painful to endure, in fact it was rather pleasant. After seeing that movie I had a feeling we were going to get on just fine. And then along came Arsenic and Old Lace  and things got very unpleasant. I thought Lost Horizon might be the breakthrough movie that finally put our cinematic relationship on terms of firm friendship. I came so close to liking Lost Horizon. It’s the kind of idea that I love. It has wonderful moments. But then just as we were getting along swell it all fell apart. But I’m not one to nurse grudges so here I am sitting down to watch one of Capra’s best-known movies, Mr Deeds Goes To Town.

When you mention Capra the first word that will spring into many people’s mind is corn. And Mr Deeds Goes To Town certainly has an extraordinarily cornball opening. One of the wealthiest men in America, Martin Semple, has died and he has left his vast fortune to a very obscure nephew. The nephew is so obscure that the lawyers handling the Semple have great difficulty find him him. He is finally located in the sleepy little town of Mandrake Falls in Vermont. And here’s the first sign that maybe this movie is going to be interesting. It’s almost impossible for Hollywood types to deal with small town America without sneering. This movie seems to be at the very least poking gentle fun at the rustic inhabitants of Mandrake Falls. But that’s not quite what’s happening. The simple folk of Mandrake Falls have an amazing kind of self-confidence in their rural lifestyle. You sense that they feel rather sorry for people who come from New York. It must be awful for them not living in a civilised place like Mandrake Falls but one should treat them with kindness.

Capra is taking sides, in a very gentle way, but he’s not taking the side that just about everybody else in Hollywood would take. 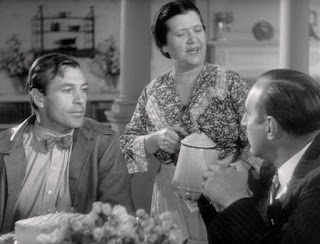 Mr Longfellow Deeds, now a very very rich man indeed, finds himself in the big city and all the people who had been bleeding his uncle dry assume they‘re going to be able to do the same thing with the nephew. The lawyers, who for some reason are incredibly anxious that no-one should take a close look at the books, naturally assume that they’re going to have no trouble at all with this yokel from the sticks. Now of course we know it’s not going to be that simple. We assume that Mr Deeds will prove to have enough down-home wisdom to get the better of them eventually. Again Capra surprises them. Mr Deeds is certainly a hayseed but he has more than homespun common sense. He’s actually in some ways as sharp as a tack. The head of the legal firm that has been managing the Semple estate is a crook and this is something that Mr Deeds has been aware of right from the start. Mr Deeds might be innocent in some ways but he isn’t stupid. He doesn’t see things the way most big city people see them but that’s because his perspective is different, it’s not that he’s dumb.

Mr Deeds naturally attracts the interests of the reptiles of the press and in particular he attracts the attention of Babe Bennett (Jean Arthur), a reporter with the ethics of a rattlesnake. She befriends Mr Deeds without telling him she’s a reporter and it’s easy for her to write articles making him look foolish. It’s the way she makes her loathsome living. But things get complicated. Babe has never actually met a man like Mr Deeds. It’s not just that he is decent and honest (although that’s rare enough in the circles Babe is used to moving in) he’s also wonderfully masculine in a very old-fashioned way. If a guy does the dirty on him Mr Deeds’ natural reaction is to slug him. On the other hand Mr Deeds displays a hopelessly outdated chivalry towards women. He really is a man from another world and another era but maybe he’s what the cynical Babe Bennett has been looking for. 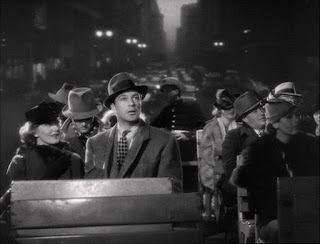 Mr Deeds soon figures out that he doesn’t need twenty million dollars and it’s also clear to him that having that amount of money isn’t going to make him any happier than he was back in Mandrake Falls. The obvious solution is to give away most of the money but to do it in a way that will do some good. He comes up with a scheme for taking unemployed men and setting them up on family farms. This is too much for his crooked lawyers who try to have him declared insane.

Mr Deeds Goes To Town is a movie that is obviously going to be interpreted in a political manner and there’s really no way of avoiding that. What’s interesting though is that the political stance of this movie is not at all obvious and it’s not at all what one would expect in a 1930s Hollywood movie and it’s not what you might expect from Frank Capra if you believe most of what you’ve read about him. The first important point that is very easily overlooked is that the movie clearly tells us that Longfellow Deeds inherited a fortune a $20 million and it clearly tells us that his farm distribution plan is going to cost $18 million. So it’s equally clear that Mr Deeds intends to hang on to a couple of million, and in 1936 a couple of million dollars was enough to make you very very rich. Mr Deeds intends to give away the surplus money that he doesn’t need but he’s not such a blockhead as to give away his entire fortune. 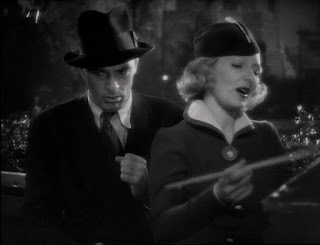 It’s also interesting that his scheme is to resettle the unemployed on family farms. This is in fact an ultra-conservative notion. It’s not an idea that would find favour with socialists or New Deal Democrats. It’s an idea that demonstrates an overwhelming desire to reject the modern world entirely, to reject socialism and capitalism in equal measure, and go back to the world of 19th century Small Town America. Mr Deeds does not see utopia in the visions pushed by politicians. He sees utopia in the simpler life of small rural communities living close to the land. This is a guy who qualifies as an out-and-out reactionary.

It has to be said that this is one of the corniest movies ever made. But it also has to be said that it doesn’t pretend otherwise. It wears its corniness on its sleeve. That can be difficult to take. You just have to accept this movie on its own terms. If you’ve grown tired of fashionable cynicism or fashionable irony then you might find this corniness oddly appealing. 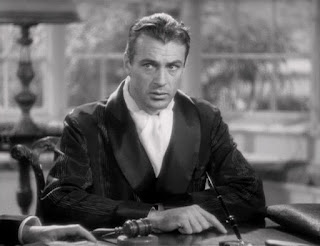 I don’t think this film would have worked with anybody but Gary Cooper. He has the ability to make you believe that a guy like Longfellow Deeds really could exist. He has a totally relaxed approach to the rôle. Mr Deeds could have been unbearable smug or precious or self-righteous. There are just so many ways this character could have failed to work.

Jean Arthur is odd but her performance sort of works.

If you accept that Mr Deeds Goes To Town is a movie that has no truck whatsoever with realism and that Capra likes to do things in ways that would horrify most other directors then the corniness and the contrived plot twists become oddly enjoyable. While I detest message movies I wasn’t overly bothered by this one because the message was one that would have been anathema to both Republicans and Democrats at the time - it was like a back to the future political message.

Mr Deeds Goes To Town is a strange experience but much to my surprise I enjoyed it. Recommended.
Posted by dfordoom at 7:01 PM