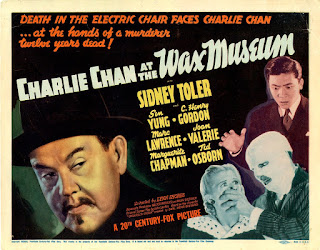 By the time Charlie Chan at the Wax Museum went into production at 20th Century-Fox in 1940 Sidney Toler had well and truly settled into the rôle of Charlie Chan. This was his sixth Chan film.

It starts with a dramatic courtroom scene. A hoodlum is sentenced to death, on Charlie’s evidence, vows revenge and shoots his way out of the courtroom after seizing a deputy’s gun.

Steve McBirney (Marc Lawrence) is the hoodlum in question and he doesn’t do what the police expect him to do. He doesn’t try to leave the city. Instead he takes refuge in the wax museum of Dr Cream (C. Henry Gordon). Dr Cream had another profession before opening his wax museum - he was a plastic surgeon and apparently a very good one. He also apparently did quite a few surgery jobs for members of the underworld, giving them new faces. Now McBirney wants Dr Cream to give him a new face as well. 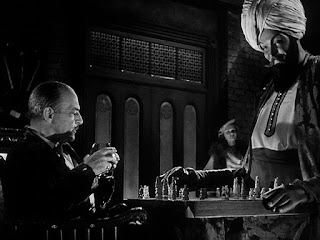 While the police hunt unsuccessfully for McBirney Charlie accepts a challenge to a radio debate over a celebrated crime that had been a sensation a few years earlier. That crime was solved, but Charlie was never happy about it. He had a strong suspicion an innocent man may have been convicted. He also thinks there may be a connection with Steve McBirney. The fact that Dr Cream is involved with the broadcast makes this seem even more likely.

That old case was particularly convoluted. Two partners in crime who were also partners with a third man (an honest man) in a perfectly legitimate business. There was jealousy and murder, and a revenge killing, but Chan has doubts about pretty much the entirety of the established story. 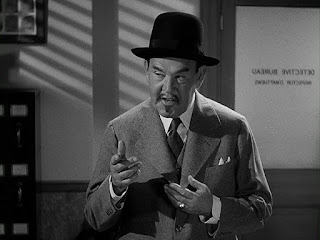 The radio broadcast leads to more murder. Charlie is lucky not to have been the victim. The murder method at first seems ingenious but it turns out that actually a totally different but also ingenious method was employed. The murderer had to be one of the small number of people in the wax museum at the time of the broadcast. There’s no shortage of suspicious characters amongst them and that’s not counting the ones who were hiding and weren’t discovered until after the murder.

As you would expect from a movie with a wax museum theme this entry in the Chan cycle has a bit of a gothic tinge to it. The wax museum is not just an ordinary wax museum. It is a museum of crime, devoted entirely to gruesome and brutal murders. And of course whenever the action switches to the wax museum there seems to be a thunderstorm raging (which adds a slight Old Dark House feel).

This is a movie that is visually fairly impressive by B-movie standards. The wax museum is genuinely creepy, the sets are very good, there are some fun props (such as the mechanical chess player automaton). Director Lynn Shores keeps things lively and interesting. 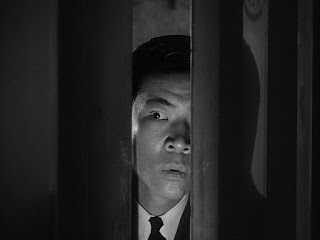 The acting by the supporting cast is reasonable B-movie standard. C. Henry Gordon is subtly sinister as Dr Cream. Joan Valerie is very good as his beautiful but slightly exotic and slightly disturbing assistant Lily Latimer. Marguerite Chapman is OK as the Feisty Girl Reporter who is there because a B-movie should have a Feisty Girl Reporter. Michael Visaroff quite correctly hams it up as the forensic psychiatrist (and probably charlatan) Dr Otto Von Brom. 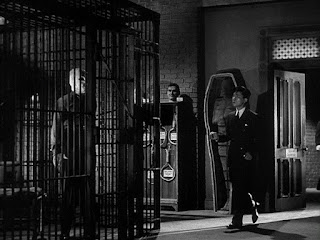 This movie is part of the Charlie Chan vol 5 boxed set which is very light on extras but on the other hand it does include no less than seven movies. Charlie Chan at the Wax Museum gets a very satisfactory transfer.

Charlie Chan at the Wax Museum has a decent mystery, it has some mild thrills, it has effective atmosphere. The comic relief is kept to a minimum and is non-irritating. It’s best not to think too much about the plot, but that’s OK because this is the kind of movie that exists in a universe in which the villains come up with insanely complicated criminal plots that would never work in real life. But this is not real life and it’s not meant to be. The world of Charlie Chan movies is in most respects preferable to real life anyway.

Charlie Chan at the Wax Museum is a satisfying little B-picture. Highly recommended.
Posted by dfordoom at 4:00 PM