Jim Harding (Douglass Montgomery) had been a brilliant chemistry student. Now, retuned from the war, he’s reduced to peddling patent medicines at a fairground stall. He’s in partnership with his wartime sergeant, Dan (Ronald Shiner). He knows he made a disastrous marriage but he’s now starting to realise just how disastrous it was. It’s because of his wife Diana (Patricia Burke) that he’s in the patent medicine racket - his old job as a chemist didn’t pay enough for her liking. Now she’s trying to get back into show business by an all-too-familiar route - the casting couch. As she has no morals to speak of this doesn’t bother her.

Meanwhile Jim has met Jeannie Thompson (Hazel Court), a thoroughly charming girl who also works at the fairground. You will doubtless not be shocked when I tell you that Jim and Jeannie soon fall madly in love.

One of the more startling things about this film (it is 1949 after all) is just how blatant it is about the affair between Jim and Jeannie. He is clearly sleeping at Jeannie’s flat every night and he is clearly not sleeping on the couch.

Jim seems to imagine he can get away with it because his wife is rarely home anyway and maybe she’ll never notice that he doesn’t get home until six o’clock in the morning. And even though they’re making no effort to be discreet at the fairground maybe nobody else will notice and tell Diana. Jim is a brilliant chemist but when it comes to ordinary life he’s just a tiny bit naïve. Apart from this he’s also inclined not to think things through and to take the easy way out, or take the way that seems to offer him immediate gratification. He’s just not sufficiently grown-up to understand that actions have consequences. When he decides to take action he can’t face the idea of having to follow through on it or accept the consequences. 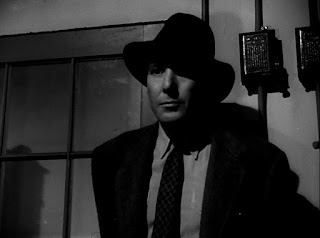 There is a touch of film noir here. Jim is basically a decent enough fellow but his weakness of character gets him into trouble and could get him into very big trouble indeed. In this case the irony is that it’s the Good Girl type (Jeannie) rather than the Femme Fatale type (Diana) who leads him into the abyss. Jim thinks he’s found what he’s always wanted and he’s determined to have it and have it now even though commonsense would suggest the wisdom of proceeding slowly and cautiously.

There’s also a definite hint of noir visual style with quite a few night shots and a few quite effectively moody sequences. Hone Glendinning’s black-and-white cinematography is not flashy but it’s quite impressive. 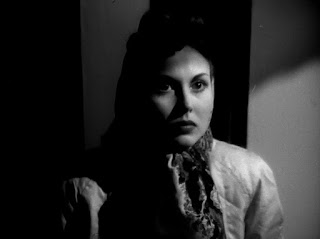 The fairground setting also (to me at least) gives an impression of noirness - cheap seedy glamour, the sense of an outsider community and of course a feeling of artificiality.

Douglass Montgomery was the sort of American actor who pops up in these late 40s/early 50s British crime films. He had seemed on the way to stardom in the 30s but by 1949 his career had pretty much spluttered out. Which meant he would work for a very modest pay cheque but still give the movie the transatlantic flavour that seemed so terribly important to the people running the British movie and TV industries in the postwar period. He’s an actor I’ve never encountered before but he does a decent job. Jim Harding is a bit of a fool and he is technically being just as immoral as his wife but Montgomery is able to convince us that he’s well-meaning and perhaps even convince us that he’s as much a victim as a villain. 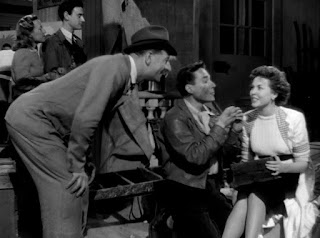 Hazel Court was of course one of the great British actresses of this era and she’s terrific as always. She plays Jeannie as a woman who is a bit of an innocent, thinking that love is all that matters, and not really knowing what she’s getting herself into.

Patricia Burke as Diana is in full-on bitch mode right from the start and she does it magnificently.

There’s a slight class subtext here. Both Jim and Diana are upper middle class and educated. Jeannie is working class and uneducated. Their relationship was always going to face some difficulties even without the Diana problem.

The supporting cast is very good. Ronald Shiner as Dan is mainly a comic relief character but he’s a likeable and genuinely amusing rogue. 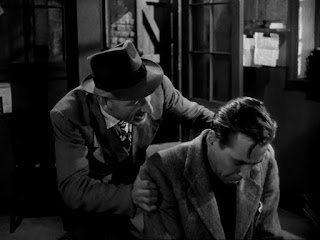 Network’s region 2 DVD release also includes a different cut of the film, released as Scarlet Heaven. The transfer is extremely good. Forbidden has also been released on DVD (again in Region 2) by Odeon Entertainment.

I wouldn’t go so far as to claim it’s a Neglected Gem but Forbidden is a solid crime thriller with a few touches that are likely to make it of interest to film noir fans as well as fans of British mystery thrillers of this period. The plot mostly consists of well-worn clichés but it has a couple of reasonable twists at the end. It’s nothing startling but it’s well-made and well-acted and looks good. Recommended.
Posted by dfordoom at 12:05 AM