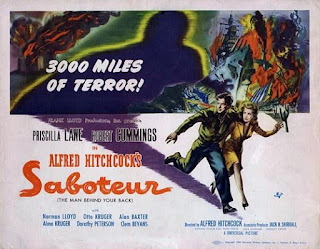 Saboteur isn’t numbered among Alfred Hitchcock’s great films, and it’s not difficult to see why. This 1942 wartime thriller has some terrific moments and some superb visual set-pieces, but it just doesn’t quite come together. The biggest problem lies in the casting, and in the fact that it’s a virtual remake of his classic The 39 Steps.

The basic premise - an innocent man on the run after being wrongly accused of a crime - is a theme Hitchcock returned to again and again. In this case we have an act of sabotage in an aircraft factory, and a young and rather naïve worker (Barry Kane, played by Robert Cummings) finds himself the chief suspect. He encounters the inevitable blonde (played by Priscilla Lane) and gets into a series of scrapes and narrow escapes from both the law and the real saboteurs. 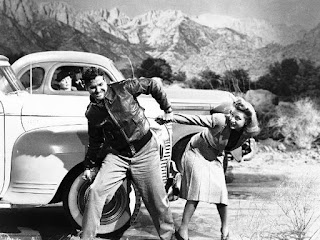 Unfortunately Robert Cummings, while being likeable enough, lacks the combination of charm and that slight edge of ruthlessness that made Robert Donat such a compelling hero in The 39 Steps. And Priscilla Lane makes a very bland heroine in comparison to Madeleine Carroll. There’s also a complete lack of romantic chemistry between the two leads. The supporting players are much more impressive - Norman Lloyd is nicely sinister as the real saboteur, Alan Baxter is wonderfully twisted as a quietly spoken but very disturbing killer, and Otto Kruger is perfectly oily as the leader of the saboteurs.

Perhaps the most interesting thing about the movie is the nature of the people that Kane accidentally encounters along the way. They’re all misfits or outsiders in some way. The characters who seem like the most upright and decent all-American solid citizens turn out out to be murderers and traitors, while the misfits and outsiders turn out to be the decent people who genuinely do the right thing. He comes across a kindly blind man whose mistrust of the officers of the law seems almost as extreme as Hitchcock’s own notorious dislike of the police, but the blind man’s insight into human nature is sound and leads him to do the correct thing even though it means lying to the police. 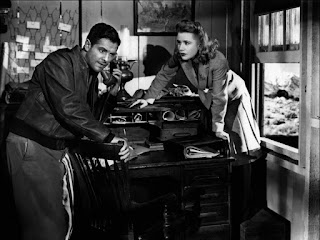 A collection of circus freaks gives a compelling lesson in the real meaning of democracy and justice. And a jovial truck driver with no love for the police either acts from an instinctive understanding of the requirements of humanity.

One can’t help feeling that the Production Code Administration must have been taken in by  the movie’s apparent patriotic message and that they failed to notice that the movie is actually quite sceptical of patriotism when it’s combined with unthinking zeal and unreasoning suspicion. 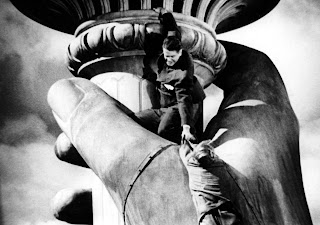 The movie ends with two spectacular set-pieces. There’s a real shootout in Radio City Music Hall that occurs while a make-believe shootout occurs on the screen, and there’s the famous climax on the Statue of Liberty. Both are superbly executed, and they’re sufficient reason on their own to make this movie worthwhile.

Despite its undoubted flaws Saboteur has plenty of other skilfully rendered moments of suspense as well, and it’s undeniably entertaining. While it's not in the same league as the best of his 1940s movies such as Shadow of a Doubt and Notorious, even a Hitchcock movie of the second rank is still very much worth seeing.
Posted by dfordoom at 5:34 PM