Tailspin Tommy in the Great Air Mystery is a 12-chapter 1935 Universal aviation adventure serial. And it’s a pretty spectacular example of the breed. This was actually a follow-up to Universal’s 1934 Tailspin Tommy serial.

Tommy Tompkins (known as Tailspin Tommy and played by Clark Williams) and his pal Skeeter Milligan (Noah Beery Jr) work for Three Point Airlines. Their latest job is surveying an oil pipeline on the Pacific island of Nazil. The survey will be made by dirigible but the dirigible meets the fate that alas usually met such beasties - it runs into a typhoon and crashes. Just as Tommy has performed the daring feat of docking with the dirigible in mid-air. 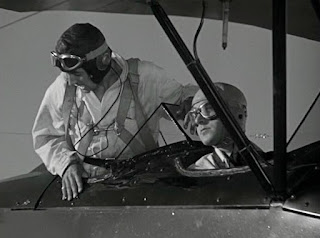 There’s a virtual civil war raging on the island over control of both the island and the oil. It’s a war between two branches of the Casmetto family (there are two brothers who both seem to think they own the whole island) and there’s a traitor in the camp of the good guys. The bad guys also have an air force, led by a mysterious pilot with XX on his flying helmet. There’s also another mysterious pilot, known as The Eagle, who seems to be on the side of the good guys but no-one has any idea of his identity. There’s also a jovial Irish chef who is really a newspaperman and we’re not sure at first which side he’s on but he’s certainly in the thick of things.

The plot has all the standard serial elements with narrow escapes, the heroes getting captured, the heroine getting captured, a few double-crosses and an abundance of action. And of course a touch of romance. Betty Lou is clearly crazy about Tommy and Inez Casmetto, daughter of the good Casmetto brother, obviously thinks Skeeter is kinda cute. 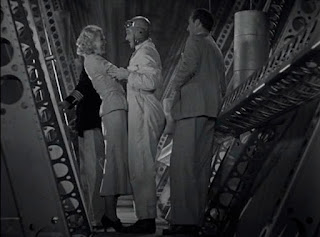 Clark Williams as Tommy is an adequate hero. Noah Beery Jr as Skeeter steals every scene he’s in. Jean Rogers is adorable as feisty gal pilot Betty Lou Barnes. Needless to say she’s constantly getting herself into scrapes. There’s the usual assortment of heavies. The chief villains are certainly ruthless although perhaps not as colourful as one might like.

The aerial sequences are absolutely superb and are mostly original with surprisingly little use of stock footage. There are lots of dogfights but they’re mostly inconclusive, which of course is intentional - you don’t actually want the good guys shot down and you don’t want the bad guys shot down either, at least not until you’re getting close to the final chapter. While the bad guys and The Eagle have machine-gun on their aircraft Tommy’s aircraft is unarmed so when it comes to a dogfight he has to improvise a bit (such as tossing hand grenades at his aerial opponents). Perhaps it was felt that if Tommy flew an armed plane it would make him seem less of an insanely brave hero. 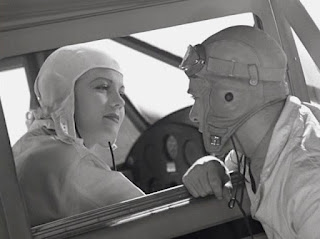 Most of the cliffhangers involve impending aerial disasters although sometimes the mix is varied a bit. Apart from air combats there’s plenty of gunplay on the ground. And since this is a serial there are of course some hidden passageways and some dungeons!

There’s certainly no faulting the job done by director Ray Taylor. He keeps things moving along and mostly avoids the slow patches that bedevil lesser serials. Serials are by their very nature formulaic and repetitive. The trick is to keep coming up with clever variations on the standard plot devices and cliffhanger endings. This serial on the whole manages to do that. 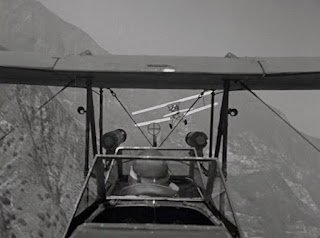 One thing that amuses me is that Nazil is supposed to be a Pacific island but everybody seems to be Mexican. And it all looks rather Californian.

An unfortunate feature of most serials is the flashback episode comprised mainly of footage from previous chapters. Happily there is no such episode in this serial.

The DVD (I believe there’s also a Blu-Ray) from VCI offers extraordinarily good transfers. Which is a major bonus in this case since the flying sequences look particularly impressive.

Tailspin Tommy in the Great Air Mystery is a fairly conventional serial but it’s extremely well executed and it has terrific aerial stunts. Very highly recommended.
Posted by dfordoom at 10:32 AM