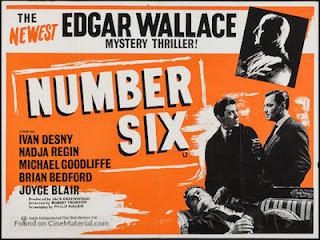 Number Six is one of the many Edgar Wallace adaptations done by Merton Park Studios in Britain in the early 60s. It’s an enjoyable little crime B-movie.

Charles Valentine (Ivan Desny) has never been convicted of any crime. In fact there’s never been enough evidence even to charge him. Nonetheless the police in several countries are very interested in Mr Valentine. He has had a number of very wealthy girlfriends, all of whom have met with sudden and very fatal accidents. He is strongly suspected of being a kind of modern Bluebeard. Now that he has taken up residence in the United Kingdom Detective Superintendent Hallett (Michael Goodliffe) of Scotland Yard is very interested in him indeed. Interested enough to give Number Six the job of keeping a very close eye on him. Only Superintendent Hallett knows the identity of Number Six. He could be one of a number of people close to Mr Valentine. 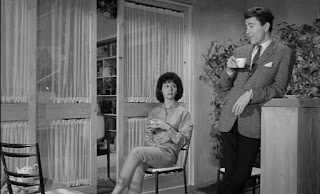 Valentine has also acquired an associate, Jimmy Gale (Brian Bedford). Jimmy has a talent for disposing of inconvenient people, disposing of them in a very efficient manner. Jimmy has already made himself indispensable by eliminating a man who tried to kill Valentine.

The mystery element here is the identity of Number Six. There are only a few possibilities but we’re still kept guessing, and of course Charles Valentine is also kept guessing. He knows of the existence of Number Six because Superintendent Hallett made a point of telling him. It’s Hallett’s idea of psychological warfare. It’s the sort of thing Hallett enjoys  and it’s not a bad idea at that. 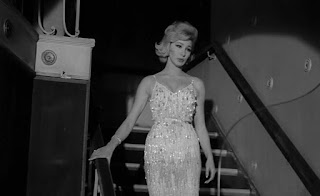 There is a clue to Number Six’s identity and like me you may end up kicking yourself for not noticing it.

The suspense element of course is whether Nadina Leiven will escape the fate of the other unfortunate young ladies who have become involved with Charles Valentine.

The acting is what one has come to expect of these Merton Park films. There are no big names but quite a few faces that will be familiar to fans of British movies and television of the era and the whole cast is extremely good. Ivan Desny is suitably smooth and sinister as Valentine. Michael Goodliffe (known to fans of cult TV as Hunter in the second season of Callan) was always good at this type of rôle. Superintendent Hallett is a cheerful sort of policeman, addicted to crossword puzzles, willing to take risks but always very confident that he’s going to get his man. Nadja Regin is wonderful as the foolish spoilt brat Nadia. Brian Bedford is very creepy as Jimmy Gale. Joyce Blair adds some additional glamour as one of Valentine’s ex-girlfriends, nightclub singer Carol Clyde. 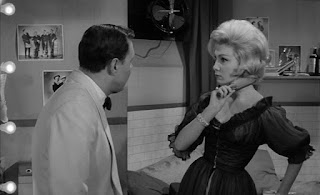 Robert Tronson made few feature films but had a very successful career as a television director. He does a brisk efficient job here. Screenwriter Philip Mackie provides quite a clever and nasty little plot. Mackie went on to do excellent work as a television writer for some of the most interesting British crime series of the 60s and 70s like Mr Rose, Raffles and The Rivals of Sherlock Holmes.

The low budget is not a problem. In fact it’s not really a problem in any of the Merton Park Edgar Wallace movies. Solid scripts and fine acting are the things that distinguish a good B-movie from a bad one and Number Six has both of these highly desirable ingredients. 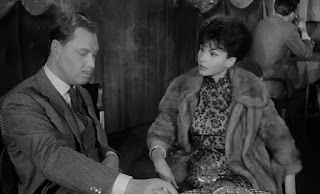 This film forms part of Volume 3 of Network’s Edgar Wallace collections. Volume 3 contains seven Wallace films plus a bonus film, Breakout. There are no extras apart from the illustrated booklet which includes brief essays on the films by Kim Newman. The anamorphic transfer is very good.

Number Six is a well-crafted and thoroughly enjoyable example of the art of making B-pictures. It is highly recommended.