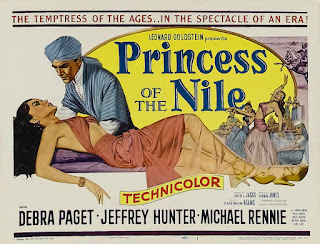 It is 1249 and Egypt is groaning under the heel of the Bedouin warriors of the wicked Rama Khan (Michael Rennie). The virtuous Prince Haidi (Jeffrey Hunter), the son of the Caliph of Baghdad, has just arrived on the scene and he is not pleased with what he finds. The people seem to be on the brink of revolt, his trusted aide and friend has just been killed by a slab of masonry hurled from a rooftop by a member of the disgruntled populace and he has just been knifed by the beautiful fiery dancing girl Taura (Debra Paget). This sets the stage for Princess of the Nile, a lightweight but entertaining 1954 Technicolor costume epic.

Rama Khan is determined to destroy Prince Haidi and the feeling is mutual. The odds seem to favour Rama Khan, or they would favour him except that Rama Khan has another deadly enemy in the person of Taura. And he soon finds himself with a new enemy, the Princess Shalimar, daughter of the nominal ruler of Egypt, Prince Selim (the actual ruler is of course the Caliph in Baghdad). In fact the two women are one and the same woman, Taura being merely a disguise the princess puts on so she can keep in touch with the mood of her people. Of course it’s absolutely obvious to the viewer that Taura and the princess are the same woman but we’re expected to believe that nobody has ever noticed the resemblance. 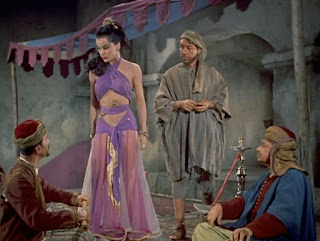 Rama Khan is in cahoots with the evil Shaman who is plotting with Rama Khan. Taura on the other hand has the thieves of the city behind her and they prove to be quite formidable.

I must say I’m a bit doubtful that a good Muslim woman like the princess would be offering up prayers to the goddess Isis. I rather suspect that the writers’ ideas about 13th century Egypt were somewhat sketchy. 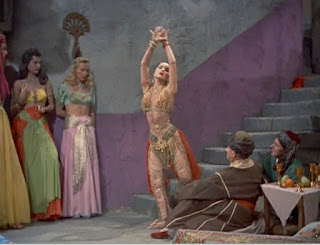 Mostly this movie looks great although some of the matte paintings make the limited budget a bit obvious. There are some reasonably good action scenes, although of course full-scale battle scenes would have been too much of a stretch.

The underwater secret passageway leading from her bathtub which is employed by the princess to leave the royal palace discreetly is a nice touch.

The movie’s biggest minus is that the plot is thin and at times stretches credibility (even by the standards of costume epics). There’s also Jeffrey Hunter, a bit too stolid for this sort of movie. Michael Rennie is not a favourite of mine but he does quite well as Rama Khan. 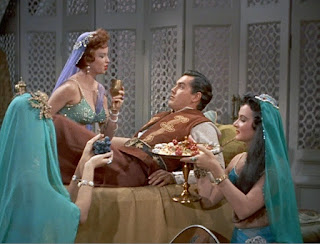 Luckily there are plenty of pluses. The costumes are gorgeous. The support cast is excellent and it includes Michael Ansara, a particular favourite of mine. Also look out for Lee van Cleef in a blink-and-you’ll-miss-it bit part. There are lots of handmaidens so here’s a plethora of feminine pulchritude on display.

And there’s Debra Paget. First off she has a stunning figure and her costumes are artfully designed to ensure that we don’t overlook that important fact. She does a lot of dancing. Her dances are supposed to be sexy, and they are. She also gets to do some sword-fighting! And she’s perfectly cast. She’s tempestuous and passionate and headstrong and very keenly aware of her effect on men. She has the fiery temper you expect in beautiful princesses and glamorous dancing girls. Debra Paget’s problem as far as her career was concerned seems to have been that she was the right actress to play sexy temptresses in movies such as Princess of the Nile and when that genre began to fade her career faded. She gave up acting at the age of 30 to marry a millionaire. Princess of the Nile was her one real taste of stardom. A pity because she does the temptress thing with great style. 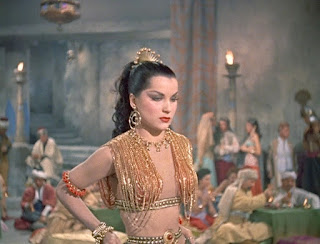 The Fox Cinema Archives made-on-demand release is an open matte transfer. Image quality is terrific. There are of course no extras.

This is very much B-movie stuff although it’s rather lavish for a B-movie (it was produced by Panoramic Productions which made lower budget films for 20th Century-Fox distribution). It’s a fun adventure flick but the main reason to watch it is to see Debra Paget strutting her stuff. Which she does so well that Princess of the Nile can be highly recommended.
Posted by dfordoom at 10:37 PM