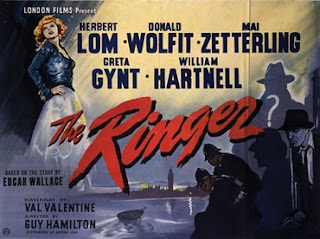 The Ringer is a 1952 British crime thriller directed by Guy Hamilton (in fact is was his first directing assignment) and based on one of Edgar Wallace’s more celebrated potboilers.

The Ringer is a master criminal who had been on the run from the police of various nations until his untimely death in Australia. Now Scotland Yard has reason to believe that the Ringer is alive and is in London. They’re hoping that a small-time burglar named Sam (William Hartnell) can help them to track him down, Sam is one of the few people who has seen the Ringer face-to-face and lived to tell the tale (the Ringer is known to be a master of disguise). Sam is not keen on the idea of helping the Yard but he’s not given much of a choice.

One of the reasons the police are convinced the Ringer is back is that his glamorous wife, Cora Ann (Greta Gynt), has suddenly turned up in London. 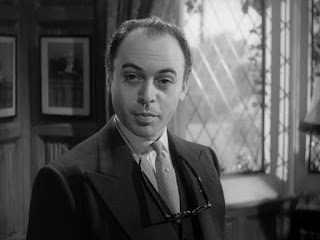 Oddly enough Scotland Yard knows the Ringer’s name. It’s Arthur Milton. But this doesn’t help them since they have no idea what he looks like.

The return of the Ringer is a matter of some concern to a very successful although perhaps not very ethical lawyer named Meister (played by Herbert Lom). He was supposed to be looking after the Ringer’s sister but she unfortunately killed herself. At Scotland Yard it is surmised that the Ringer might therefore feel he has a score to settle with the lawyer. Meister is also inclined to think that this might be a possibility.

Scotland Yard are taking the matter very seriously. Meister is given police protection. The Superintendent in charge of the case is being assisted by a professional criminologist, Dr Lomond (Donald Wolfit). Meister’s home is turned into a kind of fortress, under Sam’s supervision (being a professional burglar he is something of an expert on security). 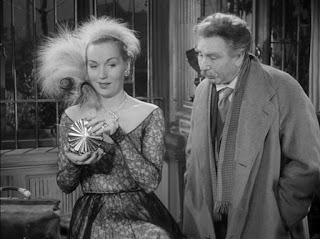 Meister’s secretary is a young Austrian woman named Lisa (Mai Zetterling). Lisa has had some misunderstanding with the British authorities over her visa but Meister has sorted these problems out for her. Meister is very kind to Lisa and is very fond of her, in a fatherly affection sort of way. Or perhaps his affection is a little more than fatherly? Perhaps his affections for the Ringer’s sister were a little more than fatherly as well. That, and the sister’s suicide, might explain why the Ringer has a grudge against Meister. Lisa has been patiently waiting for her fiancé Johnny (played by a very young Denholm Elliott) to be released from prison.

Now Johnny is out and they can be married, much to the delight of all although Meister’s joy at the news of Johnny’s release seems a little forced.

The suspense slowly builds. Meister is under siege is in his own home. He knows, and everybody knows, that the Ringer will strike eventually. The only question is when. And of course how. 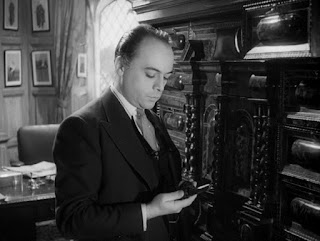 It’s not very difficult to guess the Ringer’s identity but that just increases the suspense - how on earth is he going to kill Meister when Meister isn’t leaving his house and the house is crawling with coppers? We know that the Ringer is not the sort of criminal who commits a crime unless he is certain he can get away with it, which in this case seems like an impossibility.

It’s difficult to make a bad movie based on an Edgar Wallace thriller. His books were just so perfectly suited to film adaptation. Guy Hamilton may have been a novice director but he was a very talented novice director and both he and experienced screenwriter Val Valentine know what they’re doing.

And of course the film has Herbert Lom, always a very big plus. Meister is smooth, charming, clever, calculating and sinister - the sort of rôle Lom always relished. And he’s in top form here. William Hartnell is great fun as the likeable cockney thief Sam. The whole cast is very solid but Lom and Hartnell are the standouts. 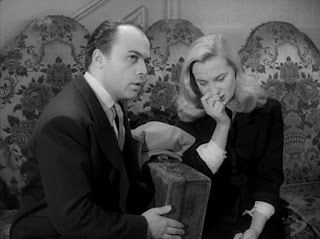 It was based on a play but Hamilton manages to avoid a stodgy stagebound feel even though most of the action takes place on just a couple of sets.

This is a movie that could not possibly have been made in the US in 1952 - it would have fallen foul of the Production Code on numerous counts.

Network’s Region 2 DVD offers a very handsome transfer. The movie is in black-and-white and is in the correct 4:3 aspect ratio.

The Ringer is wickedly delightful. It’s witty and clever, it has a great cast and a great performance by Herbert Lom. Very highly recommended.
Posted by dfordoom at 3:18 AM