elsewhere in the blogosphere 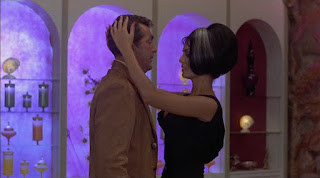 Michael’s Movie Palace has a review of the deliciously campy and trashy The Carpetbaggers (1964), a movie that is a real guilty pleasure of mine. My own review can be found here.

At Laura's Miscellaneous Musings there are reviews of Ziegfeld Follies (which I’m now tempted to buy) and Green Dolphin Street (which I know I should get around to seeing).

Riding the High Country has a review of an Anita Ekberg western, Valerie. I had no idea she’d ever made a western but it sounds like an interesting movie.

Real Weegie Midget Reviews has a review of what sounds like an absolute fascinating Bing Crosby TV movie, Dr Cook’s Garden. A dark chiller with Bing has to be worth a look.

As far as my own blogs are concerned, at Cult Movie Reviews I’ve done write-ups on the wonderfully stylish French crime/adventure thriller Fantomas (1964) and the amusing Matt Helm romp The Silencers (1966).

At Cult TV Lounge you’ll find my thoughts on the most infamous episode of The Avengers, A Touch of Brimstone and one of the original Six Million Dollar Man TV movies, The Solid Gold Kidnapping (which is much more James Bondian than the TV series).