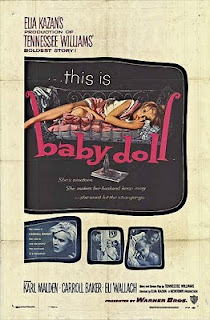 Baby Doll was adapted by Tennessee Williams from two of his early one-act plays, and directed by Elia Kazan. On its release in 1956 it was described by Time Magazine as: "Just possibly the dirtiest American-made motion picture that has ever been legally exhibited." And who am I to argue with Time Magazine? In fact it’s the sort of movie you really can’t watch without feeling vaguely dirty. Which of course is precisely the point. This is a movie about sexuality repressed until it starts to fester, and the poison spreads through the whole body. It’s about dirty minds, diseased souls and a corrupt society.

And did I mention that it’s also extremely funny? Because yes, it’s definitely a comedy. And while it might be the least ambitious of the many 1950s attempts to bring Tennessee Williams to the big screen, it’s arguably the most successful. While it’s played as comedy, it works as an absolutely devastating critique of the society it depicts.

Archie Lee Meighan, a middle-aged decaying wreck of what was never much of a man to begin with, lives in a crumblin 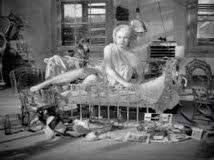 g ruin of a southern mansion with his 19-year-old bride Baby Doll. When Baby Doll married Archie Lee she explained that she was too young for marriage, so they made an agreement. They would delay the consummation of the marriage until her 20th birthday. As the movie opens Baby Doll is asleep in her crib in the nursery, sucking her thumb, while Archie Lee is drilling a hole in the wall so he can watch her. That pretty much sums up the tone of what is to follow. 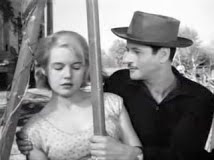 owner, the Sicilian Silva Vaccaro, does not believe for one moment that the fire was an accident. He spends the whole of the following afternoon alone in Archie Lee’s house with Baby Doll, trying to get Baby Doll to admit the truth, while an elaborate seduction is played out. When Archie Lee arrives home it is painfully obvious that Baby Doll is a little girl no longer, but a woman.

The most surprising thing, given that this is 1956, is that so little is implied. We are not given hints that Baby Doll is still a virgin; the embarrassing facts of Archie Lee’s marriage are stated openly. The movie was greeted with howls of outrage by Am 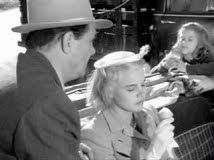 erica’s moral watchdogs, and was condemned by the Legion of Decency. America’s Catholics were informed that seeing this movie would be regarded as a mortal sin. What is really surprising is that it was passed by the Production Code Administration. Sex was now well and truly out of the closet. Hollywood was clearly growing up.

Carroll Baker as Baby Doll oozes sex. Karl Malden gives a wonderful completely over-the-top performance as Archie Lee. Eli Wallach is equally good as the charming but calculating Vaccaro. Half a century later this is still very much a movie for grownups. It absolutely reeks of sex, decay and corruption. I loved it.
Posted by dfordoom at 2:02 AM