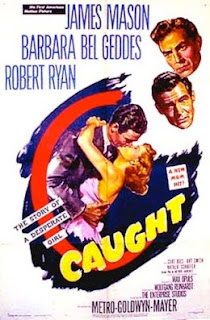 Caught was one of Max Ophüls’ handful of Hollywood movies. Although often described as a film noir it’s really a romantic melodrama done in film noir style.

Barbara Bel Geddes is Leonora Ames, a poor girl who dreams of marrying a rich man to escape from the misery and boredom of poverty. Charm school and a modeling career seem to offer the perfect opportunities to fulfill this fantasy. This dream is the trap in which she is caught. She meets her multi-millionaire, Smith Ohlrig (played by Robert Ryan), and she marries him. Unfortunately he turns out to be emotionally dead and obsessed with the desire to exercise absolute control over his employees, among whom he includes his wife. Realising she has made a very big mistake indeed she leaves him and finds employment as receptionist to idealistic paediatrician Dr Larry Quinada (James Mason) who works in a slum neigbourhood. But escaping a man like Smith Ohlrig proves to be rather complicated.

Smith Ohlrig was widely rumoured to be based on Howard Hughes, and to reflect Ophüls’ own feelings about what it’s like to be to deal with an immensely wealthy and powerful man who considers people to be merely possessions to be bought and sold. Ophüls had worked briefly for Hughes and the experience had been very very unpleasant. Ohlrig certainly has the hypochondria and the paranoia of Hughes, which lends credence to the theory. So although the script is credited to Arthur Laurents one assumes that Ophüls must have had a considerable influence on it.

The character of Leonora is both the most interesting feature of the film and its greatest weakness. In a society that offered women few career choices outside of marrying money, but at the same time idealised marriage and 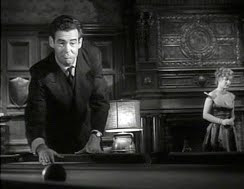 romance and also preached an incredibly narrow and repressive sexual morality, women were forced into a fairly elaborate form of self-deception. Most of Leonora’s problems stem from this, and from the distorted view of reality that such self-deception inevitably leads to. The fact is that her one ambition was to marry money, and she succeeded in her objective. But she was incapable of admitting to herself that that was what she had done. So she constructed a fairy-tale romantic fantasy about a man she hardly knew.

The problem with all this is that it makes it difficult to feel the necessary degree of sympathy for Leonora, who remains so blinded by her obsession with money that she continues to make obviously disastrous decisions. She is unwilling to renounce her dream world. The role would be a challenge for any actress, and Bel Geddes is simply not equal to the task. Robert Ryan overacts outrageously, but it’s still a compelling performance. What makes it truly chilling is that he plays Ohlrig as a powderkeg waiting to explode, but he’s such a control freak that he won’t let himself explode. So the tension within him (and within the audience) just goes on building up. James Mason has a deceptively difficult 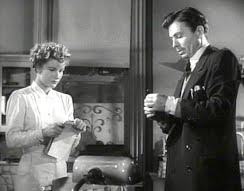 role, playing a character who could easily have come across as annoyingly noble. But Mason’s easy charm allows him to avoid this pitfall and he is able to make Dr Quinada both believeable and likeable.

Ophüls and cinematographer Lee Garmes have created an exceptionally stylish movie in Caught. It really looks superb, and there are some wonderful tracking shots. There’s a particularly effective scene in which Dr Quinada and his partner discuss Leonora while the camera twitches wildly back and forth between the two doctors at opposite ends of the room and the empty chair (Leonora’s chair) between them.

The ending has been much criticised as a cop-out forced upon Ophüls but it’s actually quite clever, managing to keep a timid studio and the Production Code people happy while reinforcing the movie’s savage attack on contemporary American sexual and social mores. It’s one of the most interesting movies to come out of Hollywood in the 40s, and well worth tracking down.
Posted by dfordoom at 12:42 AM