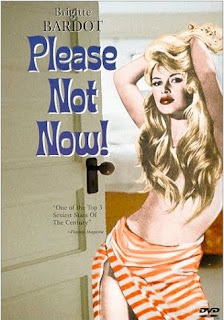 Please, Not Now! (La Bride sur le cou) is a lightweight but a amusing French comedy. It was undoubtedly considered a little on the risque side in 1961 although it seems rather quaintly tame today. It succeeds mostly because of its star, Brigitte Bardot. She’s likeable, zany without being annoying, and utterly charming. She’s also a more than competent comic actress.

Bardot is a model named Sophie who has been dating her photographer boyfriend Philippe for 18 months. She spends a lot of time looking for apartments where they can settle down in domestic bliss. Philippe however is a handsome gold-digger and he has set his sights on a wealthy American woman, Barbara. When her grandmother found herself in this situation with a man who was cheating on her, she dealt with in in traditional Corsican fashion. She took a rifle and she shot the other woman. At her trial she was naturally acquitted (this is France and this was a crime of passion) and as a result she got her man back and lived happily ever after. Sophie believes in the importance of family traditions, and armed with a rifle she sets off in search of Barbara.

In the meantime she has encountered two sex-starved young doctors, and one of them has fallen for her in a big way. He convinces her that the best way to have her revenge is not through murder but by making Philippe jealous by sleeping with another man. As a gentleman Alain is happy to volunteer his services. What follows is a good-natured bedroom farce.

It works mostly because of Bardot. She has a sparkling personality and she’s genuinely funny. She elevates what could have been a fairly routine romantic comedy into something with real zip. Roger Vadim took over the director’s chair from Jean Aurel during the course of the production and he handles the task with flair and a nice lightness of touch. The movie is part romance, part screwball comedy and part sex comedy, with just the slightest dash of slapstick. The French have a tendency to be over-fond of slapstick but fortunately Vadim keeps this to a minimum. At not much over 80 minutes the movie maintains a frenetic pace. The performa

nces in general are good, but Bardot has the star quality.

Bardot’s nude dance sequence earned the movie some notoriety at the time. It wouldn’t attract too much attention today except for the fact that this is Bardot, an actress with a degree of exuberant sex appeal that most modern actresses can only dream of.

It’s a thoroughly engaging and enjoyable little movie, and a chance to see why Bardot became a legend.
Posted by dfordoom at 3:53 AM