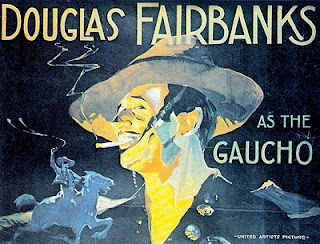 The Gaucho, directed by F. Richard Jones in 1927, probably won’t be found in many people’s lists of cult movies, but it deserves to be. It’s a truly strange movie, an odd but intriguing hybrid. I’m really becoming a major Douglas Fairbanks Snr fan. I saw The Thief of Baghdad a while back and was totally blown away by it (that’s another one that deserves cult status). The Gaucho was another highly original and offbeat Fairbanks vehicle. 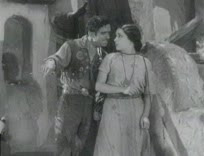 nge mixture works. If, like me, you generally run a mile from anything involving religion don’t panic – the religious angle doesn’t become oppressive and shouldn’t stop you enjoying the picture. It certainly didn’t stop me from enjoying it. The stuff about the plague-like disease, the Black Doom, added yet another layer to the movie.

Fairbanks wrote the screenplays for his own movies and produced them as well as starring in them. And did his own stunts. He was 45 when this film was made – if he was this athletic at 45 I shudder to think what he must have been like when he was 25. The stunts are not only impressive, they’re also clever. Lupe Velez, looking gorgeous as alway 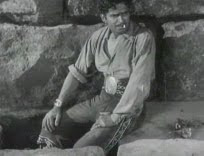 s, provides the romance angle. The scene where they’re dancing together while tied together is pretty sexy even by today’s standards.

You also get to see Mary Pickford doing a cameo as the Virgin Mary!

The Gaucho is a highly entertaining movie with a serious side, and a rather dark side as well. It has a definite hint of the bizarre to it.

My only complaint is that it’s presented on DVD in straight black-and-white – I’m pretty sure it was originally tinted. Highly recommended.

Unfortunately the ridiculously cheap Region 4 DVD seems to be no longer available.
Posted by dfordoom at 2:49 PM