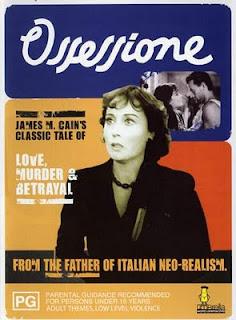 Luchino Visconti’s first feature film, Ossessione, was an unauthorised version of James M. Cain’s novel The Postman Always Rings Twice. Cain’s gritty 1934 novel was ideally suited to the Italian neo-realist style of film-making. I’ve always felt that the 1946 Hollywood movie version suffered from being too clean, not seedy enough, and definitely not desperate enough. And Lana Turner, although she projects the necessary sensuality, looks too much like a Hollywood starlet.

Clara Calamai in Visconti’s film is a lot more earthy than Turner, and seems more authentically working class. She gives a great performance as Giovanna, conveying her mix of calculation and desperation. Massimo Girotti as Gino, the drifter, is more of an innocent. He seems totally unable to make decisions, and gets swept along by events. The uncontrollable lust that draws these two characters together is conveyed extremely well and extremely economically.

The film is much more aware of class, and of the degradations of poverty, than the Hollywood version. There are a few changes from the book, but the essentials of Cain’s plot remain. The photography has a stark beauty to it. The movie also touches on wider issues invol 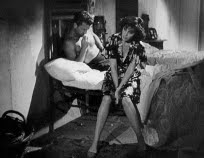 ving sexuality, with Gino’s relationship with a prostitute, and his friendship with another drifter, Lo Spagnola, which has definite homosexual overtones (Visconti himself was of course gay).

While the movie is uncompromising in its treatment of the actions of Giovanna and Gino it steers way from simplistic moralising. It’s made clear that women like Giovanna were left with few options if they wanted to escape from grinding poverty, and it’s made clear that they were often forced by circumstances into loveless marriages that were little different from prostitution. 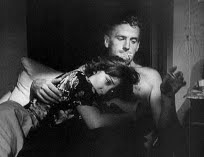 Ossessione represents an intriguingly different approach compared to the two American versions of this story, and it’s an excellent film in its own right. It remains the definitive movie version of Cain's novel.

While it lacks the opulence and obvious decadence of late Visconti, it’s still visually impressive. Visconti was discovering his political consciousness, but the left-wing political slant isn’t overly laboured.

The Region 4 DVD is not a fantastic print at all, but it’s worth picking up if you can find a cheap enough copy.
Posted by dfordoom at 8:40 PM