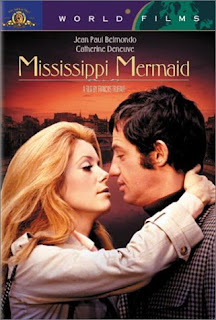 Louis Mahé owns a tobacco plantation Réunion Island, a French possession in the Indian Ocean. Resolving that it’s time he got married, but being rather unsure of himself with women, he resorts to newspaper classified ads. He makes contact with a woman who is looking for a husband, they exchange letters and photos, and eventually decide to marry although they have never actually met. Strangely enough, when his new bride-to-be Julie arrives at Réunion she doesn’t look anything like her photo. She explains that being rather shy and uncertain about answering an advertisement she’d sent him a photo of a friend of hers. Julie is, however, beautiful and charming, and the wedding goes ahead.

François Truffaut’s 1969 film Mississippi Mermaid (La Sirène du Mississipi) was based on a Cornell Woolrich novel, and anyone familiar with Woolrich’s work (which provided the basis for a host of classic Hollywood movies in the film noir and suspense genres, including Hitchcock’s Rear Window) will not be surprised to learn that things and people are not what they seem, and that events soon take a variety on unexpected turns. This i

s a typically twisted and perverse Woolrich plot, but to say any more would be to give away spoilers.

This is one of two movies Truffaut made from Woolrich novels, the other bring the wonderful The Bride Wore Black, and both movies show very clearly the extent of the influence of both film noir and Hitchcock on Truffaut.

With leads as charismatic, sexy and likeable as Catherine Deneuve (who plays Julie) and Jean-Paul Belmondo (as Loui

s) it’s hard to see how this movie could lose, but in fact it was a box-office disaster. Which is a great pity, since it’s actually an extremely good movie. It’s as much a love story (albeit a rather perverse one) as a suspense movie, and perhaps its commercial failure resulted from the difficulty of neatly slotting it into an accepted genre.

Deneueve and Belmondo really are superb, and their intricate and convoluted relationship is depicted with sensitivity and a lack of moral judgments. A very underrated movie, and the MGM DVD release looks sensational as well. Highly recommended!
Posted by dfordoom at 10:35 AM