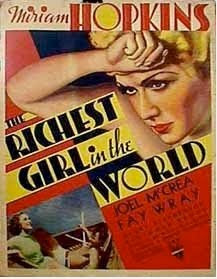 It’s the sort of movie that relies heavily on the personality of its stars to compensate for a rather thin plot. Luckily this one has a cast equal to the job.

Miriam Hopkins is Dorothy Hunter, and she’s the richest girl in the world. When her parents went down with The Titanic in 1912 the two-year-old Dorothy was left in possession of the vast and wealthy Hunter business empire. Now in her early 20s, Dorothy has been shielded from the world by her business managers by an ingenious method. Her secretary Sylvia Lockwood (Fay Wray) appears in public in the guise of Dorothy while Dorothy plays the role of Sylvia. Dorothy has another reason for hiding behind an assumed identity. While she maintains a carefree slightly façade she is in fact a hopeless romantic. She wants love, and most importantly she wants to be loved for herself, not for her fortune. When she meets a man that she could develop serious feelings for she is able to test his love.

Tony Travers is a young good-looking and personable broker. He’s not poor but he’s certainly not even remotely in Dorothy’s league. He thinks the pretty young woman he has just met is Sylvia Lockwood. They hit it off together immediately, but he’s obviously also attracted to the girl he thinks is Dorothy Hunter. The real Dorothy encourages him to pursue the false Dorothy in order to find out if he is most strongly motivated by love or by money. Unfortunately for the real Dorothy Tony’s pursuit of the fake Dorothy seems rather enthusiastic, and he is even contemplating proposing marriage. So will Tony turn out to be just another fortune-hunter, or will true love triumph?

The twists and turns of the plot are predictable enough but it’s executed with enough professionalism to remain entertaining. There’s also plenty of characteristic 1930s Hollywood glamour. Miriam Hopkins and Fay Wray are both amusing and likeable. Joel McCrea plays Dorothy’s handsome suitor with breezy style. Between them the three leads have enough charm to carry this on enough without too much difficulty. The supporting cast is competent. There’s really not much to dislike here.

Director William A. Seiter and writer Norman Krasna both specialised in light comedy and they handle the material effortlessly. This is well-made escapist entertainment and if that’s what you’re after you can’t really go wrong with this movie. I saw this one on Australian TV, and unfortunately the print that was used wasn’t that great. It doesn’t seem to have been released on DVD.
Posted by dfordoom at 6:12 PM