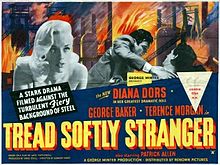 Tread Softly Stranger is a 1958 British crime thriller that seems to enjoy a fairly poor reputation. I have no idea why. It’s enormously entertaining. Yes, it is overheated and melodramatic verging on hysteria, but if like me you consider those qualities to be assets rather than liabilities you’ll enjoy this movie. Plus it has some very film noir qualities, and it has Diana Dors.

George Baker is Johnny Mansell, a gambler and man-about-town. Unfortunately he’s been on a major losing streak and he owes rather a lot of money and the people he owes it to are the sorts of people who tend to get rough when they’re owed money. Johnny decides it’s time to get out of London for a while. 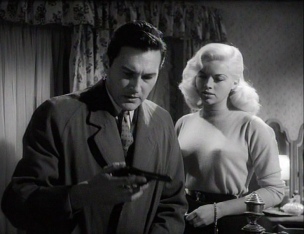 He heads back to his home town, a grimy northern industrial city. It’s a depressing place but Johnny knows his way around there and he also has a brother there. Dave Mansell is not like his brother. He’s a hardworking sober sort of guy. Johnny has heard of work but doesn’t think he’d like it and he’s never been desperate enough to try it.

Dave has his own problems though. Well one problem really, his girlfriend Calico (Diana Dors). It’s not that Calico isn’t fun to be around. She’s lots of fun. And she’s gorgeous. But Calico likes pretty things. Pretty things that tend to expensive. Jewellery. Nice dresses. And she likes going out to clubs and restaurants. Keeping Calico in the style to which she’s accustomed isn’t easy when you earn 12 pounds a week as a book-keeper for a large steelworks. 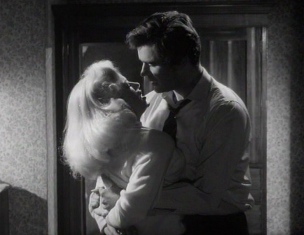 Dave has found a solution to this difficulty. He’s been helping himself to the firm’s money. That’s a solution that turns out to be not quite such a clever idea when he discovers the auditors will be checking the books in a week’s time. And the books are not exactly in the sort of state you might wish them to be when the auditors call. Johnny likes his brother and offers to help him out. Johnny has a surefire answer to this ticklish problem. There’s a horse running on the weekend and it simply can’t lose.

Calico and Dave have come up with an alternative solution which is for Dave to rob the factory and steal the payroll. Johnny will need to come through with the money from the horse race in time to stop Dave from putting his hare-brained scheme into practice. The two brothers face another awkward problem. Calico and Johnny have fallen in love. Dave is a nice guy and all that but he’s a little on the dull side for a girl like Calico. Good-looking raffish gamblers are more her speed. 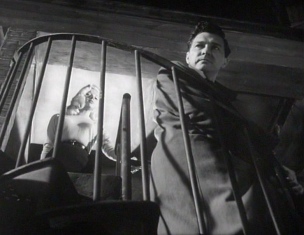 The plot is certainly very clichéd but film noir doesn’t require highly original or even plausible plotting. If a film noir has enough style that can be more than enough. And Tread Softly Stranger has plenty of style. It was photographed by Douglas Slocombe, a superb cinematographer. Everything in this movie is grimy, bleak and harsh. There’s not a ray of sunshine to be seen. Everything is old and rundown. It’s a perfect noir cityscape.

The acting is equally entertaining. I’ve always admired George Baker and he’s a fine noir hero, a likeable loser who drifts aimlessly through life enjoying himself but is not quite as clever as he thinks he is. Terence Morgan is extremely good as Dave, a man who is very different from Johnny but in his own way just as weak and just as likely to find himself shipwrecked by life. 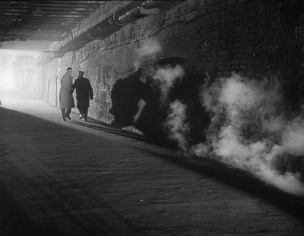 And then there’s Diana Dors, surely one of the most underrated actresses in British film history. She’s a magnificent femme fatale. Calico isn’t evil. She’s actually not a bad person at all. But like Johnny she’s addicted to a lifestyle that is glamorous and expensive and she is determined to have that lifestyle no matter what the consequences. She destroys men no out of malice but because she can’t help herself. All three central characters are good-natured but fatally weak-willed. Dors gives a superb performance and she absolutely sizzles with sex. Calico gets the movie’s best lines. “I come from the slum, where it’s quite a step up, even to the pavement.” And “I discovered that my legs weren’t made just to stand on.”

Perhaps not a classic in a conventional sense but a thoroughly enjoyable movie with a nice mix of darkness with a dash of camp. The all-region DVD from Odeon’s Best of British range is highly recommended. A lovely transfer that does full justice to Slocombe’s cinematography.
Posted by dfordoom at 1:47 PM