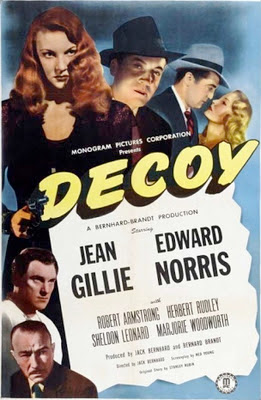 Decoy is an outrageous film noir potboiler that truly has to be seen to be believed.

It has the basic noir trademarks - the flashback, the femme fatale, the basically decent hero led astray by the aforementioned femme fatale, the atmosphere of seediness and despair. What it does with those ingredients is something else, something that explodes the boundaries of the genre. The result is not a great movie, not even a particularly good movie by conventional standards, but certainly a memorable one.

Margot Shelby (Jean Gillie) has a problem. Her boyfriend is bank robber Frank Olins. He has $400,000 from his last robbery stashed away somewhere but he won’t tell anyone where. And he’s on Death Row after killing a bank guard. He wanted the money so they could have a life together but if he’s going to die he doesn’t want to take the chance that someone else will get his money and his girl. So he’s decided the whereabouts of the loot will die with him. Margot and her other boyfriend, Jim Vincent, need to come up with a plan. The traditional solution would be to try to break him out of prison but they have a much better scheme than that. They’ve discovered there’s a drug called Methylene Blue that is an antidote to cyanide poisoning. And cyanide is the gas used in executions in the state of California. All they need to do is to get hold of Frank’s body after the execution, administer the antidote and then fool the revived bank robber into telling them where the money is.

To do this they’ll need the assistance of the prison doctor, Dr Lloyd Craig. That shouldn’t be a problem. He’s a man, and Margot can get any man dancing to her tune. So the plan seems fool-proof. Trouble is, Frank is a very suspicious guy so all he’ll agree to do is to draw her a map, and then give her half the map while keeping the other half himself. Frank is right to be suspicious but he has no idea just how ruthless Margot is. She’s not into the concept of sharing. Not at all. And if people get in her way she kills them. OK, so the first thing you’re probably thinking is, hang on, an antidote to cyanide poisoning is all very well but if the guy has been executed then he’s dead. This has got to be a real heavy-duty antidote if it works on dead people. This would be a flaw in most films but this one solves the problem by simply ignoring it. Everyone in the movie simply takes it for granted that reviving dead people is no big deal. It’s a breath-taking piece of effrontery but somehow this movie gets away with it.

The outrageousness of this movie doesn’t stop there. By the standards of Hollywood in 1946 this is a seriously violent, seriously sleazy film. How they managed to get so much casual violence past the Production Code Authority remains a mystery. An even bigger mystery is how they managed to get away with one particular scene, one of the most vicious and sadistic slayings you’ll see in any movie. Margot is not just a femme fatale. She is the ultimate femme fatale. She has no redeeming qualities whatsoever. Jean Gillie’s performance is extraordinary in its intensity. It’s not great acting but you certainly won’t forget it in a hurry.

Mind you, none of the characters have any redeeming qualities. Even the doctor isn’t really troubled by his conscience until he figures out he’s been double-crossed. The tone of this movie is unremittingly cynical. For a Monogram production it’s reasonably professional. It doesn’t have the technical sloppiness you often associate with Poverty Row productions. It looks cheap but not excessively so and the cheapness adds effectively to the dinginess and atmosphere of moral squalor.

There’s a delightfully hysterical tone to this sordid tale. It’s a bizarre viewing experience but one not to be missed. The Warner Home Video DVD looks sensational and includes a very very brief documentary on the film plus a moderately informative commentary track.
Posted by dfordoom at 10:52 AM