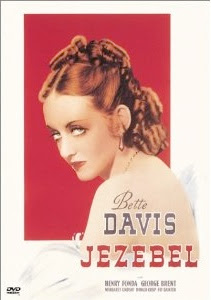 The popular legend regarding Jezebel is that Bette Davis got the part as a consolation prize for missing out on the role of Scarlett O’Hara in Gone With the Wind. As a result it’s usually dismissed as a poor man’s Gone With the Wind.

In fact Jezebel was released first, but that was because the production of Gone With the Wind dragged on for so long. Warner Brothers therefore managed to bear Selznick to the punch with their own southern epic. Jezebel earned Bette Davis her second Oscar, and was the beginning of a fruitful collaboration between the star and director William Wyler. So even if the popular legend is true the movie ended up being a major step forward in Davis’s career.

The superficial similarities between the two stories are best ignored. Although they both feature a strong-willed southern belle Jezebel is quite capable of standing on its own merits. Davis is Julie Marsden, and to describe her as strong-willed would be woefully inadequate. She’s determined to have her own way, not only at the risk of destroying others but even at the risk of destroying herself. She simply can never back down. She is going to be married to be married to handsome young banker Preston “Pres” Dillard (Henry Fonda) but she is not satisfied that she has him sufficiently broken to the saddle yet. She intends to make sure the job is done properly before the marriage takes place. Early in the movie we see her dealing with a badly behaved colt and it’s clear that as far as Julie is concerned the only difference between training a horse and training a man is that men take just a little longer.

Unfortunately she makes one disastrous miscalculation in training Pres. She loses him, and losing something that she wants is something that has never happened to her. She doesn’t like it. She intends to do something about it. The price will be terrible, but that doesn’t make her hesitate for a moment. Her instrument will be a former beau of hers, Buck Cantrell (George Brent). The drama will be played out against the background of the disastrous yellow fever outbreak in New Orleans in 1853. The problem with most of the writing on this movie is that it obsesses over Davis’s character and her performance and on trying to give a feminist interpretation of the movie’s treatment of Julie. While Julie is certainly central to the film this blinds many people to the possibility that there may be more going on in this film. In fact in some ways this is an even more interesting examination of the culture of the Old South than Gone With the Wind.

The real theme of the movie is the reckless violence that is the inevitable by-product of the southern obsession with honour, and the stiff-necked and unthinking pride that motivates this obsession. The men slaughter each other in duels with no more thought than they would put into the question of whether to go to the theatre tonight or not. It’s surprising this theme has been overlooked, because it’s actually stated quite explicitly several times, especially just before the duel that will have such devastating repercussions. Julie’s mother remarks that it’s easy for southern women to start the southern men quarreling but it’s impossible to stop them. Julie also makes some bitingly ironic remarks about the realities of southern chivalry, and about the southern determination to cling to their customs.

In this movie we see that this fatal pride is not confined to the men. Julie displays the same insanely exaggerated pride, the same unwillingness to back down, the same terrifying recklessness. It’s this proud self-destructiveness that is the cause of every disaster in the story, even including the yellow fever epidemic (since the city authorities have been repeatedly warned of the vital necessity of draining the swamps near the city but have contemptuously rejected the warnings). And of course lurking in the background is the coming war, and again at several points in the film we see the stubborn refusal on the part of southerners to accept the possibility that a war might end with their own defeat. Just as Julie refuses to accept the idea of defeat. Which is not to say that the movie is unsympathetic to its characters. Their excessive pride is intimately bound up with a deep and abiding love for the land that has nourished them. Julie tries to explain this to Pres after he returns from a period in the North filled with scorn for the ideals and the culture of his own land. There’s a tragic inevitability to events, as people do things that will lead them to disaster because they are simply unable to imagine any other way of behaving.

For Julie the crucial event is her humiliation at the ball, a humiliation which is entirely self-inflicted. This ballroom scene is Wyler’s masterstroke. Bette Davis of course was always inclined to take her performances to emotional extremes but Wyler keeps this tendency in check so that when the moments of emotional overload come they are all the more effective. George Brent is the surprise packet in this movie - he’s very very good indeed. As for Henry Fonda, while I’m always of the opinion that any movie could only be improved by replacing him with another actor, any other actor, in this movie he is at least adequate.

While it’s true that it lacks the scope of Gone With the Wind, and while it’s equally true that Julie is a less complex character than Scarlett O’Hara it’s also true that if you can such comparisons aside there is much to ponder and much to enjoy in Jezebel.
Posted by dfordoom at 1:05 PM