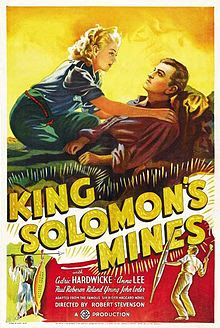 H. Rider Haggard’s wonderful Victorian tales of adventure have been adapted often for film, but the adaptations have been invariably fairly loose. The 1937 British movie version of King Solomon's Mines by Gaumont British Pictures is no exception.

The movie introduces us to two characters who don’t appear in the book, a feckless Irishman named Patrick O’Brien and his beautiful and very feisty daughter. They have been drawn to South Africa in the 1880s by the lure of the diamond fields, but their quest for easy riches has been conspicuously unsuccessful. The daughter, Kathy (played by Anna Lee), has decided on a desperate expedient - she intends to head for the coast in search of honest work. In order to get there they manage to prevail upon the famous big-game hunter Allan Quatermain (Cedric Hardwicke) to give them a lift in his wagon. Quatermain is engaged to take two Englishmen up-country. They are the young and handsome Sir Henry Curtis (John Loder) and a retired naval officer, Commander John Good (Roland Young). Destiny now steps in. They encounter another wagon, and two strangers who will have a fateful influence on all their lives - an insane English explorer and his African companion, Umbopa (Paul Robeson). The explorer dies almost immediately, but he has a map with him, a map that falls into the possession of Patrick O’Brien. The map is the key to the fables mines of King Solomon and their fabulous riches in diamonds. O’Brien sets off into the desert alone, heading towards King Solomon’s Mountains. The lure of King Solomon's Mines is too strong for him to resist.

Kathy now announces her intention to set off in pursuit of her father. The hard-headed and rather gruff Quatermain assures her it’s madness and informs her he wants no part of it. Sir Henry and Commander Good are however both suckers for an attractive young woman in distress. They agree to accompany her. Quatermain still thinks it’s insanity but despite his gruffness he’s an honourable man. He agrees to go along as well. Their guide is the mysterious Umbopa. Whoever he is he’s no servant. He carries himself as if he were royalty. Our travellers will discover that there is a reason for this. They will find King Solomon's Mines, and rather more adventure than they bargained for as they are caught up in a power struggle in a remote African kingdom.

There’s some great location photography in this film, along with other scenes that are clearly shot in a studio. While it has little in common with Haggard’s novel it’s undeniably strong on adventure. Paul Robeson gets top billing, surely the first time a black actor achieved this in a major studio production. He displays a distressing tendency to sing at the slightest provocation but that was expected of any movie in which he appeared. As an actor he’s reasonably good. Sir Cedric Hardwicke is too stuffy to make a convincing Allan Quatermain. Roland Young provides comic relief, and he actually is quite amusing. John Loder is an adequate if not terribly exciting romantic hero. Anna Lee effortlessly steals the picture as Kathy.

The Region 4 DVD release is barebones but quite acceptable as far as picture quality is concerned. So far I don’t think there’s been a truly great adaptation of a Rider Haggard novel. This one is OK. Worth a look if you can pick up it up cheaply enough.
Posted by dfordoom at 4:51 PM