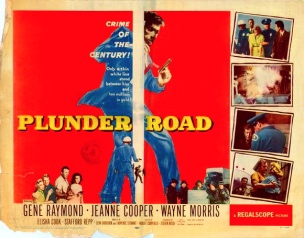 Plunder Road was made by Regal Films in 1957 and released by 20th Century-Fox. It has few genuine claims to being a film noir but it’s an exciting and entertaining heist movie.

The focus is entirely on the heist and the getaway. We see everything from the point of view of the gang, our only clues to the course of the police investigations coming when the bandits encounter a road-block or pick up snippets of information from a police scanner.

The heist itself is a train robbery, in fact the most ambitious train robbery ever, the plan being to lift ten million dollars’ worth of gold bullion on the way to the San Francisco Depository from the US Mint. The plan is intricate, requiring split second timing, and dangerous, involving the use of nitro-glycerine which must somehow be kept from exploding prematurely while being transported in a truck over rough roads in torrential rain. The explosives expert of the gang, Skeets Jonas (Elisha Cook Jr), has devised a complex piece of apparatus to prevent the bandits from being blown sky-high before the robbery.

The plan also involves the use of a crane truck, and gas to incapacitate the guards. The robbery goes off like clockwork but now comes the difficult part. The gang has to transport the stolen gold 900 miles. This will involve the use of multiple trucks which are changed several times.

One interesting feature of the movie is that we learn very little about the five members of the gang. We know that this is the first job ever pulled off by the gang’s leader, Eddie (Gene Raymond). We learn that Skeets has been in and out of prison all his life, and that one of the other gang members had been a race car driver. But we know very little about what makes these men tick.

That could have been a weakness, but it isn’t. By avoiding complex and lengthy backstories the movie focuses on the action, and on the tensions of the cross-country chase. We might not know the details of these men’s lives but we do see how they react to stress. Some react well, others less well. We also see how the interactions between the gang members emphasise their strengths and weaknesses.

Director Hubert Cornfield had a brief and undistinguished career but he handles this movie like a pro. Steven Ritch, who plays the ex-race car driver Frankie, wrote the very tight and effective screenplay.

While it’s only marginally noir it’s worth pointing out that the robbery scenes which take place at night and in driving rain do have a definite noir feel.

The movie’s great strength is its very tight focus. It hits the ground running and the action and the tension don’t let up at any stage during its 72-minute running time. The extended heist sequence is one of the best of its kind with plenty of action and with at least some of the gadgetry that would later become a standard feature of heist movies.

This is one of those “perfect crime” movies, and while the crime is certainly well planned and executed the prisons are full of guys who thought they had devised similarly perfect crimes. Even the best plans are vulnerable to human error and to plain dumb bad luck.

The acting is generally good with (not surprisingly) Elisha Cook Jr giving the standout performance.

The DVD is exactly what you expect from Olive Films - it’s barebones but the 16x9 enhance transfer (the movie was shot in the Cinemascope aspect ratio) is superb.

Plunder Road is a thoroughly enjoyable action suspense crime thriller with a few hints of noir. An obscure movie than can nevertheless be highly recommended.
Posted by dfordoom at 9:05 PM