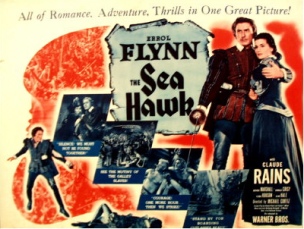 The Sea Hawk is deservedly one of Errol Flynn’s most famous swashbucklers. Made by Warner Brothers in 1940 it should be noted that it is not a remake of the 1924 silent film of the same name, although both deal with pirates and the 1924 movie is a classic swashbuckler in its own right. But it’s the much better-known 1940 version we’re concerned with.

Flynn was already a huge star and putting him in another pirate adventure movie was always going to be a smart move. And getting Michael Curtiz on board, Curtiz having  directed Flynn in his 1935 smash hit Captain Blood and in several other action adventure films, was another shrewd move. Curtiz certainly knew how to do this kind of movie supremely well.

This movie hits the ground running and the pace never slackens. It opens with a superb extended sea fight in which a Spanish galleass is caught and boarded by the English ship The Albatross. All we know about Geoffrey Thorpe (Errol Flynn) at this stage is that he is obviously the captain of The Albatross. And this extended action sequence tells us all we need to know about him without the necessity for any tedious introductory scenes. Thorpe is clearly a brilliant seaman and a born leader, he has the unquestioned respect of his crew, and while he can be ruthless he can be chivalrous as well. And when he encounters the beautiful Spanish lady Doña Maria (Brenda Marshall), who had been travelling to England on the galleass   Thorpe has just captured, we learn that while Thorpe is fearless in the face of danger he is somewhat helpless when faced by a pretty woman. 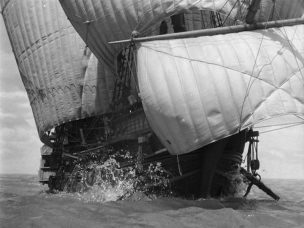 This opening sequence also introduces us to Don José Alvarez de Cordoba (Claude Rains), the newly appointed Spanish ambassador to England, who is also now an unwilling passenger on board The Albatross. But Doña Maria and Don José are certainly not prisoners. Thorpe might be a pirate but he’s a gentleman and he intends to convey his Spanish guests safely to England, which is where they were headed anyway.

Technically Thorpe is not actually a pirate. He is a privateer, a privateer being a private citizen licensed by his government to prey on the shipping of that government’s enemies. Although given that England and Spain are not actually at war, not yet anyway, the legal status of the English privateers who plundered Spanish shipping in the late 16th century was somewhat ambiguous. Queen Elizabeth is aware that this is a dangerous game she is playing but she needs the considerable income she derives from the privateers to augment her rather inadequate treasury. 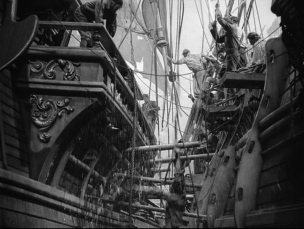 This dangerous game is about to become more dangerous still when the queen, unofficially, authorises Thorpe to conduct a daring raid on a Spanish treasure shipment crossing the isthmus of Panama. This raid will have fateful consequences for Captain Thorpe and his men but will also indirectly put Thorpe in a position to render his Queen his most valuable service yet.

There is enough action in this movie to satisfy anyone but there is also a good deal of intrigue, with nefarious Spanish plots and treason and intricate power struggles within Elizabeth’s court between pro- and anti-Spanish factions. There is also of course a romantic sub-plot, with a love affair between Thorpe and Doña Maria.

This romance is the movie’s one weak link, with Brenda Marshall as Doña Maria being rather too bland to be a completely convincing object of the affections of a sea hawk like
Geoffrey Thorpe. 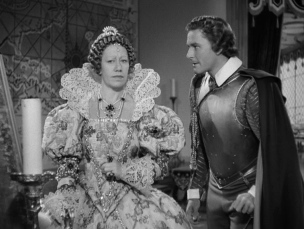 Having said that, Curtiz manages to integrate the romance and the political machinations into the main action plot with considerable skill, and without the pacing of the movie ever threatening to drag. Curtiz really keeps things moving along.

Flynn was at the height of his powers and he’s a superb action hero. Thorpe is a man who leads men through sheer charisma and if there’s one quality Flynn possessed in abundance it was charisma. Flynn radiates vitality. Even when he isn’t doing anything he always seems like he’s just about to spring into action.

Flora Robson’s performance as Queen Elizabeth is one of the more interesting features of this movie. This is a very different interpretation compared to the way other actresses have approached this role. This is a softer, more feminine Elizabeth, at times playful, often coquettish, often humorous. And at times perhaps a little uncertain. England was in a very dangerous situation in the 1580s and on occasion she seems just a little unsure how far she can push her luck. But Robson still convinces us that this is a monarch capable of ruling when necessary, and capable of demanding, and getting, obedience. She simply prefers to lead by persuasion rather than force. Whether it’s a historically accurate performance or not is a moot question but it’s certainly a refreshingly different performance. 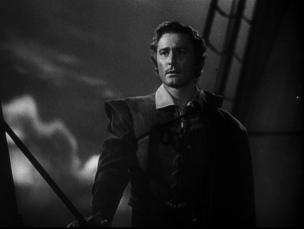 Claude Rains was a fine actor but inclined to overact if not kept on a short leash. And Curtiz seems to have realised this, getting a very effective performance from him by restraining the actor’s tendency to overdo things. I’m inclined to give Curtiz the credit for this since he got a similarly restrained, and equally effective, performance from Rains a couple of years later in Casablanca. The supporting cast is excellent with Alan Hale being particularly good (and also more restrained than usual) as Thorpe’s faithful first mate.

Michael Curtiz is often seen as the antithesis of the auteur film-maker, a director who was exceptionally competent but without having any real personal style. Which is more or less true. Curtiz tended to allow the subject matter to dictate the style of his movies rather than trying to impose a personal style. One thing that is not in doubt though is that he was a remarkably effective director. Watching a movie like The Sea Hawk it’s obvious that Curtiz was no mere hack. The movie has too much energy, too much vitality, too much sparkle, to be the work of a hack. The action scenes in particular are magnificent. There’s also one very ambitious shot looking down onto the deck of Thorpe’s ship, just to prove that Curtiz was quite capable of inspiration when needed. The significant thing about this shot is that it serves a purpose, it’s not just done to show us what a clever chap the director is. The use of tinting in the Panama scenes is an unusual feature for a 1940 movie but it works quite well.

The Sea Hawk is sheer unadulterated fun from start to finish, a dazzling example of how to an action adventure movie the right way. Very highly recommended.
Posted by dfordoom at 2:45 AM