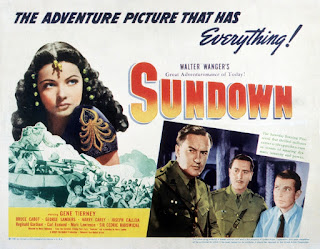 Sundown gave Gene Tierney one of her early starring rôles and it’s an interesting mix of wartime intrigue and adventure which would have worked quite well but for a fatal flaw.

The film is set in Manieka, a minor outpost in Kenya. Although Britain is at war the British officials there are pretty casual. Things are usually quiet and peaceful and no-one worries very much about security. That all changes when Major Coombes (George Sanders) arrives to take over command. Coombes is shocked by the laxness of discipline. An Italian prisoner-of-war is allowed to wander about all over the place. Sentries are rarely posted. Coombes is determined to smarten things up. In Nairobi  the war is taken much more seriously and Coombes has been sent to investigate some very disturbing news that the Shenzi, who are described as outlaw natives, are being armed.

The Italian prisoner-of-war then outlines his crazy theory of how Africa is the key to world domination and Coombes thinks it’s a very persuasive theory.

What really unsettles things is the arrival of Zia (Gene Tierney). Zia is half-Arab and half-French, stunningly gorgeous, and is an immensely wealthy trader. 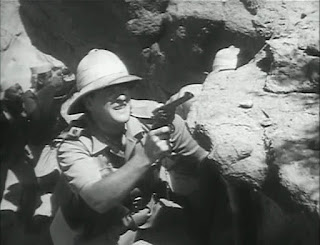 Trouble starts to build and everyone starts to get nervous, especially when the natives start confidently predicting that one of the Europeans has an appointment with death. There are in fact evil conspiracies afoot. These are dark days for the British Empire! But that means opportunities for heroic deeds.

There is tension between the District Officer, Crawford (Bruce Cabot), who is the civil commander and Coombes as military commander. Crawford is, quite honestly, a pompous bore and an extremely irritating character. Coombes is pompous as well but George Sanders can make such a character reasonably entertaining. Bruce Cabot, sadly, does not have that ability.

Hollywood in those days was obsessed by the idea of beautiful mixed-race women. The idea of a woman trapped between two worlds is of course inherently rather interesting. Zia is even more interesting. She is half-Arab but also considers herself to be African. 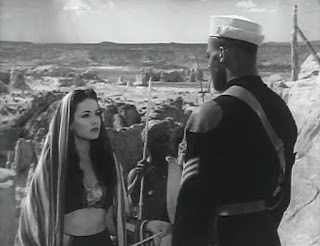 Gene Tierney in 1941 really was incredibly lovely. This is hardly a demanding rôle but she handles it reasonably well.

Of course being a Hollywood movie made before America’s entry into the war this film is outrageous pro-British propaganda. From the first mention of illicit guns you just know that one of the characters is going to turn out to be an Evil Nazi. In this case his identity is painfully obvious right from the start.

The whole setup of this film lends itself to preaching. And Hollywood never could resist the temptation to get preachy. This movie takes the opportunity to preach to us on both political and social issues. And it does so mercilessly. 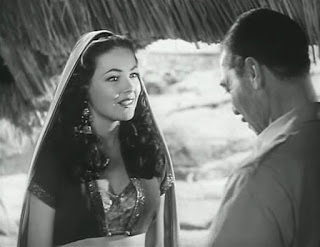 On the plus side there are a couple of surprisingly imaginative and visually interesting action sequences. In fact the movie as a whole is fairly impressive visually. Charles Lang’s black-and-white cinematography is extremely good.

Apart from the times that the plot comers to a stop for a sermon it has to be said that director Henry Hathaway handles things pretty well.

Gene Tierney doesn’t really appear until the movie is well under way but we have already seen her briefly in an introductory scene when she arrives in an aircraft. At this stage we have absolutely no idea who she is or what part she is going to play in the events of the movie and this is quite an effective technique - it establishes her rather nicely as a mysterious figure. Unfortunately once she reappears in the film the mystery is not really maintained. She turns out to be disappointingly straightforward. 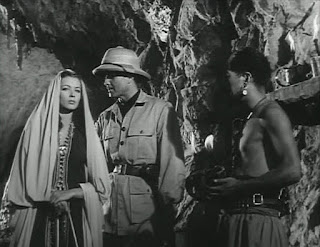 Tierney was at this time probably the most beautiful star in Hollywood. In this film she’s cast as an exotic beauty and she’s put in costumes that make her look like a princess from the Arabian Nights. The obvious thing would have been to pair her with a handsome charismatic leading man. Instead she’s paired with a non-star with zero personality.

Sundown has fallen into the public domain. The copy I watched came from a St Clair Vision bargain bin boxed set. Surprisingly the transfer was reasonably good.

Sundown had the makings of a decent adventure romance movie but it’s swamped by some of the most embarrassingly ham-fisted cinematic propaganda you’ll ever encounter, and by  the endless sermonising. It’s a great pity because Sundown is visually exceptionally interesting and Hathaway’s direction of the action scenes is lively. And Gene Tierney looks great.

A movie that had promise but while it has its moments it’s difficult to recommend this one unless you’re a Gene Tierney completist.
Posted by dfordoom at 11:16 AM