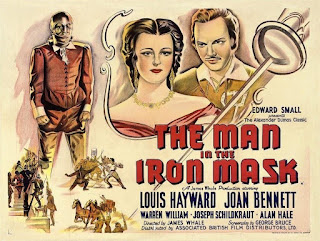 The Man in the Iron Mask was based, very loosely, on the final instalment of Alexander Dumas’ tales of the Three Musketeers. It was directed by James Whale.

The film opens with a happy event. The Queen of France has given birth to a son, the future Louis XIV. King Louis XIII is overjoyed to have an heir. There is one slight problem. The Queen has actually given birth to two sons, and that’s too much of a happy event. It seems obvious that twins are likely to cause problems, possibly even civil war if they were to be pitted against each other by rival factions. The sensible thing is to quietly get rid of the second child. Obviously there can be no question of harming the child - he must simply be sent away so that he can do no mischief. For this plan to work the child will have to be given to someone who can be trusted absolutely not only to care for the boy but to keep the secret. And who could be more trustworthy than the king’s old comrade-in-arms D’Artagnan? D’Artagnan is sent back to his home in Gascony where he will raise the lad, who will be given the name Philippe. 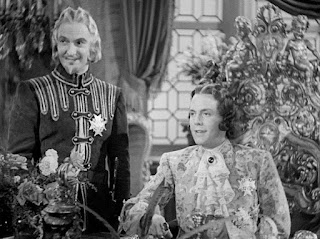 Unfortunately the secret was not kept well enough in the beginning. A particularly slimy courtier named Fouquet discovered the secret and has used his knowledge to amass a great deal of both power and wealth.

It is now 1658. The 22-year-old Louis XIV is about to be betrothed to the Spanish Infanta, Maria Theresa. Louis has a more urgent problem on his mind. He has become aware of a plot to assassinate him when he visits the cathedral to light a candle on his late father’s name-day. It’s a tradition and he cannot escape performing this duty but it may cost him his life. At this moment one of Fouquet’s little plots will have unexpected results. He has caused D’Artagnan and the Musketeers and Philippe to be arrested as traitors. The King (who knows nothing of the existence of his twin) is struck by the uncanny resemblance between himself and Philippe and he has a clever idea. Philippe can impersonate him at the cathedral, and get himself assassinated in the king’s place. In fact the assassination is avoided but the ability of Philippe to impersonate the king, and the potential usefulness of this fact, has been noted by the king and by others. 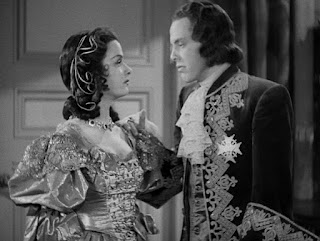 The impersonation is good enough to fool Maria Theresa who is thrown into extreme confusion when the king’s personality seems to be different every time she sees him.

Everyone in this movie is plotting. Some are plotting to ensure their own survival, some are doing so for the good of the country, and some in order to enhance their own power. King Louis plots for the sheer pleasure of indulging in intrigues and playing games with other people’s lives.

One result of all these intrigues is that the king has Philippe imprisoned, with an iron mask locked onto his face. The king has the only key. Now D’Artagnan and his friends, including Louis’s one trustworthy courtier, Colbert, must plot in order to free Philippe. 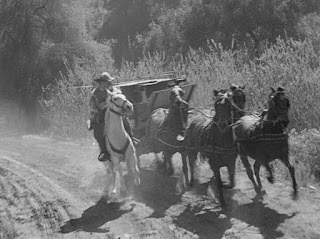 There’s enough action to satisfy fans of swashbuckling adventure but it’s the acting performances that make this film notable. Louis Hayward plays both twins, Louis XIV and Philippe. Louis (according to the movie) is a vicious, spoilt, self-indulgent, degenerate sadist. Philippe is a young man of both courage and honour. Hayward plays both rôles to perfection.

Warren William might seem an odd choice to play D’Artagnan but it must be remembered that this is not the dashing headstrong young D’Artagnan of the Three Musketeers. D’Artagnan, and his musketeer comrades, are now well into middle age. Their courage and loyalty are undimmed but the years are catching up to them. The casting of Warren William actually works quite well. 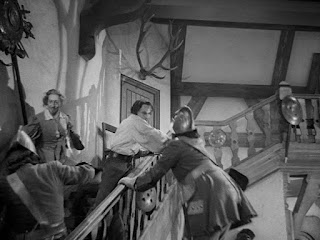 Mention must be made of Joseph Schildkraut’s unbelievably oily portrayal of Fouquet. It’s a stunningly exercise in perversity and evil. Joan Bennett does well portraying the confusion and mental torture of poor Maria Theresa.

James Whale disliked making this movie and he disliked the actors and he departed from the production before the completion of filming. He seems to have done the movie for the money without taking any genuine interest in proceedings. The Man in the Iron Mask  was made on a substantial budget for its era and it looks quite impressive.

The Man in the Iron Mask  is worth seeing for some bravura acting and especially for Louis Hayward’s extraordinary performances. Overall it’s entertaining and it’s recommended.
Posted by dfordoom at 6:19 PM