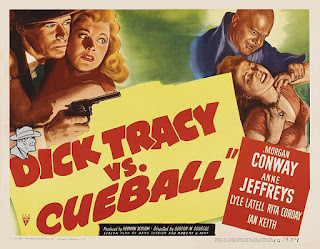 Dick Tracy vs Cueball was released in 1946. It was the second of the RKO Dick Tracy feature films, following Dick Tracy, Detective. Morgan Conway returned as Dick Tracy. After this film he was replaced by Ralph Byrd who had played the rôle in the four Republic serials.

The formula for these Dick Tracy movies was intriguing - take your standard crime B-movie, add lots of film noir visual style, add a touch of gothic atmosphere, a dash of horror movie imagery and then sprinkle some comic-book weirdness on top. It makes for a delicious concoction. 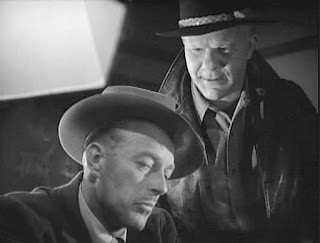 In this instalment Harry Lake, a vicious thug nicknamed Cueball for his total baldness, has just been released from prison and now he’s involved in a plan to steal a fortune in diamonds. Cueball gets the idea that he’s being double-crossed by his partners, and he’s right. Cueball’s normal response to anyone who gets in his way is to kill them (by strangling them with his hatband!) and he starts to deal with his erstwhile partners in his accustomed manner. The opening dockside sequence is very noir and its result is the first of a series of corpses. This brings ace Homicide cop Dick Tracy into the case.

The trail initially leads Tracy to a low dive known as the Dripping Dagger where he hopes to get some information from Filthy Flora. There’s also a crooked diamond dealer, Percival Priceless, who is almost certainly mixed up in the conspiracy. 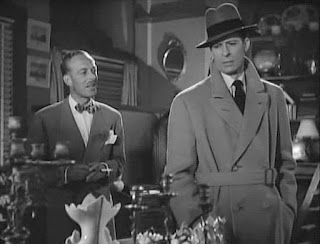 We pretty much know everything that’s going on from the start but the fun part is whether Dick Tracy will track down the bad guys before Cueball kills them all. Tracy’s girlfriend Tess Trueheart helps out on this case, going undercover as a rich woman in the market for very expensive diamonds, and of course this means that she’s in imminent danger of getting rubbed out by Cueball.

Morgan Conway looks wrong for Dick Tracy but his performance feels right. Anne Jeffreys plays Tess, as she did in the first film. This film adds a new comic relief character, Vitamin Flintheart (played by Ian Keith channelling his inner John Barrymore). He acts as a kind of unofficial advisor and takes a more direct part in the investigation on occasion. He’s a genuinely amusing character. The standout performance is by Dick Wessel as the truly chilling Cueball, a guy who gets more homicidal the more bewildered he gets, and he gets very bewildered. 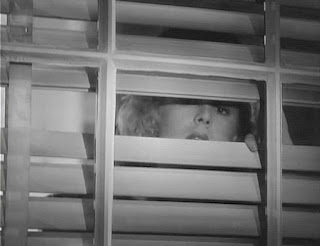 These first two movies do manage to convey at least some of the necessary comic-strip feel, with larger-than-life slightly bizarre villains and some odd and slightly grotesque minor characters. The Dick Tracy films have a unique flavour of their own and it’s a flavour that I find pretty appealing. There really isn’t anything quite like them in the world of 1940s Hollywood B-pictures. 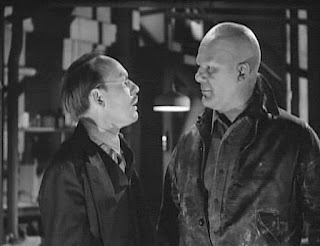 My copy of this movie comes from a Mill Creek public domain DVD set but the image quality is quite good. Sound quality is acceptable although with some occasional very mild crackling.

In 1978 the Medved brothers included this movie in their list of The Fifty Worst Films of All Time. This is patently absurd (as are almost all worst films lists). It’s a competently made very enjoyable B-movie with a touch of appealing oddness. Dick Tracy, Detective, which I reviewed here, is definitely better but Dick Tracy vs Cueball is fun and it’s still highly recommended.
Posted by dfordoom at 3:14 PM