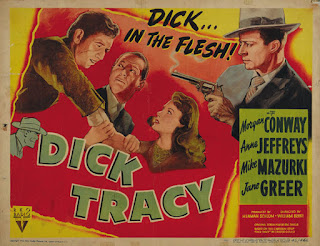 Chester Gould’s Dick Tracy comic strip was immensely popular back in the 1930s. It was inevitable that Hollywood would take an interest. Four serials were made by Republic with Ralph Byrd as Tracy and four feature films from RKO followed. Morgan Conway took over the rôle in the first two films and Ralph Byrd in the last two. The first of the RKO films was Dick Tracy, also known as Dick Tracy, Detective, was released in 1945.

I’m note sure why (given that I’m such a keen B-movie fan) but I approached this film with very low expectations. That turned out to be a mistake.

In the serials Dick Tracy is a G-Man but in the movies (as in the comic strip) he’s a cop, with the Homicide Squad. 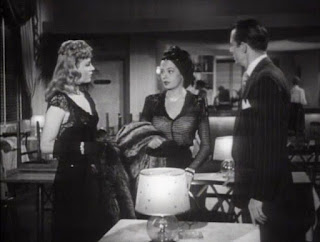 A brutal murder shocks the city. More murders follow. The motive appears to be extortion although Dick has his doubts about that. The extortion demands were written by someone signing himself Splitface. The victims were viciously slashed to death with a knife. Now the mayor has received an extortion demand as well. He’s not the bravest man in the world so he’s putting a lot of pressure on the police to solve this crime.

The trail leads Tracy to a creepy mortician named Deathridge, a night-club owner named Steve Owen and an astrologer and occultist named Professor Linwood J. Starling. They’re certainly involved, but it’s not clear how. Dick Tracy’s girlfriend got a look at the killer so they know how he got his name - he has a very large and very ugly scar on his face. 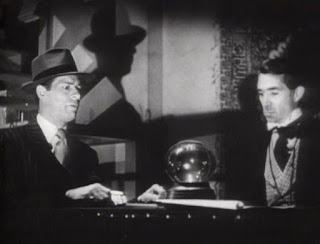 This is obviously a kind of serial killer movie, but not in the modern sense. There’s no question of any sexual motive. On the other hand it’s plain that the killer is one very crazy guy.

The trick with a movie like this is to retain enough of the comic-strip flavour that it doesn’t become just a generic crime B-movie but not so much that it becomes too silly or implausible. This movie manages that trick remarkably well. It’s generally realistic but it’s a kind of heightened or subtly warped realism. The villain is outrageously villainous but still just about believable. The plot is just slightly outlandish but again it doesn’t stretch credibility to breaking point. Dick Tracy is a square-jawed action hero but we can buy him as a hardboiled cop. This is not quite real life but it’s not quite out-and-out fantasy. The gadgets (like the famous wristwatch radio) have been dropped because they would have given it a slight science fiction feel and in a non-science fiction film they would have undermined believability too much. 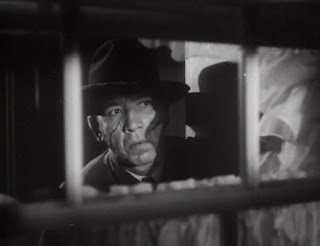 This is a surprisingly violent movie and the violence is quite brutal by 40s standards. And the violence isn’t comic-strip violence. Overall the movie has quite a dark edge. Visually it’s very film noir with just the faintest hint of gothic and perhaps even a touch of German Expressionism. Director William Berke doesn’t try to get too gimmicky but he uses both low-angle and high-angle shots on occasion to add to the sinister mood. This is a very well-made movie.

Morgan Conway doesn’t look quite right as Dick Tracy but his performance more than makes up for this. He captures the feel of the character perfectly. Anne Jeffreys is excellent as Tracy’s likeable but jealous girlfriend Tess Trueheart. Mickey Kuhn manages to be completely non-irritating as Junior. Even when he gets himself involved n the case we don’t mind since this is a comic-strip movie. Mike Mazurki is wonderfully sinister and Trevor Bardette is both fun and slightly bizarre as Professor Starling. Jane Greer is wasted as Owen’s daughter Judith, a sadly underwritten part. 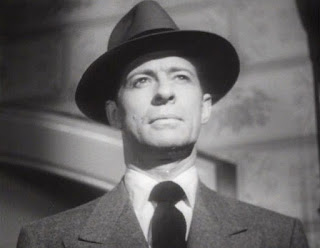 There’s no irritating comic relief character. There is some humour but it’s organic to the plot. And it’s effective.

If you’re expecting anything remotely resembling the comic-strip and comic-book movies and TV series of later eras you might be disappointed. There is not a trace of high camp. There is one brief hint of the paranormal but it can be explained away quite rationally. There are no gadgets. It’s basically the standard crime B-movie formula with a few key differences but those differences give it a unique flavour. It’s also insanely entertaining. Highly recommended.

Since I own a couple of the other RKO Dick Tracy movies you can expect further Dick Tracy reviews from me.
Posted by dfordoom at 4:40 PM