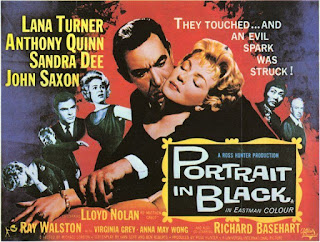 Portrait in Black is one of those gloriously overwrought melodramas produced by Ross Hunter for Universal in the 50s and 60s. Right from the start we know that this one is going to be even more overwrought than most.

Sheila Cabot (Lana Turner) is married to shipping tycoon Matthew Cabot (Lloyd Nolan). Matthew Cabot is a control freak, he is cruel and vindictive and he enjoys humiliating those in his power. Now he is suffering from a painful and incurable illness which makes his personality even more unpleasant. Dr David Rivera (Anthony Quinn) keeps his patient’s pain under control as best he can. Matthew Cabot’s is dying. But he is dying very slowly. Much too slowly for Sheila and Dr Rivera. They’ve been having an affair. There’s no way Matthew Cabot would ever agree to a divorce and if Sheila was foolish enough to ask him she’s be setting herself up for further emotional torture, plus Matthew would certainly ruin Dr Rivera’s career. They will just have to be patient and wait for her husband to die. 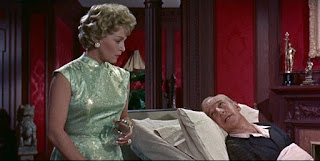 Or will they? Dr Rivera is a doctor. How hard would it be for him to hasten Matthew Cabot’s departure from this vale of tears? After all his death would not exactly come as a shock. It is very unlikely that anyone would be overly suspicious. And Dr Rivera is a very clever doctor.

The plan goes very smoothly and they seem to be home free until the first letter arrives. It’s not exactly a blackmail letter, but it makes it pretty obvious that somebody has discovered their neat little scheme. What are they going to do now? They might have done better to have tried to brazen it out in the hope that the anonymous correspondent would turn out to have no actual evidence but instead they decide to take a more pro-active line and by doing so they find themselves drawn into one foolish mistake after another.

The great thing about the screenplay (by Ivan Goff and Ben Roberts and based on their own play) is that it’s utterly predictable. We can see each disaster coming up a mile away. And Portrait in Black being the kind of overheated melodrama that it is that predictability is a major asset. It’s what makes melodrama fun - you know what’s going to happen next and you thoroughly enjoy the anticipation.

This is classic Ross Hunter material. The high melodrama plot. The deliciously overripe dialogue. The glossiness. The excess. There’s a splendid cast and every single one of the stars knows how to overact. Lana Turner of course is in her element. She was one of the truly great bad actresses. Anthony Quinn’s histrionics would be embarrassing in most movies but in this one they’re just perfect. Richard Basehart as Matthew Cabot’s business partner Howard Mason is a painfully obvious snake in the grass. Sandra Dee is charming as Sheila Cabot’s stepdaughter Cathy but she manages to overact as well. And John Saxon is her boyfriend, a man with quite a few grudges. 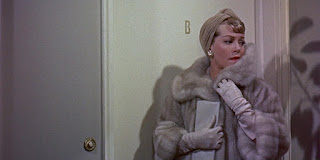 And of course it is all done in the Ross Hunter visual style - it’s in colour and it’s widescreen, it looks lavish, the sets and the costumes reflect a world of glamour, money, high fashion and style. Everything is glossy, everything looks expensive, everything is slightly overdone, but enjoyably overdone. There is nothing remotely gritty or realistic about the style of this movie. Visually it’s a kind of extreme anti-film noir. 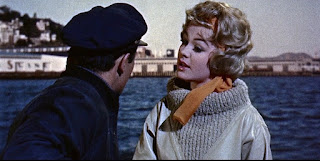 There’s a definite Hitchcock influence (pretty much inevitable in a mystery/suspense movie made in 1960) and even a few hints of Hitchcockian black comedy as carefully contrived schemes start to self-destruct. Of course it lacks the genuine suspense of a Hitchcock movie. It’s like someone trying to do a Hitchcock film without understanding anything of Hitchcock’s methods. Mind you, the two-car nightmare drive in the rain is a very entertaining very elaborate set-piece that works in its own way.

This movie was released on DVD by Universal Home Video a few years back as part of a two-movie two-disc set, paired with Madame X. Portrait in Black gets a pretty decent anamorphic transfer.