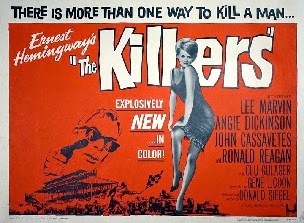 Don Siegel’s The Killers was ostensibly a remake of Robert Siodmak’s 1946 film noir classic of the same title. Both were based, very very loosely, on a 1927 Ernest Hemingway short story. Siegel’s movie in fact was originally released as Ernest Hemingway’s The Killers, much to Siegel’s disgust. He considered the title dishonest because the movie’s connection with Hemingway’s story is extremely tenuous. The Hemingway story is extremely short, dealing with two contract killers who are puzzled by their victim’s apparent willing acquiescence in his own death. While it’s an important theme in both movies, it’s the one element in the story that is retained. Both movies then add a detailed backstory which has no connection with Hemingway’s tale.

Siegel’s film was made in 1963 and was originally intended as a television movie. In fact it was one of the first modern made-for-TV movies. Ironically NBC decided it was too violent and Universal released it theatrically instead, in 1964.

The movie opens with two hitmen arriving at a school for the blind. Their target is one of the teachers, Johnny North (John Cassavetes). When they find him he offers no resistance whatsoever. This greatly upsets Charlie Strom (Lee Marvin), one of the hitmen. It becomes something of an obsession with him. He has to find out why a man would willingly choose death. In the course of obsessing over this problem Charlie recalls a rumour that Johnny North had been mixed up in a million dollar mail van heist. The money disappeared without trace after the robbery. Charlie is prone to philosophical musings on the nature of his job but he also has a keen interest in more pragmatic matters, such as the possible whereabouts of that missing million dollars. 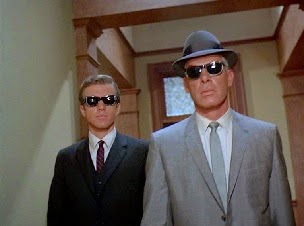 Charlie and his partner Lee (Clu Gulager) start digging around in Johnny North’s past and we now get Johnny’s story in the form of three lengthy flashbacks that occupy most of the movie’s running time.

Johnny had been a racing car driver, and a good one. That was before he met Sheila Farr (Angie Dickinson) and before his crash. These two disasters were inter-related. Sheila, as Johnny found out too late, was the girlfriend of wealthy gangster Jack Browning (Ronald Reagan).

The crash leaves Johnny with slight eye problems, but these are enough to have him banned from competitive driving. He pretty much hits the skids. Then Sheila makes him an offer he can’t refuse, although he would refuse it if he had any sense. All he has to do is the driving in a mail van robbery planned by Jack Browning. Browning is willing to use Johnny’s driving talents but their common interest in Sheila leads to a good deal of tension and sets the stage for the double-cross that you know has to come eventually. 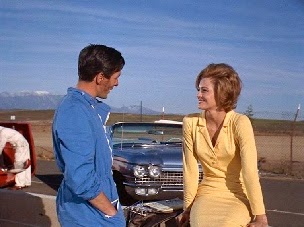 Charlie Strom will get the answer to his question but in this movie finding the answers is not necessarily a good thing.

The Killers was made on a very tight budget and most of the movie’s problems (and it has some serious problems) stem from this. There’s an excessive use of stock footage, the sets are limited and not always impressive and there’s a huge reliance on process shots. Most of the process shots are done reasonably well but some are quite poor. There’s one brief sequence where Johnny takes Sheila go-karting. It’s a sequence that really should have ended up on the cutting room floor - the process shots in that sequence are embarrassingly clumsy.

While the action of the movie takes place in various locations all the locations look the same because they’re all shot on the Universal backlot or on a sound stage. The lighting most of the time is the overly bright and overly flat lighting one associates with television. 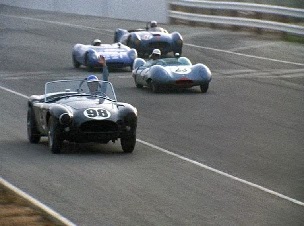 The other major problem is that John Cassavetes is hopelessly miscast, and he’s also clearly not interested in anything but his pay cheque. It’s a hopelessly unconvincing performance. To me Cassavetes always comes across as a stage actor who hasn’t really adapted to film. He’s over-intense when he needs to be subtle and his acting is often irritatingly mannered. Mostly though he’s just hopelessly miscast. 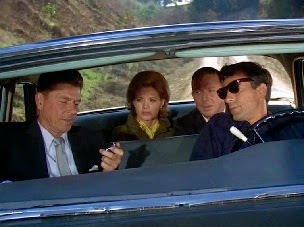 Ronald Reagan is the pick of the actors in this film. Jack Browning is a new style of 1960s gangster. He approaches crime strictly as a business. It’s about cash flow. He’s smooth but he’s tough. When he’s introduced to us he could be a successful lawyer or an accountant or a government official. It comes as a surprise that he’s a mobster. Reagan makes Browning menacing in a bland pin-striped suit sort of way. It’s a nicely judged performance and Browning is one of only two characters in this movie who really engage our interest.

The other character that we’re interested in is Charlie Strom. Lee Marvin is in tough guy mode, but he’s (mostly) a controlled sort of tough guy. He’s vicious but it’s a calculated viciousness. It’s almost as if he’s vicious because he’s a hitman so he’s supposed to be vicious. Marvin manages to make Charlie’s philosophical ponderings seem convincing rather than a gimmick. It’s easy to see that this movie and this performance had a considerable influence on Tarantino. Clu Gulager as Lee is amusing and occasionally disturbing but he’s a more obvious psychopath than Charlie. 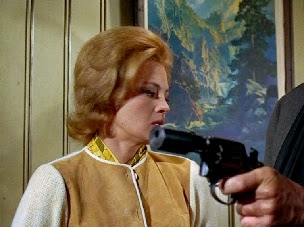 The Region 4 offers a very good transfer. The movie was shot in the Academy ratio for its intended television transmission. The DVD includes an odd commentary track by a film historian named Paul Harris. I’m still not sure whether this guy liked the movie or hated it.

Despite the serious budgetary constraints and the poor central performance by Cassavetes The Killers is an interesting movie from the point of view of film history. In content it’s very much film noir while in style it looks forward to neo-noirs like Point Blank. Given the fact that it’s a remake of a 1940s film noir classic it can almost be described as being itself more neo-noir than noir, with a characteristic neo-noir self-awareness. Even with its problems I still recommend this one.
Posted by dfordoom at 3:08 AM