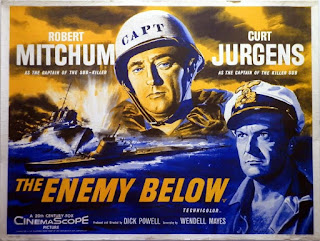 The Enemy Below is one of the classic submarine movies. It tells the story of a duel between an American destroyer and a German U-boat in the South Atlantic during World War 2. Dick Powell produced and directed the film which was based on a bestselling novel by Commander D. A. Rayner.

The U.S.S. Haynes has had an uneventful war and while it’s an efficient ship and morale is quite high the crew members are rather sceptical about their new skipper, Lieutenant Commander Murrell (Robert Mitchum). Murrell is not regular navy and his previous command was torpedoed and sunk by a U-boat. There’s some speculation that he may not know his business and that, even worse, he may have lost his nerve.

The ship’s uneventful war is about to become very eventful indeed. They pick up a radar contact and Murrell is convinced it’s a U-boat. The closest supporting Allied ships are a long way away so it’s destined to be a one-on-one duel between the Haynes and the submarine. As Murrell admits, on paper the odds are slightly in favour of the submarine. Nonetheless Murrell is determined to to accept the odds.

It soon becomes obvious that the crew needn’t have worried about their new captain. Murrell does know his business. Unfortunately the U-boat’s commander, Kapitan von Stolberg (Curd Jürgens), is equally competent.

What follows is a tense cat-and-mouse game, with the difference that this mouse has teeth that are every bit as sharp as the cat’s.

This is a movie that doesn’t waste too much time giving us the backstories of the characters. We learn just enough about Murrell to know that he has good cause to be very determined to win this duel, and we learn enough about von Stolberg to know that he is an old-school German officer who regards the Nazis with contempt. While the “good German” can be a bit of a cliché in this case it’s absolutely necessary. This particular story can only work if the audience has equal sympathy with both sides. In fact that’s the whole point of the story - war might be unpleasant but it is possible to wage it with courage and honour and, paradoxically, war can forge unexpected bonds between enemies. Both Murrell and von Stolberg are brave and skillful officers and as their duel progresses they develop a healthy respect for one another. The crews of both the American destroyer escort and the German U-boat are also courageous and highly professional. They’re all men trying to do their duty as best they can. Perhaps the most remarkable thing about this movie is that it is a 1957 war movie in which not a single character expresses genuine overt hatred for the enemy.

In order to succeed this movie also needed not just good actors as the two opposing captains but actors with a great deal of charisma. Mitchum and Jürgens were ideal choices, and as well as charisma they are able to bring genuine humanity to their performances. The supporting players are less important but Theodore Bikel as von Stolberg's second-in-command 'Heinie' Schwaffer and David Hedison (in those days still going by the name Al Hedison) as the Executive Officer of the Haynes both do well. Look out for an impossibly young Doug McClure as a junior officer on the Haynes.

Dick Powell demonstrates considerable skill and judgment as director. This is a movie that wastes very little time in getting to the action. And once the hunt is joined the suspense is maintained relentlessly. There’s also plenty of action. The action scenes are exceptionally well done.

The special effects are mostly impressive and the underwater sequences are convincing.

Not everyone will approve of the ending but I think that once you grasp the movie’s major theme it becomes obvious that it’s the right ending.

In 1966 The Enemy Below was remade (surprisingly well) as an episode of Star Trek, Balance of Terror. Even more surprisingly that episode preserves not just the basic structure of the story but the tone as well.

The Enemy Below has had a number of DVD releases including the one I bought - a double-movie pack from Fox which pairs it with an equally good British naval war movie, Sink the Bismarck. The movie was shot in colour and Cinemascope and the anamorphic transfer looks great.

The Enemy Below avoids the obvious temptation of pushing a simplistic anti-war message.  That’s not to say that it glorifies war but it has a more subtle message, that the experience of war can lead to mutual respect and even sympathy between enemies. This is an intelligent war movie that is also tense, exciting and thoroughly entertaining. In fact I rate is one of the best war movies ever made. Very highly recommended.
Posted by dfordoom at 11:18 AM