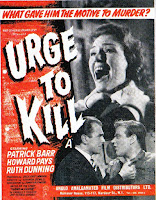 When the Edgar Wallace B-movies made by Britain’s Merton Park Studios between 1960 and 1962 were repackaged for television in the US (as the Edgar Wallace Theatre) a number of other B-movies with no Wallace connection were included as well. One of these was Urge to Kill, with a screenplay by James Eastwood and based on a play by Gerald Savory.

One thing that has to said for this movie - it hits the ground running with the first murder occurring before the two minute mark. It’s immediately obvious that this is going to be a psycho killer murder mystery.

The setting is a somewhat depressing English small town. Auntie B (Ruth Dunning) is an amiable soul who runs a boarding house. Her nephew Hughie (Terence Knapp) is moderately retarded although he’s friendly and good-natured. Of course we know that Hughie is going to be a suspect. 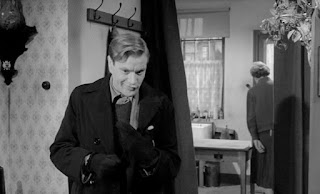 The other lodgers include Mr Forsythe, a rather prim former school master now well into middle age. It’s fun to see Wilfred Brambell, later to find fame as the grubby old man in Steptoe and Son, playing the straitlaced, pious, very proper and obviously well-educated Forsythe. Also lodging with Auntie B is Charles Ramskill (Howard Pays), a smooth young man with ambition. Auntie B’s friend Mrs Willis is trying to set Charles up with her daughter Lily (Anna Turner) but although Lily herself is keen on the idea it’s clear that Charles prefers his women to be a bit more exciting than the earnest and slightly frumpy Lily.

The murder of the daughter of the landlord at the Anchor public house causes a great deal of excitement and consternation. The evidence seems to point towards Hughie, and the townspeople are certainly convinced that he is the killer. Feelings are running high. This is one of those unpleasant movies in which rural and/or working-class people are portrayed as hateful bigots who will turn on anybody who is different. 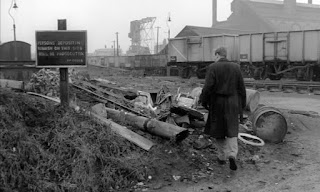 Another murder follows. Another young woman brutally strangled. Superintendent Allen (Patrick Barr) is under pressure to make an arrest. But is Hughie really the murderer? And whoever the murderer is, will he strike again?

It’s never explicitly mentioned but the sexual nature of the crimes is made rather obvious.

Solving the mystery here is not going to stretch the mental capacities of the average viewer. It’s also fairly clear that Superintendent Allen has a pretty fair idea of the strangler’s identity. With the mystery not adding up to much the film has to rely on the suspense angle and it doesn’t really rise to any great heights in that department either. 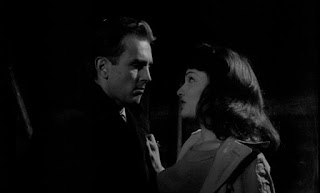 This is also, even by Merton Park Studios standards, a very low-budget movie with minimal location shooting and pretty much everything being shot on a handful of not overly impressive sets.

If I’ve made this movie sound rather dull then I’m afraid that’s because it is rather dull. British B-pictures of this era are often surprisingly good in spite of their budgetary limitations but this one never shows any sign of being anything other than a very routine by-the-numbers B-picture.

The acting isn’t too bad. Terence Knapp is reasonably convincing as Hughie. 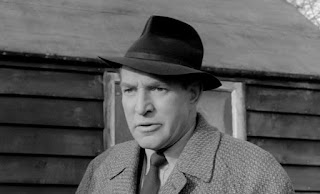 Network have released all the Merton Park Studios Edgar Wallace B-films in a number of boxed sets and they’ve thrown in as extras some of the non-Edgar Wallace titles I alluded to earlier, including this one (in the first of their boxed sets). Image quality is extremely and the transfer is anamorphic.

Urge to Kill is harmless enough but it’s definitely along way from the top rank of British B-features of its era. If you’re going to buy the Edgar Wallace boxed set then you’re getting it as an extra which is just as well since it would certainly not be worth purchasing on its own merits. Hard to recommend this one I’m afraid.
Posted by dfordoom at 4:26 PM