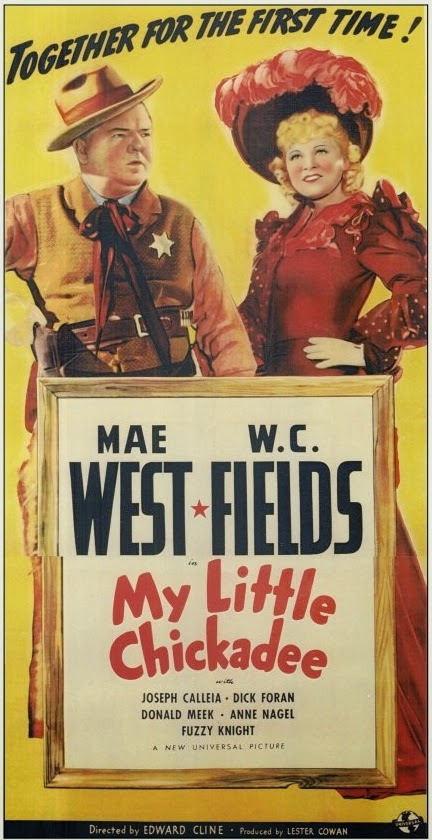 Universal must have thought they had a surefire winner on their hands with their 1940 comedy My Little Chickadee. Bringing together two outrageous comic talents in the larger-than-life persons of Mae West and W. C. Fields - what could go wrong? In fact it worked spectacularly well for them at the time - the movie was a box-office bonanza for the studio. Despite its contemporary success My Little Chickadee seems to be regarded with mixed feelings these days, even among fans of the two stars.

Mae West was responsible for the screenplay, with Fields adding a couple of scenes and much of his own dialogue. The problem of course was that unsurprisingly Mae West saw the film as a Mae West film, while equally unsurprisingly Fields saw it as a W. C. Fields film. In spite of its success the two stars never worked together again. This was to be West’s last successful movie. The career of W. C. Fields was also drawing to a close although he followed up My Little Chickadee with what is probably his greatest film, The Bank Dick. 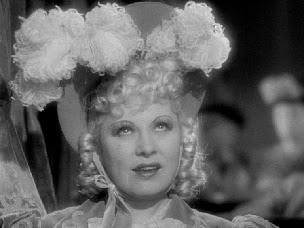 The setting is the Wild West. This suited Mae West who always preferred the fashions of the 19th century. She plays Flower Belle Lee, who has just been run out of town by the local guardians of morality. Her troubles are partly the fault of the infamous Masked Bandit, with whom she has been seen in compromising circumstances.

On the train taking her out of town she runs into Cuthbert J. Twillie (W. C. Fields). She forms the totally mistaken impression that he is a wealthy man so she agrees to marry him. It’s more than a whirlwind romance - they are married there and then, by a preacher who just happens to be on hand. What Twillie doesn’t know is that the preacher is no preacher at all. 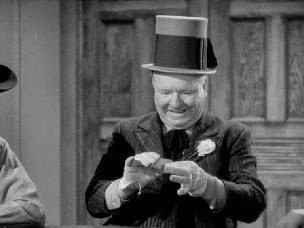 On arrival in Greasewood City Flower Belle attracts the romantic attentions of the town’s leading citizen, Jeff Badger (Joseph Calleia). He might be the leading citizen but he’s far from respectable, in fact he’s quite a rogue but that’s the kind of man Flower Belle likes. Cuthbert J. Twillie has meanwhile been made Sheriff of Greasewood City, thanks to his boastful accounts of his heroic role in defending the train from the attacks of hordes of Indians.

The plot offers both West and Field ample opportunities to strut their stuff and mostly it allows them both to concentrate on doing what they do best. 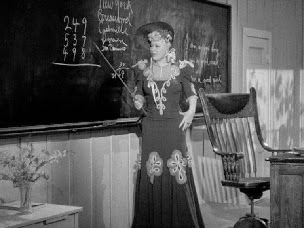 The Production Code cramped West’s style quite a bit although she still manages to get away with a certain amount of trademark Mae West outrageousness. Fields displays his ability to combine superb visual humour with delightfully acerbic verbal gags.

This movie is perhaps just a trifle too long at 83 minutes but in general it keeps the gags coming at a respectable pace.

I personally find that a little bit of Mae West goes a long way so the fact that she has to share her screen time with Fields doesn’t bother me. I’m much more of a fan of W. C. Fields and to my way of thinking this movie is at its best in the scenes dominated by Fields. It’s not quite as laugh-out-loud funny as Fields’ best movies but he still has some great moments. 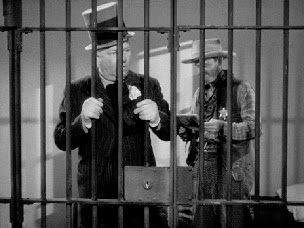 If you haven’t yet experienced the delights of the comedy of W. C. Fields this film is probably not the best place to start - The Bank Dick, The Old Fashioned Way, It’s a Gift and Never Give a Sucker an Even Break are all better and funnier films. And it’s certainly not Mae West’s best movie.

Those who demand political correctness from their movie entertainment will be in serious danger of apoplexy while watching this movie.

My Little Chickadee is available on DVD individually, in the Mae West Glamour Collection boxed sets and in several boxed sets devoted to the movies of W. C. Fields. My copy was included in the wonderful 17-movie Region 2 W. C. Fields boxed set. The transfer is very good but there are no extras.

My Little Chickadee is a long way from being the best of the movies of W. C. Fields but it’s still thoroughly enjoyable and far better than its modern reputation would suggest. Recommended.
Posted by dfordoom at 1:44 AM