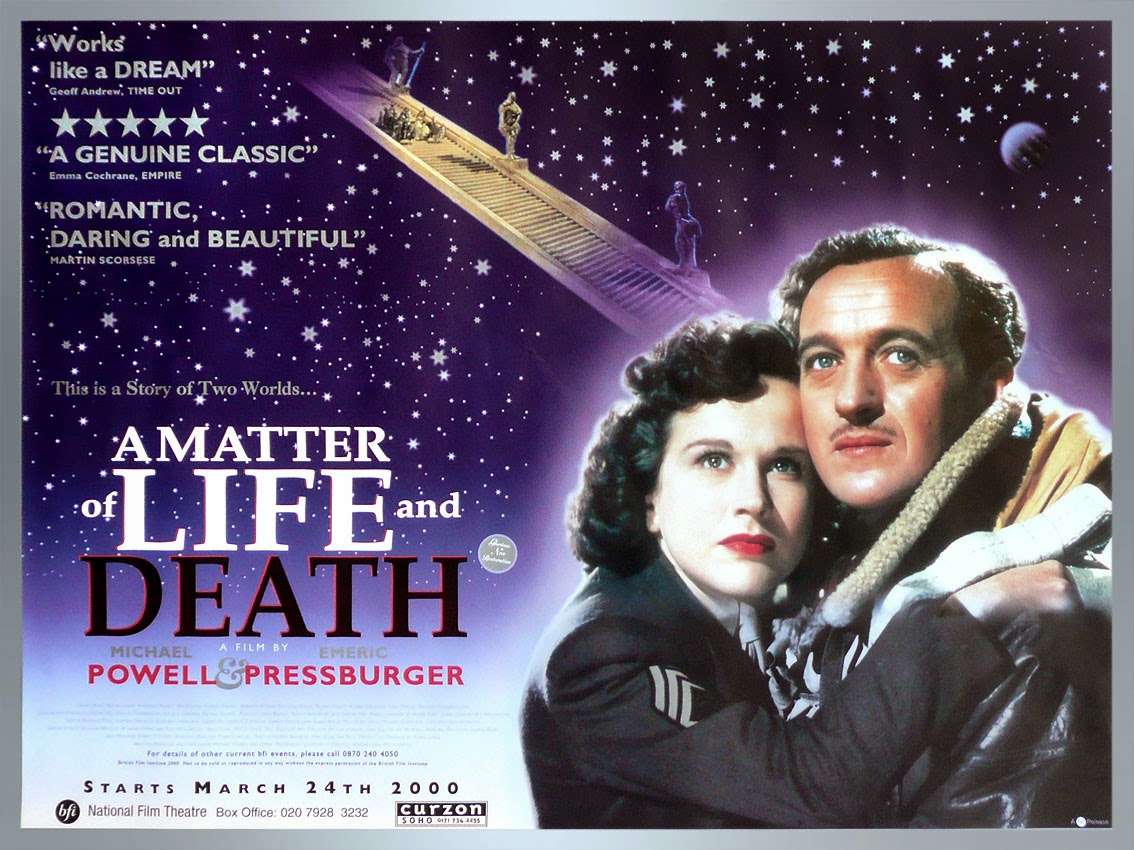 Michael Powell and Emeric Pressburger’s A Matter of Life and Death (also released as Stairway to Heaven) is a wildly ambitious and complex film but ultimately it has to be consigned to the flawed masterpiece category. There is much here to admire, and much that is merely cringe-inducing.

The initial inspiration for the movie was a real-life incident - a British airman had fallen out of his aeroplane without a parachute but had somehow survived. Powell and Pressburger have taken that incident and posed the question - what if this airman was meant to die?

The movie opens on a foggy evening in May 1945 with a crippled British Lancaster bomber limping back to base. Most of the crew members have baled out, leaving only Squadron Leader Peter Carter (David Niven). Peter knows his number is up. He has no parachute, the aircraft’s landing gear is hopelessly damaged and the aircraft is barely under control. He knows he is going to die and he accepts this. He has however made contact with base, in the person of a young female American sergeant radio operator named June (Kim Hunter). Peter is quite happy to spend his last few minutes in this world chatting to a pretty and charming girl. He has already decided what he is going to do. He’s going to jump, parachute or no parachute. It’s better than going down on a burning aircraft.

Peter wakes up on a beach. He assumes he must be in Heaven since he couldn’t possibly have survived. It’s an odd sort of Heaven though. It has dogs, although Peter likes the idea of a Heaven that includes dogs. But then he spots a Mosquito light bomber flying over the beach. Dogs are one thing but surely there aren’t bombers in Heaven? He begins to suspect that he isn’t dead after all. And then he spots an American girl on a bicycle. The girl is of course June. 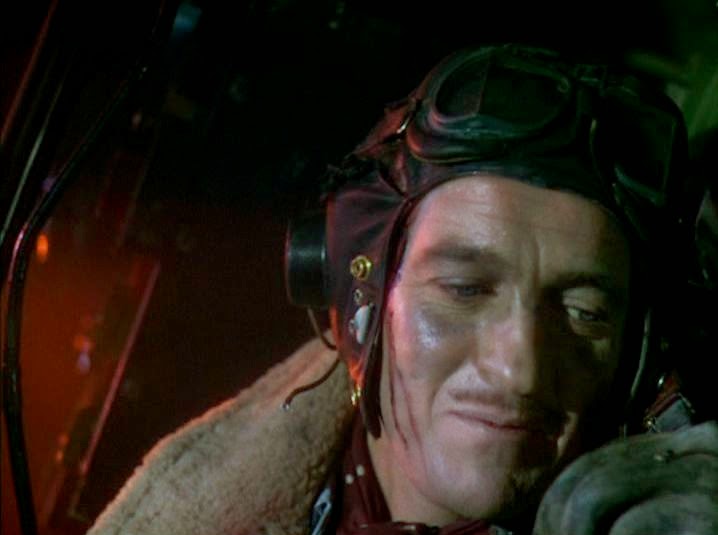 So it seems like a happy ending for Peter. He and June had already started to fall in love while talking on the radio and the romance quickly blossoms. He still can’t think how he managed to survive but obviously he did and now everything is rosy. Until Conductor 71 (Marius Goring) turns up. Conductor 71 is a heavenly conductor. He had been supposed to guide Peter to Heaven but he’d been unable to find him in the fog. Now he explains that a mistake has been made and suggests that Peter should accompany him to Heaven forthwith. Peter however has no intention of doing so. He’s in love and besides if the heavenly bureaucracy has made a mistake it’s hardly his fault. Heaven should simply admit its bungle and leave him to enjoy his life. Of course, as Conductor 71 explains, it’s not that simple. There are procedures to be followed. Peter can if he likes lodge an appeal but it’s not likely to be granted.

As you might imagine June is rather disturbed to find that her handsome new boyfriend talks to heavenly messengers. She’s a practical girl so she consults her friend Dr Reeves (Roger Livesey). Dr Reeves is a pioneer in a new field of medicine - neuroscience. It doesn’t take him long to make a diagnosis - Peter has brain damage as a result of a concussion he suffered a couple of years earlier. It’s the kind of brain damage that produces exactly the sorts of hallucinations that Peter is suffering from. It can be corrected by surgery but there is a complication. The mind is a complex thing. Peter believes he can only live if he wins his case in the heavenly Court of Appeal. If he loses the case then even if the surgery succeeds he will lapse into permanent madness. Dr Reeves has to convince Peter that he can win his case. 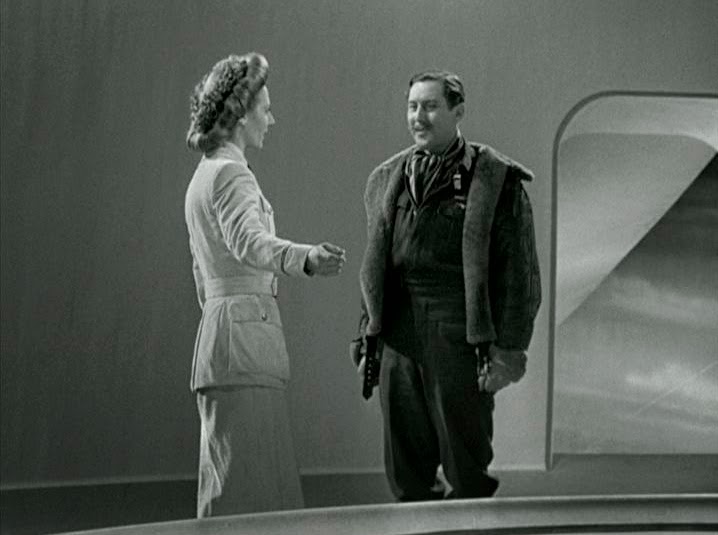 Peter’s fate now hinges on two races against time - Dr Reeves has to find a neurosurgeon who can carry out the operation while Peter has to find a defence counsel to fight his case in Heaven. Powell and Pressburger weave these two plot strands together with remarkable skill and subtlety.

So far so good. Clever ideas, intelligently developed, with just enough ambiguity. We know  the Heaven scenes are all happening in Peter’s mind - or do we? Perhaps when a man’s life hangs in the balance Heaven really does take an interest in the proceedings. And perhaps things that are only in our minds do have a certain reality. Maybe the world of the subconscious is real in some sense? Most importantly the ideas are not just clever but they have an emotional impact as well. Is love stronger than death?

The problems with this movie begin with the heavenly trial scene when a new theme is introduced (actually it’s been there all along in the background but now it moves to the foreground). This theme is Anglo-American relations, and Britain’s place in the postwar world. The Anglo-American alliance had always been somewhat more strained than anyone at the time cared to admit and it was going to get a lot more strained (culminating in Britain’s humiliation by the US in the Suez Crisis in 1956). Powell and Pressburger use the trial scene to argue for the naïve belief that the relationship could continue as a partnership of equals. The whole trial sequence is dull and unconvincing. 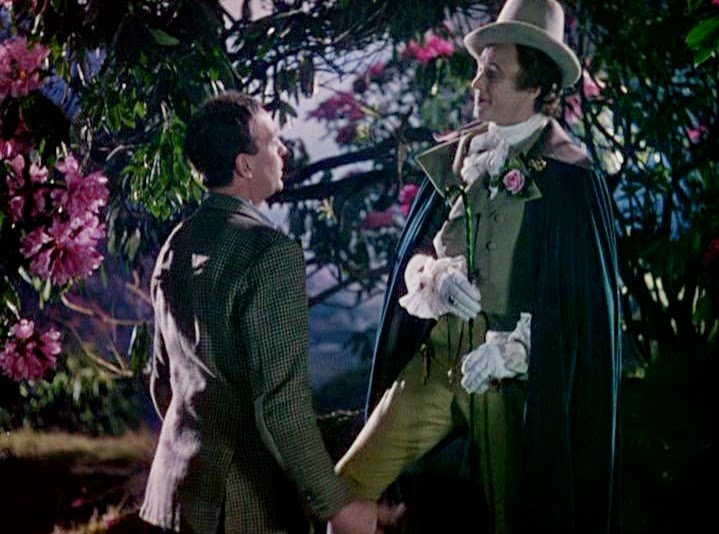 Even worse, the movie puts Peter Carter forward as an example of all that is best in Britain and as Britain’s hope for the future. And what is Peter Carter in civilian life? He’s a poet. If there’s one thing that a Britain facing the colossal challenge of the postwar world did not need it was poets. Peter Carter is in fact representative of the kind of over-educated over-privileged Oxbridge types who had been responsible for Britain’s long decline. He’s a Squadron Leader in the RAF and it’s fairly obvious he’s the sort of young Englishman who got to be an officer by going to the right schools. Unfortunately Powell and Pressburger really seemed to believe that poets represented the future of Britain. The trial scene which is supposed to convince us of the dynamism of postwar Britain merely succeeds in demonstrating how hopelessly stuck in a largely imaginary past the nation was.

So what we have in effect are two movies in one. One movie is brilliantly imaginative and daring and quite superb; the other is dull and turgid and rather cringe-inducing.

On the plus side, like all Powell-Pressburger movies A Matter of Life and Death is visually sumptuous and magnificently inventive. Jack Cardiff’s cinematography is superb and the technique of shooting the earth-bound scenes in Technicolor and the heavenly scenes in black-and-white works surprisingly well. One particularly good moment comes as Dr Reeves surveys the village with his camera obscura - it’s the sort of visual tour-de-force that Powell was so good at. 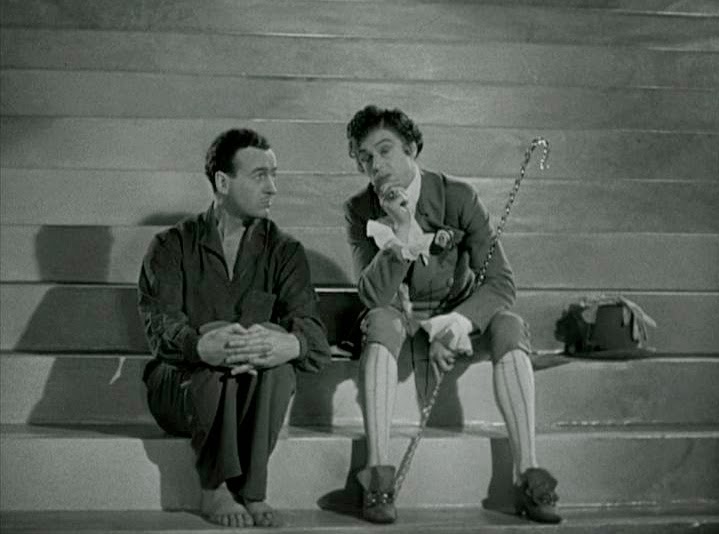 David Niven and Kim Hunter are very strong in the lead roles. The other performances are slightly odd and a bit mannered but given the unconventional nature of the film they work well enough.

This movie was released in a two-movie DVD set paired with Powell’s much later (and very uneven) Australian movie Age of Consent. The transfers are excellent. A Matter of Life and Death comes with a brief but very astute introduction by Martin Scorcese (a huge Powell-Presburger fan) and an audio commentary.

A Matter of Life and Death has some huge flaws but on the whole the good outweighs the bad, and the good is very good indeed. Recommended.