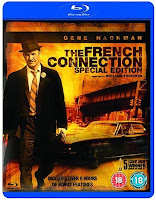 The French Connection is widely regarded as one of the great cop movies of the 70s. I’m ashamed to say that for some inexplicable reason I had never seen this film until now. In some ways it’s typical of 70s cop movies while in other ways it’s highly atypical. Like all of William Friedkin’s movies it’s slightly quirky and worth seeing.

Jimmy “Popeye” Doyle (Gene Hackman) and his partner Buddy “Cloudy” Russo (Roy Scheider) from the New York Narcotics Bureau are relaxing in a night club when they notice a group of known big time criminals. Nothing odd about that, except that there is one guy in the group who is spending an enormous amount of money and they’ve never seen him before. That definitely is odd. Doyle and Russo know all the big criminal operators in the city. Intrigued, they decide to tail the big spender. They see enough to convince them that the guy is involved in something big. Their hunch is that it’s something very big indeed, and they’re right. They have stumbled onto a huge deal to import $32 million of uncut heroin into the US from Marseilles.

After weeks of patient surveillance they are slowly building their case but their problem is that the principal in this drug smuggling deal is a very very smart operator indeed. The case proves to be frustrating and seems destined to lead nowhere. But Popeye Doyle never gives up. Never.

This is a slow-burn cop thriller. The first 65 minutes is essentially a police procedural. If you want to capture a major criminal you need to be very patient and very methodical, and that’s exactly the approach Friedkin takes with his movie. The pacing is leisurely but the approach pays off. Doyle, Russo and the other cops spend hour after hour tailing their suspects. This could be extremely boring but it isn’t. It isn’t boring partly because the details of police surveillance methods are fascinating but mostly because Friedkin is so skillful at building atmosphere and at making this kind of routine police work visually interesting. There’s a particularly good sequence in which Popeye is trying to tail a suspect on the subway. It’s tense but it’s also clever and witty.

The movie does eventually get exciting - very exciting. And the excitement is all the more effective since we’ve had to wait for it. The legendary car chase scene (which only involves one car but you’ll have to watch the movie to find out why) lives up to the hype. 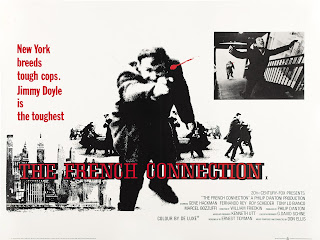 One of the cool things about the way the movie switches gears is that it’s really just a change in pacing, not a change in content. Doyle has been chasing the bad guys right through the picture. Initially it’s a slow-motion chase as he shadows the criminals through the streets of New York. Then it suddenly becomes a hyper-fast adrenaline-charged chase.

The film was based on a real-life case. Not just inspired by a real case, but based very closely on it. And Popeye Doyle and Cloudy were based on two legendary real-life New York narcotics cops, Eddie Egan and Sonny Grosso. Director William Friedkin got to know Egan and Grosso and went out on drug busts with them. Egan and Grosso not only worked as advisers on the set, they both played roles in the movie (Egan has a fairly substantial part as Popeye’s boss and went on to have quite an acting career). The two real-life cops made sure that their movie counterparts behaved the way actual cops would have behaved. 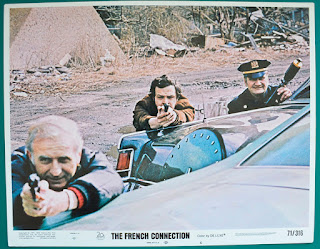 I’ve never been able to make up my mind about Gene Hackman. He certainly seemed to be good at playing unsympathetic characters. Characters don’t come much more unsympathetic than Popeye Doyle. He’s abrasive and bad-tempered and while a good cop has to be obsessive he’s a bit too obsessive for comfort. We do however feel some empathy for his sheer doggedness. Friedkin came to have a certain admiration for both Egan and Grosso and while Doyle isn’t obviously likeable the viewer ends up developing that same sort of grudging respect for him.

Of course in the 70s anti-heroes were fashionable and heroic cops were unfashionable. This got a bit tiresome after a while. It’s difficult to care about sociopathic anti-heroes and if you don’t care about the protagonist it’s hard to care about the film. With Popeye Doyle Hackman at times goes perilously close to losing our sympathy but on the whole he’s successful at maintaining a difficult balancing act. We’re sometimes appalled by Doyle but we can’t hate him.

Roy Scheider is solid as Russo but we don’t get to know the character so it’s hard to get too interested in him. 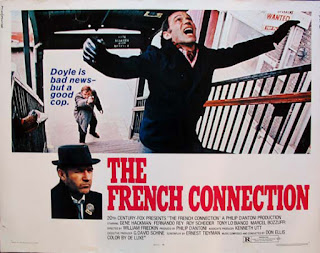 Fernando Rey steals the film by default. Charnier is a bit of a cardboard character but at least he has style.

The ending of the movie is certainly a problem. It’s disappointing in the way endings of 1970s movies often are disappointing.

Since the characters are not always exactly likeable the movie has to rely on action, atmosphere and style. Fortunately it has plenty of all three ingredients. The atmosphere is typical of 70s cop movies but even more so than usual - this is a very seedy, grimy, grubby and even squalid movie. This relentlessly downbeat doom-laden atmosphere is one of its main claims to being considered a neo-noir (the other being obviously the destructive and self-destructive qualities of its protagonist).

Is this a neo-noir? It probably has at least as strong a claim to neo-noir status as other 70s crime movies such as Dirty Harry and Death Wish. The French Connection reminds me a little of Fritz Lang’s The Big Heat (a movie that has been much misunderstood in my view). It raises questions about the dangers of obsessiveness but it also raises questions about the effects that uncontrolled crime can have on society and on individuals. Popeye Doyle might not be the sort of guy you’d want to invite to your house for a dinner party but when you consider the scale of the crimes he’s dealing with it’s perhaps a little unfair to complain that he doesn’t deal with such problems gently. As is the case with the protagonists of The Big Heat and Dirty Harry you could argue that if society doesn’t confront the problem of crime then society is going to need guys like Dave Bannion, Harry Callaghan and Popeye Doyle to clean up the mess. 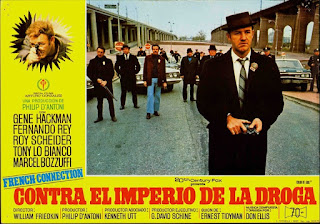 It’s not easy to tell exactly where Friedkin stands on these issues, or whether he really intends Doyle to be a hero or anti-hero or even a villain. As long as Friedkin sticks more or less to the facts of the real case he’s on firm ground. When he departs from the real-life story (as he does quite radically in several key scenes) the movie becomes less sure-footed. Even worse, there are important elements that are likely to be missed unless you listen to his audio commentary. Friedkin wanted to address issues of high-level corruption but such issues just aren’t made effectively by the film itself.

The Blu-Ray release raises some problems. Image quality is wildly variable and is often barely VHS quality. Partly this is because of the way the film was originally shot - on location and using natural light which means that some of the night scenes are very dark and very murky. It also seems that for the Blu-Ray release Friedkin tinkered with the colour with the result that the film doesn’t look the same now as it did when originally released.

On the plus side there’s an incredibly interesting and informative director’s commentary by Friedkin.

The French Connection almost lives up to its glowing reputation. Of the three outstanding American neo-noir crime films of the 70s (the others being Dirty Harry and Death Wish) The French Connection is the least satisfactory. Having said that it’s still an impressive movie and I still highly recommend it.
Posted by dfordoom at 9:39 PM