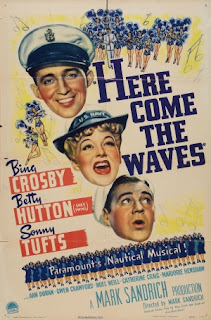 I’ve become quite a fan of Bing Crosby’s musicals so I was predisposed to like Here Come the Waves. I did enjoy it, but perhaps not quite as much as I’d anticipated.

Released in 1944, this was obviously an attempt by Paramount to show they were doing their bit for the war effort. Betty Hutton plays a dual role as twin sisters Rosemary and Susie Allison, a couple of singer/dancers who get carried away by doing a song promoting recruitment for the WAVES and end up joining up themselves.

Rosemary is the elder sister by twelve minutes and she’s the sensible practical one. Susie is blonder and flightier. Much flightier. In fact she’s your basic Hollywood Dumb Blonde. Susie is a fan of popular crooner Johnny Cabot (Bing Crosby). Actually to say she’s a fan is an understatement. She pretty much swoons every time she listens to one of his records. When she actually meets him she faints dead away.

Naturally she’s excited when she learns that Johnny has enlisted as well. With only a million or so people in the Navy she’s bound to run into him again. And of course she does. 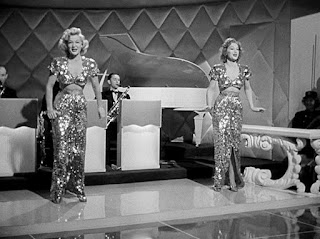 The problem is that Johnny falls for Rosemary rather than Susie. Johnny’s best pal Windy (Sonny Tufts) falls for Rosemary as well. Susie and Windy come up with all sorts of elaborate schemes to disrupt any romance between Johnny and Rosemary. This should be easy since Rosemary doesn’t even like Johnny but she soon shows disturbing signs of changing her mind about him.

Since Betty Hutton plays both identical twins it’s not hard to guess that at some stage the plot will make use of this and we’ll see Rosemary mistaken for Susie or Susie mistaken for Rosemary. This does indeed happen.

One of Susie’s bright ideas was to forge a letter from Johnny to the naval authorities suggesting that he should put on a show to help recruitment for the WAVES. This will take him away from his ship and therefore away from any chance of combat - the idea is that Rosemary will then think he’s a coward. 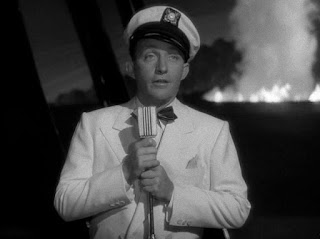 The show turns out to be a great success and of course the Allison twins are part of it. Meanwhile Johnny is trying to do everything he can to get sent back to his ship.

The plot is nothing startling but it’s sufficient to provide some romantic intrigues and provide the excuse for the musical numbers.

Mark Sandrich had directed some of the best of the Astaire-Rogers musicals of the 30s so he was obviously qualified to helm this production, which he does efficiently enough. 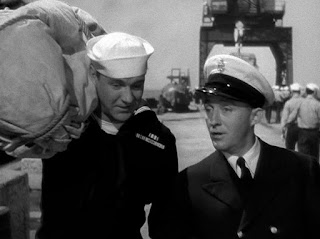 Bing Crosby is very good. Betty Hutton throws herself into her roles with enthusiasm - perhaps too much enthusiasm! It’s a matter of taste of course but her performance as Susie is sometimes a bit too much of a good thing.

My other main reservation about this film is also a matter of taste. My own preference is for musicals that, if they’re going to attempt big musical production numbers, offer as much visual as aural splendour. Here Come the Waves doesn’t quite manage to do that. The production numbers lack any real visual flair although the songs are pleasant enough. The final production number is little more than a recruiting ad for the US Navy which would have been OK (you expect that in a wartime film) but it’s rather stodgy and unimaginative. 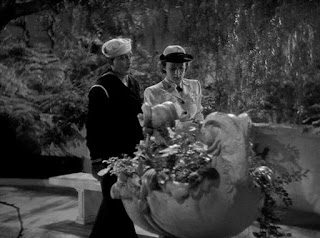 The best thing about the movie is the amusing treatment of Johnny Cabot’s fame. Bing Crosby was arguably the first genuine pop star in the modern sense and he did inspire fanatical devotion among his admires, especially those of the female persuasion. Therefore Johnny Cabot spends much of the movie trying to avoid being mobbed by female fans. The plot actually makes some clever use of this.

Here Come the Waves is included in Universal’s excellent Bing Crosby: Screen Legends DVD boxed set. The transfer is extremely good. There are no extras.

Overall this is a frothy and fairly entertaining musical. How much you enjoy it probably depends on how you feel about Betty Hutton. If you’re not bothered by her excessiveness then you’ll love the picture. If her over-the-topness does bother you might not be quite so entranced but since the DVD boxed set is so good and so very much worth buying you might as well give it a go anyway. So with that minor caveat, recommended.
Posted by dfordoom at 10:16 PM