recent reviews from my other movie blog

Duel in the Jungle (1954) is a lightweight but fun Anglo-American adventure romp with Dana Andrews.

Tarzan and His Mate (1934) is one of the most notorious of all pre-code movies and it’s also quite possibly the best-ever Tarzan movie.

The Mysterious Dr. Fu Manchu (1929) was the first of the Paramount Fu Manchu movies with Warner Oland (better-known as Charlie Chan) as Fu Manchu. And it’s quite entertaining.

Against All Flags (1952) was one of Errol Flynn’s later swashbucklers. Not in the same league as the great Flynn adventure films but it’s worth it for Anthony Quinn’s gloriously over-the-top supporting performance.

Carry On Cleo (1964) was the best movie of the entire Carry On series. And, very surprisingly for a Carry On movie, the production values are remarkably high.

The Night Has Eyes (1942), a British thriller with a very strong admixture of the gothic. One of James Mason’s early starring roles. 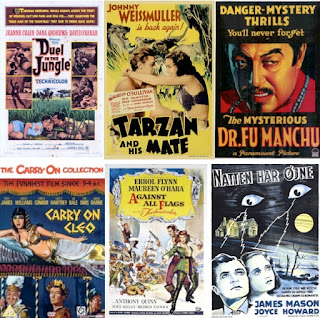