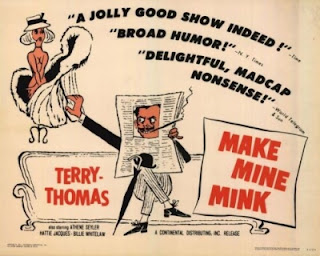 Make Mine Mink is a charming feelgood 1960 British comedy starring the great Terry-Thomas. This time he’s the leader of a gang of very unlikely crooks.

Dame Beatrice Appleby (Athene Seyler) is an elderly lady who devoted herself to charity work. Or at least she did until her money ran out. She supplements her income by taking in lodgers, and a motley collection they are. There’s Major Albert Rayne, for whom the war years were the best years of his life. Of course the war years were not all that dangerous for him, since he commanded a mobile bath unit. There’s the seriously scatterbrained Miss Pinkerton (Elspeth Duxbury), held together by regular doses of her nerve tonic. And there’s the very formidable Nanette Parry (Hattie Jacques).

Dame Beatrice can only afford one servant. Lily (Billie Whitelaw) is devoted to the old lady, as well she might be. When Lily got out of prison Dame Beatrice have her a chance. 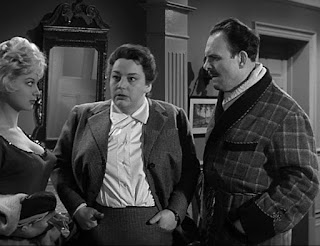 Now Lily has got herself into trouble once again. She wanted to give Dame Beatrice a present and when a neighbour, in the midst of a furious argument with his wife, hurled an extremely valuable mink coat out of the window Lily retrieved it. So she didn’t exactly steal the coat. Not exactly. But the police might well misunderstand her actions.

There’s only one thing for Dame Beatrice and her lodgers to do. They have to return the coat. An undertaking which proves even more challenging than stealing a coat. Major Rayne realises immediately that the matter must be approached as a military operation. In actual fact it’s more like a comedy of errors but somehow they manage to pull it off. 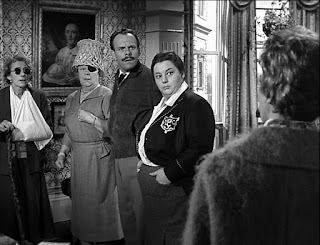 It occurs to them that if they can return a mink coat successfully under such difficult circumstances then they could just as easily steal one. Not for gain of course. Same Beatrice’s charities always need money. So it wouldn’t really be doing anything terribly wrong. So they decide to give it a go and against all the odds they pull off a spectacular robbery.

And they discover that they like doing this sort of thing a great deal. They suddenly feel alive again.  They’re no longer a bunch of superannuated eccentrics. They’re daring thieves, but with a touch of Robin Hood. Soon they’re the most successful gang in London. They’re complete amateurs but that’s why they succeed - their methods are so outrageously bizarre that the police are baffled. 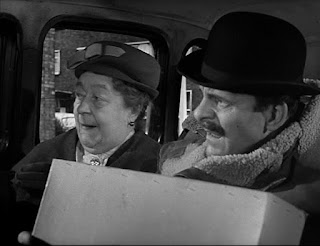 The problem is Lily. She’s the only actual criminal (or ex-criminal) in the household and she takes a very old-fashioned view of such things. She actually thinks stealing is wrong. She also understands that the police tend to take a dim view of thieving, even for good causes. To make things more awkward Lily is dating a policeman.

It’s a recipe for non-stop fun and that’s what this movie delivers. There’s a nice mix of verbal and visual humour. There are a few mildly risque gags, but they’re actually funny. The robberies are inspired lunacy. Everything always goes wrong but somehow this gang always seems to get away with it. The scene in which the Major tries to fence for their stolen goods is a wonderful comic set-piece. 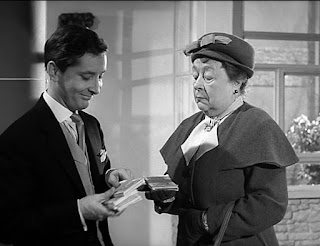 Terry-Thomas is best-remembered for roles as dastardly villains and shameless cads but he was equally adept at playing well-meaning sympathetic bumblers and that’s how he plays Major Rayne. In fact all of the characters are both sympathetic and interesting. We genuinely care what happens to them, although this movie is very careful to avoid any hints of mawkish sentimentality. And the characters are played by a galaxy of British comic talent. Hattie Jacques shines, as always. Look out for Kenneth Williams in a minor part as a very up-market fence. Billie Whitelaw is essentially the straight-woman, playing the only sane member of the household, and she manages to do it in an oddly sexy way.

Make Mine Mink is absolutely delightful. Sheer joy from start to finish. Very highly recommended.
Posted by dfordoom at 12:52 PM