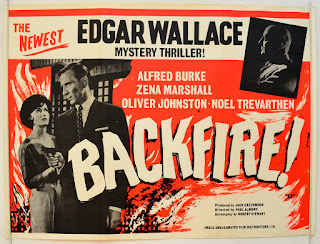 Backfire! is another of the British Merton Park Edgar Wallace B-movies of the early 60s and it’s a reasonably competent entry in the series.

Bernard Curzon (Oliver Johnston) is the founder of a cosmetics company, Venetia Beauty Products. The company has been very successful but as Curzon is getting on in years he had decided to take on some new partners, to revitalise the firm. Mitchell Logan (Alfred Burke) and his wife Pauline (Zena Marshall) have certainly had a dramatic effect on the company. They have all but ruined it. Sales are practically non-existent. The company cannot pay its bills. Even worse, the books are not likely to stand up to any close scrutiny. Things look hopeless, but Mitchell has a plan. The company is broke but the factory is insured for a great deal of money. If a fire were to break out then all their financial problems would disappear in a puff of smoke so to speak. It’s a foolproof plan. 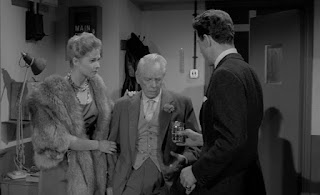 Of course it turns out to be not quite so foolproof after all. Clever yes, and well executed, but there’s always the little unforeseen details, in this case a mink coat and a Hungarian wedding.

Even allowing for such minor irritations it still seems they will get away with it. All they need is a bit of luck, or at least the absence of bad luck. What they don’t need is a young insurance investigator with all the zeal and enthusiasm of youth.

And due to those little unforeseen details mentioned earlier this is not just a case of arson. It’s murder as well. 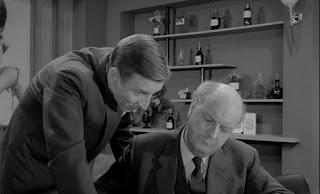 There are no great surprises in the plot but the script (by Robert Banks Stewart who had an illustrious career as a television writer) is serviceable and well constructed. Paul Almond’s direction is fairly straightforward but he knows how to build suspense and he doesn’t permit any dull moments in the film’s 61-minute running time.

The cast is the movie’s biggest strength. Before finding fame with the long-running (and excellent) Public Eye television series Alfred Burke was a familiar face in British B-movies. This movie gives him a rare starring role. He’s nicely sneaky and cold-blooded. He seems to be attempting an American accent but it comes and goes. Fortunately it doesn’t detract from his performance. Zena Marshall is good as Pauline Logan, a classy woman but rather a nasty piece of work. Suzanne Neve gets the good girl role as Curzon’s daughter and secretary Shirley and she’s a rather charming if not wildly exciting heroine. John Cazabon is creepy in a low-key but effective way as the firebug Willy Kyzer. 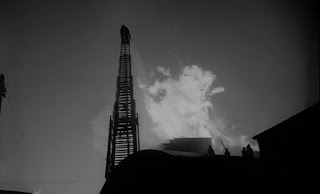 The cosmetics angle allows for some touches of glamour that add a bit more interest. It’s also useful in making the arson more plausible, cosmetics factories being full of highly inflammable chemicals so that when they burn you can rely on them to burn to the ground in a conveniently short time. The low budget (and Merton Park movies were very low budget) is no great problem since the people making these Edgar Wallace potboilers were used to such things and knew what they were doing. 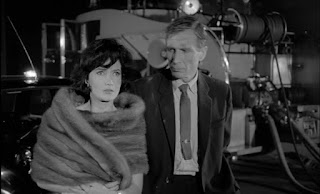 As usual Network have come up with an excellent anamorphic transfer. Backfire! is one of the seven movies that make up Network’s Region 2 Edgar Wallace Mysteries: Volume 2 DVD set. There are no extras as such included with the individual movies but Network more than make up for this by throwing in at least one bonus movie in each set (and the bonus movies are often extremely good).

Backfire! is nothing more than a fairly routine B-movie but it’s a well-made one and it’s a harmless and fairly enjoyable time-killer. Recommended.
Posted by dfordoom at 12:03 PM