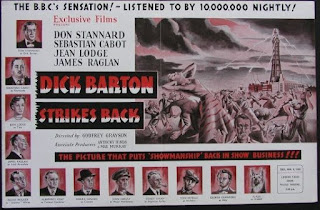 Dick Barton – Special Agent was a popular BBC spy thriller radio series which was broadcast from 1946 to 1951. In 1948 Hammer Films made the first of what was destined to be a series of three Dick Barton films. The films were low-budget features but were very successful. A fourth film was planned but the tragic death of star Don Stannard in a car crash caused Hammer to call a premature halt to the series.

Dick Barton Strikes Back begins with the murder of a British secret agent name Creston. Fellow secret agent Dick Barton and the faithful Snowy White are determined to find the killer. 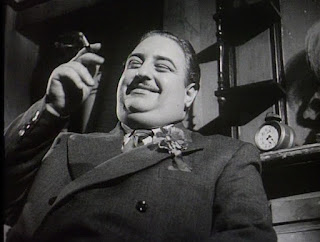 Creston had told Barton that he was on to something bigger than the atomic bomb and he wasn’t kidding. This is something that could mean not just ruin for Britain but the End of Civilisation.

The clever part of the movie is that the evil conspiracy is on a scale that would delight even a Bond villain but it doesn’t require any expensive special effects. It doesn’t require any special effects at all, but it’s still chillingly effective. The conspiracy is in fact very Bond villain-ish. It was made before the first of the Bond novels was published so it’s fair to say that it was inspired by the thrillers of Dennis Wheatley and Sax Rohmer’s Dr Fu Manchu stories (both of which heavily influenced Bond creator Ian Fleming).

The only clues are a tune and a poster for a travelling fair, and a beautiful but dangerous female. 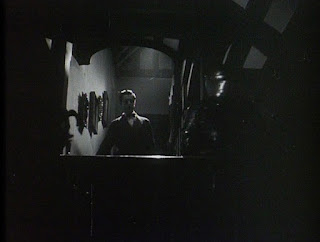 Despite the outlandishness of the plot it’s all played fairly straight (especially compared to the deliberate silliness of the first Dick Barton movie). The decision to resist the temptation to make a lighthearted spoof was I think the correct one.

Dick Barton is one of those heroes who gets by on bravery and determination. His judgment is pretty awful and he has an amazing propensity for walking straight into obvious traps. It’s not that he’s stupid. He’s good at figuring things out. He’s just foolhardy. Which of course allows for lots of narrow escapes from certain death.

Don Stannard is a fine plucky hero. My great fear was that his sidekick Snowy would be an irritating comic relief character but fortunately the comic stuff is kept at an absolute minimum. One amusing thing is that they’re both secret agents but when Barton is invited for dinner to Lord Armadale’s house Snowy eats in the kitchen with the servants. I guess that Barton is the secret agent equivalent of an officer while Snowy is strictly an enlisted man and therefore of course not a gentleman, even if he shares all the risks with Barton. 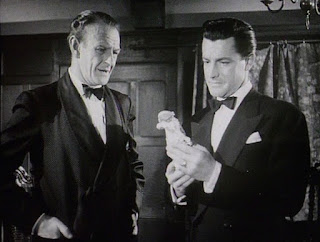 Dick Barton Strikes Back benefits greatly from having a terrific villain in the person of the sinister mater spy Fouracada, played with maniacal relish by Sebastian Cabot. Cabot is almost forgotten now but he was a popular television star in the 1960s (notably in the excellent American private eye series Checkmate) and he was always a delightful larger-than-life presence.

The opening credits make the bold claim that the film was shot mostly on location, which is certainly unusual in a low-budget 1949 film. And it really does seem to feature a lot more location shooting than you’d expect, and the locations are used quite well. The scenes in London Zoo and the completely dialogue-free climactic sequence in the tower are done very well. 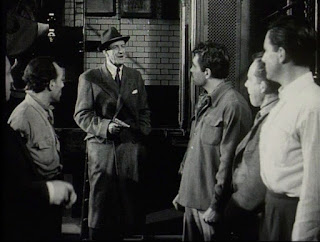 Hammer’s movies of this era were always cheap but never shoddy. They spent very little on their films but what they did spend was spent wisely. This particular movie is visually quite impressive for a low-budget production. This was Godfrey Grayson’s first effort as  director. He didn’t have much of a career but he certainly does a competent job here.

Icon Home Entertainment released all three Dick Barton movies on a single DVD. The transfer are not stellar but they’re satisfactory. They’re fullframe which is of course quite correct.

Dick Barton Strikes Back is by no means a serious spy thriller. It’s an unashamed  potboiler (with a slight mad scientist element) but it never descends into mere silliness. It’s the best of the three Dick Barton films. It’s harmless but enjoyable. Highly recommended.
Posted by dfordoom at 9:52 AM