Undercurrent is a 1946 MGM picture directed by Vincente Minnelli. It’s been described as a thriller and even as a film noir and that was enough to capture my interest. It turns out to be only very slightly noir and not entirely successful. The story has potential but there are serious weaknesses in the execution.

In fact it not only starts out as a romantic melodrama, it remains pure melodrama for a very long time before any thriller elements kick in. That’s not necessarily a problem. I quite like melodrama and it’s something Minnelli had a definite flair for. There is however one major problem, for me at least. The stars are Robert Taylor and Katharine Hepburn. Now Robert Taylor is no problem. He was a fine and very underrated actor. But I really really dislike Katharine Hepburn, for a myriad of reasons. On the other hand it does also feature Robert Mitchum, at that stage not quite a star but on the way to being one. 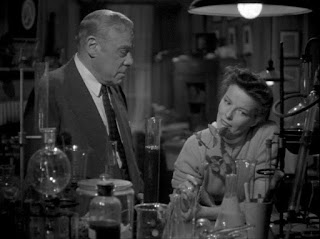 Hepburn plays the dowdy middle-aged Ann Hamilton, daughter of a prominent scientist. She’s unmarried and seems destined to stay the way, until handsome tycoon Alan Garroway (Robert Taylor) appears on the scene and sweeps her off her feet. They are soon married but that means she has to deal with Washington high society, mixing with congressmen and senators’ wives. She feels that she doesn’t fit in, that she’s awkward and dowdy, and she really doesn’t fit in.

All this takes up a large chunk of the film’s running time and it has to be said that it’s rather dull. Nothing much happens at all until Ann finds a book that she thinks belongs to her husband. In fact it belongs to his brother Michael. The brother he hates with a passion. Alan Garroway convinces himself that Ann has started quoting from the book (a book of English pastoral poetry) as a way of baiting him. 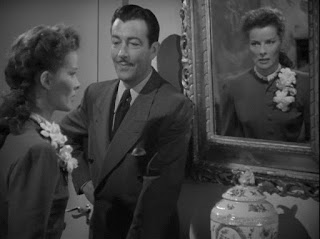 More and more it seems that Michael is coming between Ann and Alan, even though she has never set eyes on him. She doesn’t even know what he looks like. She does hear stories about him though. Contradictory stories. There are even those who think Michael is dead. It’s no use asking Alan. He gets angry and uncomfortable at any mention of his brother. Naturally Ann becomes obsessed with the subject and naturally this leads to trouble.

Now getting back to my problem with Katharine Hepburn. As so often with Hepburn’s performance there’s a brittleness and a lack of real warmth. We need to care about Ann but it’s not easy. The one thing Hepburn was good at was playing slightly odd women and Ann certainly comes across as slightly odd but I’m not sure that it’s the right approach for this story. We’re also supposed to feel that Ann is vulnerable, that she’s a Woman in Peril, but Hepburn just can’t achieve that. She’s too naturally domineering. It was a very unsuccessful piece of casting. 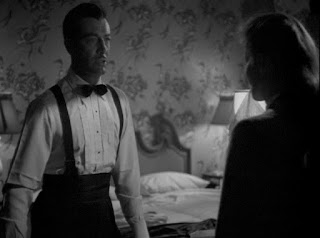 Once Robert Taylor started to move away from his early matinee idol persona he proved to be very good at playing characters whose surface charms conceals an inner darkness. His rôle is Undercurrent is just that sort of rôle. Alan Garroway is all charm but after a while we see hints of cruelty although we can’t be sure if he wants to be cruel to others or whether he’s being cruel to himself. He’s a character who could just as easily turn out to be the hero, or the villain.

Mitchum was a different style of actor but in this film he tries to achieve the same effect. He’s laid-back and perfectly at ease with the world but we’re supposed to still sense that he could well be dangerous. He could also turn out to be the hero, or the villain. The ambiguity of the two major male characters is obviously the core of the movie. Mitchum was a great actor but in this film he’s totally overshadowed by Taylor. 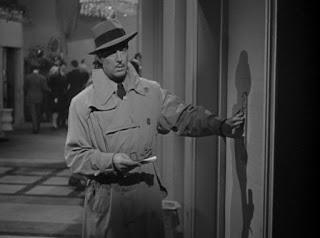 Vincente Minnelli knew how to extract every ounce of melodrama in a story. In this case it helps that the black-and-white cinematographer is by the great  Karl Freund. The visual style is not really noir but it has its moody moments.

Undercurrent slots into the women’s noir sub-genre (mostly dominated by Joan Crawford’s 1940s movies) which combines melodrama with touches of film noir. The miscasting of Katharine Hepburn and the excessively tame performance by Mitchum are the two problems that prevent it from being a success. Robert Taylor’s superb performance almost manages to save it. Worth a rental, and maybe a purchase if you’re a hardcore Robert Taylor fan.
Posted by dfordoom at 6:08 PM