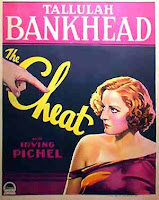 The Cheat is a 1931 Paramount pre-code movie and it’s a remake of Cecil B. DeMille’s 1915 silent version. DeMille’s version was a landmark movie which still stands up remarkably well. We shall see how the 1931 remake stacks up.

Elsa Carlyle (Tallulah Bankhead) is married to stockbroker Jeffrey Carlyle (Harvey Stephens). It’s a happy enough marriage but Elsa is wild and irresponsible. She is extravagant with money. She lives for excitement. She does not have affairs but she certainly enjoys flirting with other men. Recently she’s been flirting with Hardy Livingstone (Irving Pichel). Livingstone is an immensely wealthy collector of Oriental art. He has spent many years in the Far East and rumour has it that his lifestyle has been more than a little scandalous. He’s a man who ignores the social conventions. He’s a bad boy, but a wealthy sophisticated decadent bad boy.

Naturally Elsa finds him rather attractive and enjoys flirting. She knows that Livingstone wants her and that amuses and excites her. That doesn’t mean that she has any actual intention of being unfaithful to her husband. Elsa just likes dangerous games. 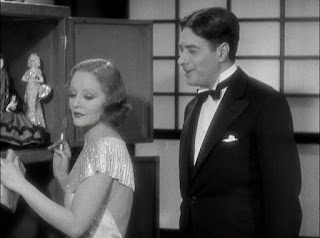 Elsa really is just playing a game but she has a major problem to deal with. She gambles and she has lost $10,000 at the gaming tables. She doesn’t have the money to pay the debt. She can’t ask her husband for the money - things are very tight at the moment and he doesn’t have the money either. He’s working on a big deal and if and when it comes through they will have plenty of money, but Elsa needs that ten thousand right now.

Elsa tries to raise the money by speculating on the stock market, with disastrous results. The money with which she speculated was money she stole from a charity. Now she’s desperate. Livingstone comes to the rescue. He’ll give her the money, but she’ll have to give herself to him. It’s made pretty obvious that it’s a straightforward money for sex deal.

Then Elsa’s husband strikes it rich on the stock market. Elsa tries to buy her way out of her deal with Livingstone. He has no intention of being cheated. If she doesn’t go to bed with he’ll make sure she faces ruin and disgrace. 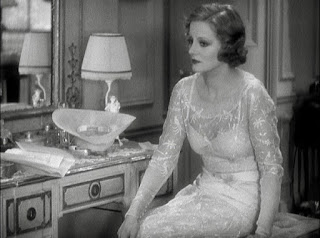 Then there are lots of melodramatic plot twists, there’s a gun involved and Livingstone decides to make sure that Elsa understands that he owns her, by branding her. It’s a scene that still packs plenty of punch. It’s slightly stronger than the equivalent scene in DeMille’s 1915 version. In that version Elsa is branded on the back. In the ’31 version she’s branded on the breast.

That gun gets fired and that leads to a trial and both husband and wife want to take the blame and the trial ends in a riot.

You have to understand that DeMille’s film had been pure melodrama. DeMille loved melodrama and it’s a genre he did better than anyone. The ’31 version follows the plot of the 1915 version very closely indeed. So it is, naturally, pure melodrama as well. I have no problem with that. I’m happy to accept the conventions of melodrama. If you’re not comfortable with the plot contrivances of melodrama you might not be entirely happy with this movie.

By making the villainous character European rather than Asian the racial angle of the 1915 version is removed. Naturally lots of modern reviewers have tried to put that racial angle back in. I really don’t think it’s there. Sure there’s an attempt to create an atmosphere of exotic decadence around Livingstone but I don’t think it’s worth obsessing over. I don’t think the movie is suggesting that Asiatic art leads to decadence. The whole movie has an atmosphere of late Jazz Age all-American decadence. Elsa in her own way is as decadent as Livingstone. 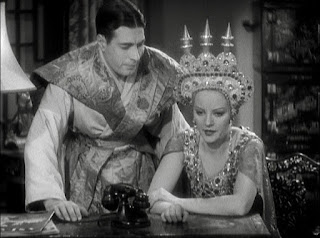 Tallulah Bankhead achieved star status on the stage but was never quite able to translate that into success on the silver screen. She became more famous for being Tallulah Bankhead than for her acting. She was famous for her wild parties, her drinking, her presumed drug-taking and for her habit of taking her clothes off at the slightest provocation. She claimed to have had around 5,000 lovers. So she had a busy life. As to whether her 5,000 lovers included women, it seems possible but doubtful. She certainly enjoyed flirting with women but she enjoyed flirting with anything with a pulse. She just liked flirting. And she certainly liked the idea that people thought she slept with women. It was part of her carefully cultivated outrageous reputation.

The Cheat offered her one of her better film rôles. She’s good, but somehow her performance doesn’t quite catch fire the way it should. Despite her own reputation she just doesn’t come across as sexually alluring. She’s a bit distant. 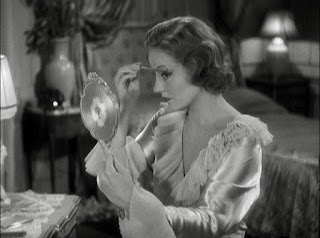 In DeMille’s version the Livingstone character was Japanese. This pre-code version is actually less daring and less outrageous in some ways than DeMille’s version. The DeMille version has more sexual tension and a greater sense of sexual depravity.

The ’31 version still manages to be pretty pre-code. The dolls in the trophy cabinet and the branding scene are definitely sleazy touches.

The Cheat is one of the six movies included in the Universal Backlot Pre-Code Collection DVD boxed set, a set that all fans of pre-code movies should own. The Cheat gets a decent transfer.

This movie is definitely worth seeking out if you’re a pre-code fan and watching it back-to-back with the 1915 film is an interesting experience. DeMille really was the master when it came to this sort of thing. The 1931 The Cheat is recommended.
Posted by dfordoom at 12:10 AM