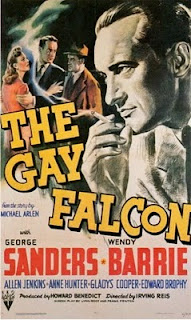 RKO had enjoyed a run of successes with their B-movies based on the Saint novels of Leslie Charteris, but then disaster struck. Charteris regained control of the film rights and pulled the plug on the movie series. The movies had been nice little earners so RKO were rather miffed, but they soon came up with a solution. They bought the rights to Michael Arlen’s story The Gay Falcon, and the rights to use the character, and simply went on to make a dozen Falcon movies that were almost indistinguishable from the Saint movies, starting with The Gay Falcon in 1941.

They were so close to the Saint movies that Charteris sued RKO, but without success.

The first four Falcon movies starred George Sanders, who played the character with the same mix of charm, amusement, mild wickedness and oddly likeable arrogance that he’d brought to the role of Simon Templar. And the Falcon series proved to be every bit as popular, and profitable.

As the movie opens Gay Lawrence is trying to please his fiancée by earning a resectable living as a stockbroker (oddly enough this was apparently considered an honest living in 1941). He has promised to give up his amateur detective activities, and to give up chasing women. His resolve lasts about half an hour, until a beautiful woman arrives seeking his services as a detective. Stockbroking is quickly forgotten.

ost all her parties have with one of her guests finding that some very expensive jewels have been stolen.

The Falcon must not only find a way to discover the identity of the thief; he must also try to prevent his love life from collapsing into complete chaos. With his sidekick ‘Goldie’ Locke he throws himself into the case with enthusiasm.

The plot is serviceable enough, but mainly the movie succeeds because RKO was very very good at this sort of thing. Very competently made and entertaining crime B-movies were something of a studio speciality.

While the Falcon movies were not film noir, they have the characteristic gritty film noir look mixed with glamour, a combination that usually succeeded. With production teams who knew exactly what they were doing, with solid supporting players, with some good guest stars (such as Gladys Cooper in this particular film) and with the charm of George Sanders in the title role success became a guaranteed commodity.

When Sanders’ career really stated to take off in Hollywood and he decided to leave the series his place was taken by his brother Tom Conway, who played the Falcon with considerable success as well.

If you’re a fan of the classic 1940s Hollywood crime B-movie then The Gay Falcon is very unlikely to disappoint you. Thoroughly enjoyable.
Posted by dfordoom at 4:25 PM