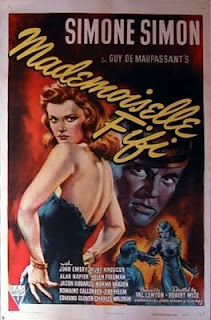 Produced by Val Lewton and directed by Robert Wise, the 1944 RKO production Mademoiselle Fifi sounds promising. Unfortunately that promise is not fulfilled.

It’s based on two short stories by Guy de Maupassant. The big problem is that with a story set during the Franco-Prussian War of 1870 but filmed in 1944 the temptation to turn it into crude wartime propaganda is just too overwhelming. Combined with changes forced by the Production Code the results are disastrous.

An assortment of miscellaneous travellers, given a permit by the occupying Prussian army, undertake a coach journey. They are all prosperous middle-class French citizens, except for one humble little laundress (played by Simone Simon). She finds herself caught up in a conflict of loyalties and patriotic duty when a brutal Prussian officer asks her to dine with him. Disliking the occupying Prussians, she refuses. The officer (who for some reason has been nicknamed Mademoiselle Fifi) th

ereupon withdraws the travel permit for everybody, stranding the passengers, until she is pressured to change her mind.

None of which makes any sense, thanks to the Production Code. In de Maupassant’s original story she is a prostitute, and the officer wants more than dinner. The sanitised version is merely silly, with people making an absurdly big deal about nothing.

The Prussians have been turned into two-dimensional jackbooted thugs, and Mademo

iselle Fifi has become a kind of proto-nazi. This robs the story of any subtlety or interest.

There’s also a revolutionary on board the coach, who thanks to the brave little laundress finds the courage to stop talking and start fighting. There’s an equally uninteresting sub-plot about a brave French priest who refuses to ring the church bells as a protest against the Prussian occupation.

What could have been an interesting story about hypocrisy, about moral coura

ge, about the true nature of patriotism is turned into clumsy and tedious propaganda.

It's also a visually rather uninteresting movie, and Robert Wise's direction is uninspired.

The only saving grace is Simone Simon’s performance. Despite the emasculated script she manages to give her character some real dignity and some genuine life, and to make us feel a real sympathy for a woman whose affections and physical favours are manipulated for political purposes. Her best efforts are sadly not enough to save this movie from terminal mediocrity and dullness.
Posted by dfordoom at 7:58 PM