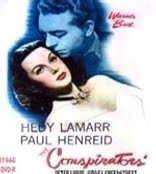 The Conspirators is another World War 2 spy thriller with the action taking place entirely in a neutral country. So it’s a bit like Casablanca except it’s set in Lisbon.

It follows a similar formula - some drama, some intrigue, some mystery and some romance. And plenty of atmosphere, with lots of shadows and fog. It works because it’s extremely well made, by people who knew exactly what they were doing.

A Dutch Resistance fighter named Vincent Van Der Lyn (Paul Henreid) is passing through Lisbon on his way to London after having escaped from occupied Europe. He intends to continu

e the fight from there. And in Lisbon he meets a woman. An exceptionally beautiful woman who is also rather mysterious (Hedy Lamarr). Her name is Irene, and Vincent quickly decides that the war can wait for a while. He’s in love. Except that the war can’t wait for a while, and Vincent finds himself a key player in a game of cat-and-mouse between German agents in neutral Portugal and a large-scale pan-European Resistance operation run by the flamboyant Ricardo Quintanilla (Sydney Greenstreet).

And the course of true love doesn’t run all that smoothly, since Vincent and Irene both suspect each other of being in league with the Gestapo. Irene also has an inconvenient husband.

The acting is uniformly good, not surprising given the very strong cast. Paul Henreid is a good low-key hero. Greenstreet’s performance is as ostentatious and entertaining as you’d expect. Peter Lorre is there as well in a fairly minor role

. But the movie really belongs to the very underrated Hedy Lamarr. She’s exceptionally glamorous and convincingly mysterious and ambiguous whilst still being sympathetic and likeable.

Jean Negulesco was a highly competent director and this was the type of film he always handled particularly well. He really doesn’t put a foot wrong with this effort.

It’s a Warner Brothers movie and it has that studio’s characteristic 1940s look to it, which of course makes it even more like Casablanca. It has the same blend of grittiness and slightly seedy glamour. But it has enough strengths to stand on its own merits as a solid and throughly enjoyable wartime thriller.
Posted by dfordoom at 7:23 PM