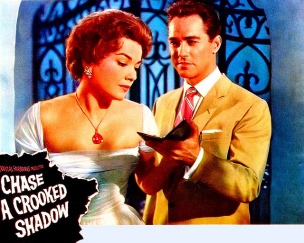 Chase a Crooked Shadow is an excellent little 1958 British mystery thriller directed by Michael Anderson. It was made by Associated British Pictures and produced by Douglas Fairbanks Jr.

Anderson had a very long and fairly interesting career as a director in a variety of genres.

Chase a Crooked Shadow is set in Spain. Wealthy young socialite Kimberley Prescott (Anne Baxter) has a villa there. She is seeking seclusion after a series of family tragedies the year before - her father committed suicide and her brother Ward was killed in a car accident. Her quest for peace and tranquility comes to an end when her dead brother (played by Richard Todd) arrives on the doorstep. 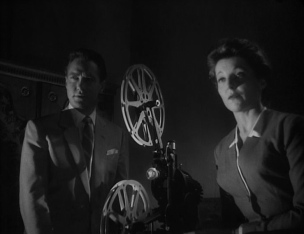 The idea of someone claiming to be a long-lost relative suddenly turning up, usually to claim a share of the family fortune, is an old one but this time there’s a major twist. In most such plots the long-lost relative has been lost for so long that no-one is really sure if the new arrival is the person he claims to be. In this one both the sister and the audience know quite well he is a fraud. In a brief prologue we see him planning the deception with his accomplice.

So given that Kimberley identified Ward’s dead body after the car accident, how does this impostor hope to get away with his plan? There are two factors in his favour. Firstly, Kimberley is in a foreign country isolated from the rest of her family so she has no-one to back her up. And secondly she had a mental breakdown after her father’s death so the fake Ward can claim that she is still unstable. He manages to convince Police Commissar Vargas (Herbert Lom) that Kimberley is slightly unbalanced mentally and is playing a joke on him by pretending not to recognise him. Since the fake Ward’s papers are all in order it proves quite easy to convince Vargas. 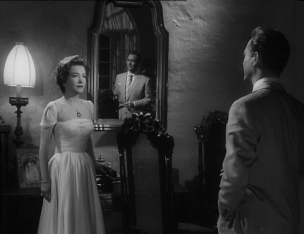 Since we know this man is not her brother the mystery in this film comes from our uncertainty as to his intentions and as to how Kimberley will extricate herself from this dangerous situation.

And the movie has some nifty plot twists still up its sleeve.

Kimberley’s father had been a wealthy diamond magnate but when the company struck difficult times it was discovered than ten million pounds’ worth of diamonds had disappeared from the company safe. The diamonds have not been seen since. 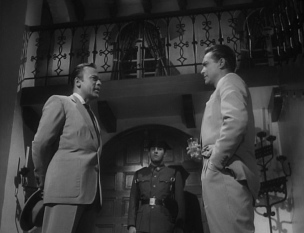 Kimberley’s discomfort is increased by the fact that her supposed brother has dismissed all her servants and installed his own in the villa so now there is nobody at all to back her up. Mostly what makes her uneasy is that she has no idea what this man wants. Does he want what’s left of the Prescott fortune? Does he have some idea of finding those missing diamonds? Is he just trying to send her mad? She appeals to Commissar Vargas again but he insists there is nothing he can do. There is no evidence of a crime. Vargas is a very easy-going fellow who dislikes trouble but he is still a cop and he’s much less of a fool than he appears to be. In fact he’s no fool at all and his policeman’s instinct tell him that there is something strange going on here, something that perhaps he should look into a little more deeply.

So far the movie has given us no indication of exactly where it’s going and the mystery will deepen as those plot twists kick in. The atmosphere of unease and mystery will deepen. Anderson’s skillful direction keeps the mystery bubbling along. It’s also quite stylish in an unobtrusive way - he uses strange camera angles at times but he uses them sparingly and he always uses them for a reason. 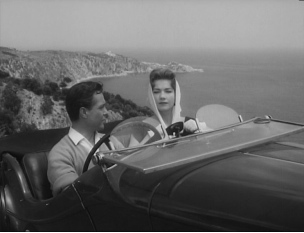 Anne Baxter is very good, never succumbing to the temptation to push her performance into the realms of hysteria but still managing to convey Kimberley’s growing fears. Richard Todd is charming but sinister. Herbert Lom, one of the great character actors, makes Vargas a frustratingly sympathetic character. He is suspicious but reluctant to act. We know he’s smart enough to figure out that something is amiss but we keep waiting for him to do something about it.

This was the golden age of the British mystery thriller and this is a very good example of the genre. It becomes more and more a psychological thriller as Kimberley’s sanity starts to teeter on the edge of giving way.

Optimum’s Region 2 DVD is a beautiful transfer. It’s in the correct 1.33:1 aspect ratio.

Highly recommended.
Posted by dfordoom at 11:20 AM