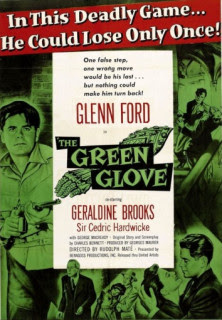 Although the IMDb lists The Green Glove as a film noir its claims to that status are more than usually dubious. This Franco-American co-production directed by Rudolph Maté is more an attempt at a Hitchcock-style thriller, and not a very successful attempt.

Lieutenant Mike Blake (Glenn Ford) is an American paratrooper who gets cut off behind enemy lines during the liberation of southern France in August 1944. He meets a Polish nobleman, Count Rona (George Macready) who is working for the Germans as a war correspondent. In fact Rona is working for nobody’s interests but his own.

In peacetime Rona was an art dealer and he has made a major find - a green jewel-encrusted gauntlet that had belonged to a warrior saint who had won a famous victory over the Moors. The gauntlet has been in the local church for centuries. Now Rona has it, but soon Mike Blake has it. Blake deposits it in his knapsack which he leaves with a French family for safe-keeping. 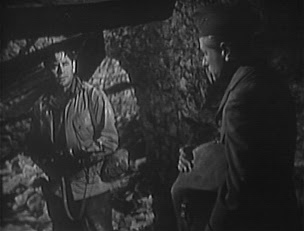 After the war Blake falls on hard times and becomes embittered. He decides to retrieve the  green gauntlet and sell it to a dealer in an attempt to restore his fortunes. He soon finds that others are on the trail of the gauntlet as well. Count Rona has not forgotten his wartime encounter with Blake.

When he realises he’s being followed he enlists the aid of an American tour guide named Chris Kenneth (Geraldine Brooks) to give his tail the slip. When Blake receives a visit from a police inspector about the small matter of a dead man who has been found in his hotel room Christine finds she is potentially an accessory to murder. She’s not really sure what Blake’s intentions are or if he’s actually a criminal but she decides (rather oddly) to tag along with him until matters resolve themselves. Now they’re both being pursued by the police and by Count Rona’s henchmen.

Blake is really a decent guy, he’s just had a few bad breaks. He’s not by nature a criminal and he finds himself having second thoughts about the gauntlet. He’s also fallen for Chris and she’s not the sort of girl who would marry a criminal. So he’s torn between his desire for the money (the gauntlet is worth a very great deal of money) and his desire to marry Chris and try to make it as a law-abiding citizen. Blake’s tangled and contradictory motivations provide the most interesting element of the film (and also its only real claim to noir status) but while Glenn Ford does his best he’s hampered by a rather lifeless screenplay by Charles Bennett that doesn’t really develop this aspect of the story to the degree it should. Glenn Ford and Geraldine Brooks are both very good and their performances are the best things in the movie. George Macready makes a good smooth villain.

Rudolph Maté’s rather pedestrian direction doesn’t help matters. The story has plenty of potential to be an exciting and interesting thriller but somehow it just falls rather flat. There are some good action sequences towards the end but the suspense isn’t built up as it should be. Considering that Maté started his career as a cinematographer it doesn’t really develop much in the way of visual interest although the locations are excellent. This one’s in the public domain but the Mill Creek DVD (from one of their 50-movie packs) is surprisingly not all that bad.

This one is perhaps worth a rental if you’re a major Glenn Ford fan but otherwise it’s difficult to recommend this movie. The plot promises to be a cross between The 39 Steps and The Maltese Falcon but it’s badly outclassed in a comparison with those classics.
Posted by dfordoom at 5:04 PM