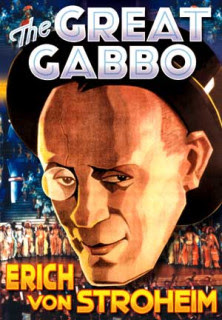 The Great Gabbo is an odd hybrid. Made in 1929 and directed by James Cruze (a prolific director during Hollywood’s silent era), it’s part drama and part musical.

Erich von Stroheim plays the title role, a ventriloquist whose dummy Otto seems more alive than he is. Gabbo’s emotional life is lived entirely through Otto.

Gabbo has a live-in girlfriend named Mary (Betty Compson) who also serves as his assistant and dresser. Gabbo treats her abominably. As she says at one point, the only sweet things he has ever said to her have been said through Otto. Gabbo is unable to admit that he loves Mary and that he needs her. She tells him that she only stays with him because he is helpless without her. Finally, after a particularly severe quarrel, she leaves him. 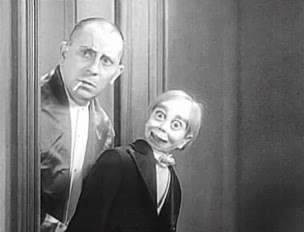 Surprisingly Gabbo now finds the success that had previously eluded him. He becomes a big star on Broadway. But he is emotionally empty. He meets Mary again and, through Otto, tells her that he needs her. Despite the way he treated her Mary is still in love with him.

Unfortunately Mary has a new boyfriend, a singer named Frank, and he’s understandably jealous over the attention that Gabbo is paying to Mary, and even more jealous of Mary’s attentions to Gabbo. The truth is that Mary likes the fact that Gabbo is dependent on her. 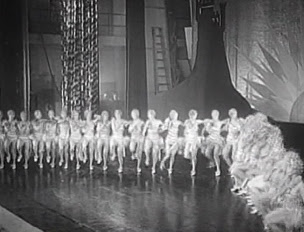 The musical numbers are quite impressive. Not in the Busby Berkeley class but still fairly lavish and with at times a touch of the bizarre. The Spider and the Fly number is a highlight. The musical numbers at first seem at odds with the main storyline but as the movie progresses we can see that they reflect the strange love story at the heart of the matter, as Gabbo and Mary really are caught in the web of love, they really are the spider and the fly, but who is the spider and who is the fly?

Early sound pictures have a reputation for being rather stilted and static and at the same time excessively talky but these faults are not particularly noticeable here. 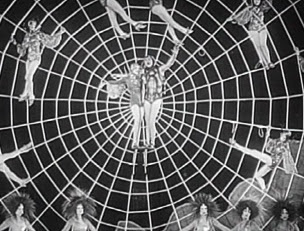 Erich von Stroheim’s performance is the key to this film success and he is able to convey very effectively the strange mixture of cruelty and vulnerability that makes up Gabbo’s character. Betty Compson is able to make Mary something more than a mere doormat although there is obviously a hint of at least emotional sado-masochism to their relationship. There is a genuine, if unhealthy, chemistry between von Stroheim and Compson.

Some sources suggest that von Stroheim may have had a hand in the directing of the movie. Certainly it has at times the feel of a von Stroheim movie.

This is certainly an unusual musical, at times romantic and at times tragic, at other times more like black comedy. It’s very ambitious for such an early musical. 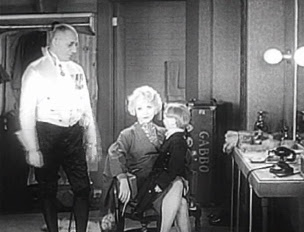 There are many public domain versions of this movie floating about, most of them terrible.

An odd movie, too odd in fact for the movie-going public in 1929, but a movie that stands up rather well today. Modern audiences are more likely to accept the jarring alternations of apparently incompatible moods to this film, and the rather perverse central relationship, as well as the psychological complexity of Gabbo’s make-up. Recommended.
Posted by dfordoom at 10:14 AM