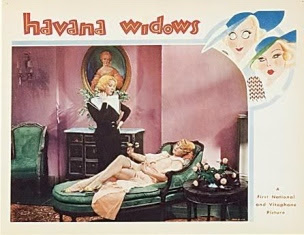 Havana Widows is a breezy 1933 pre-code comedy from first National Pictures with Joan Blondell and Glenda Farrell as a couple of gold diggers in Cuba.

Mae Knight (Blondell) and Sadie Appleby (Farrell) are chorus girls in a burlesque show. Things are pretty tough, and then a former chorus girl of their acquaintance shows up rolling in money. She’d been to Havana and she tells them it’s knee-deep in millionaires. All you need is a shady lawyer and the suckers are ripe for the plucking. And she just happens to know of a shady lawyer, a man named Duffy. Mae and Sadie can’t wait to get their bags packed to set off for Havana. 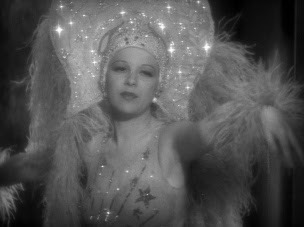 Raising the money to get to Cuba is their problem. Finally they borrow the money from Mae’s boyfriend Herman. He borrows it from his boss, but promptly loses it at the gambling tables. A shonky insurance salesman offers to help him out and Herman finds himself involved in a crooked scheme, but his big problem is that if he doesn’t pay back the money  his boss will have him rubbed out.

Meanwhile the girls are finding that separating a millionaire from his money is not as easy as they thought. When they find a rich middle-aged horse breeder named Deacon Jones (Guy Kibbee) in their bedroom they think they’ve struck it lucky. Unfortunately Mae then falls in love with Deacon’s son Bob (Lyle Talbot) who is young and handsome but penniless. And their money is soon gone, and then Herman shows up. It all gets predictably complicated. 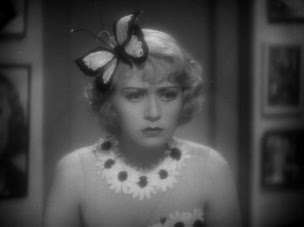 Blondell and Farrell are in top form. Lyle Talbot was a perfect actor for the pre-code era while Guy Kibbee must have made more movies in the pre-code era than anyone else. Allen Jenkins as Herman and Frank McHugh as the perpetually inebriated lawyer Duffy round out the cast.

Director Ray Enright was prolific if not terribly distinguished but he does a workmanlike job here. Pre-code comedies such as this were cranked out fairly quickly and cheaply and there’s nothing to excited about as far as the style of this movie is concerned. It really makes no more than a token effort to look like it was actually filmed in Cuba. 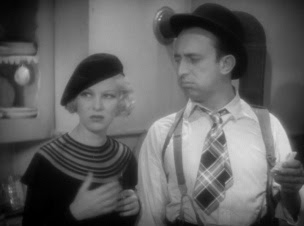 Everyone in this movie is involved in something shady or at least slightly disreputable but they’re all pleasant and likeable. The dialogue is bright and breezy and liberally peppered with wise-cracks. It has its share of risque pre-code moments and of course there’s the obligatory shot of Joan Blondell in her underwear.

At 62 minutes this is a very short movie so it’s in no danger of wearing out its welcome. It doesn’t try to be anything but light entertainment and it succeeds rather well on its own terms. You might not be rolling on the floor with laughter but it is consistently amusing. 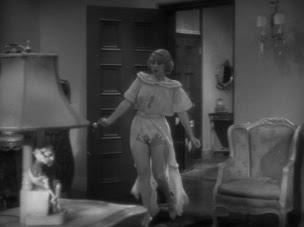 Havana Widows is available in the made-on-demand Warner Archive DVD series, paired in a double feature with I’ve Got Your Number. The transfer is very good, but there are of course no extras.

Havana Widows is good-natured slightly naughty fun and it can certainly be recommended to pre-code fans.
Posted by dfordoom at 4:48 PM