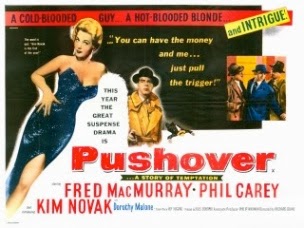 Pushover is a rather unfairly neglected 1954 Columbia film noir. Perhaps the poster art and the casting of Fred MacMurray has led some to assume this is going to be merely a Double Indemnity imitation but in fact it’s quite capable of standing on its own merits.

MacMurray is Paul Sheridan, a cop who has to make up to glamorous blonde Lona McLane (Kim Novak). It’s all in the line of duty. Lona’s boyfriend Wheeler has just pulled a big bank job and netted himself $210,000. The only lead the police have is that Wheeler has been keeping Lona in high style, paying for her fancy apartment and for all sorts of expensive items like a sporty little coupé and a mink coat. The police figure that if Wheeler is that far gone on her he’s bound to make contact with her. Sheridan’s job is to romance her to try to find out whatever he can, especially if she knows anything about Wheeler’s partner or about where the money is likely to be. 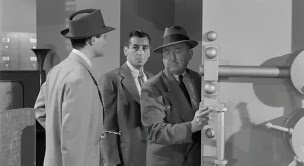 This is pretty routine stuff for a detective, except that Paul and Lona hit it off pretty well. A bit too well in fact. When Lona starts talking about what she and Paul could do with $210,000 he starts to listen. Lona doesn’t care about Wheeler. She never did. All she ever wanted was his money. It’s not that Lona is particularly evil. She’s just terribly afraid of poverty. She wants security. Wheeler had money but he was a crook an how much security does a girl really have with a crook? Paul Sheridan on the other hand is a decent stable sort of guy. With him and the $210,000 she’d have real security. And she’d have a guy she actually likes.

That’s the twist with this movie. Paul is the noir hero tempted by the chance of easy money and a glamorous blonde. Lona is the femme fatale who puts that temptation is his way. But  Paul is not Walter Neff and Lona is not Phyllis Dietrichsen. Paul and Lona are reasonably sympathetic characters. They’re not corrupt to the core right from the start the way Walter Neff and Phyllis Dietrichsen were. They really are in love. They just can’t see that easy money usually turns out not to be easy money after all. 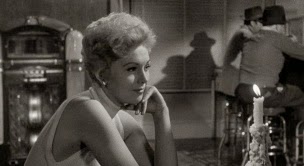 Their plan to get the money seems very simple. Almost fool-proof. Paul is the detective in charge of the stake-out on Lona’s apartment. As long as they time things right nothing can go wrong. But Paul and Lona have fallen into the noir world, and in that world something always goes wrong.

Roy Huggins’ screenplay is beautifully constructed and full of nasty little surprises for Paul and Lona. It also has plenty of classic noir hardboiled dialogue. Director Richard Quine only made a couple of noir movies but he handles this movie very adroitly. He doesn’t try to be too clever but he always keeps things visually interesting. Cinematographer Lester White provides an abundance of classic noir visual iconography. In this movie it always seems to be night and it always seems to be raining. 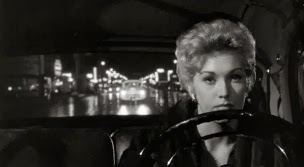 MacMurray was extremely good at playing morally corrupt characters but his performance in this one is quite different from his Walter Neff in Double Indemnity. Paul Sheridan is corrupted but he’s a decent straightforward guy and being corrupt doesn’t come naturally to him. He just loses control of his life and once he’s taken the first step there’s no going back. It’s another illustration of MacMurray’s extreme versatility as an actor and his ability to play complex and subtle bad guys.

This was Kim Novak’s first major role and she’s terrific. Lona is certainly a femme fatale but she’s motivated by a desperate need for security rather than being a conventional noir spider woman. She’s glamorous and sensual and she’s most certainly a very convincing temptress but she’s a character who would really rather be a good girl than a bad girl. Novak’s performance is thoroughly assured and totally believable. 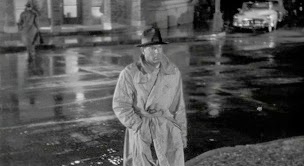 Being a major studio film Pushover has A-picture production values and a strong supporting cast.

Pushover is included in the Columbia Film Noir Classics II DVD boxed set. Sadly there are no extras but the transfer is excellent. There’s just a little grain but it actually adds to the atmosphere. On the whole picture quality is more than acceptable.

Pushover ticks all the film noir boxes without being merely a formulaic rehash of standard noir tropes. The standard noir tropes are there but they’re handled so well that they seem fresh. An extremely well-crafted film noir with great performances by the two leads - it all adds up to a movie than can be very highly recommended.
Posted by dfordoom at 8:28 PM