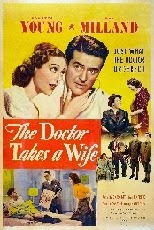 The Doctor Takes a Wife is a 1940 Columbia screwball comedy included in the Icons of Screwball Comedy, Volume 2 boxed set. It pairs Ray Milland and Loretta Young, and rather successfully too.

The first thing you need for a successful screwball comedy is a plot that will set up the necessary misunderstandings and confusions. This one does that quite successfully. June Cameron (Loretta Young) has just written a best-selling book on the joys of spinsterhood. At a hotel she runs into Dr Timothy Sterling (Ray Milland) and persuades him to give her a lift to New York. They don’t exactly hit it off at all but she needs the lift. When they stop briefly for her to send a telegraph they encounter a wedding party. By mistake the Just Married sign gets attached to the back of Dr Sterling’s car. This is spotted by an eagle-eyed reporter who is delighted to have stumbled upon such a scoop - here is the woman who has just written a book telling women they don’t need men or marriage and apparently she has just gone and got married!

This misunderstanding might have been cleared up quickly except for the unfortunate fact that Dr Sterling, after dropping June off at her apartment, gets drunk and passes out in her bed. And this is spotted by another eagle-eyed reporter who has turned up to interview her about her marriage. Now if she explains that she isn’t really married she has to explain the presence of a half-dressed man in her bedroom.

Her publisher is initially aghast. If the public learns that June is married her book isn’t going to sell any further copies and he will be ruined, and June’s career will be ruined. If she denies it there’s the problem of the aforementioned half-dressed man in her bedroom. Then he gets a brainwave. There are more married women than unmarried women in America, so if the author of the book that extolled the joys of spinsterhood now writes a book extolling the joys of marriage it will be an even bigger bestseller. 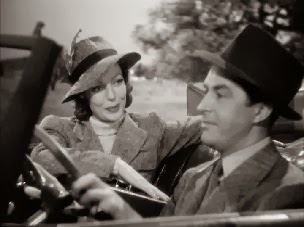 All they have to do is to persuade Dr Sterling to go along with their newly-hatched plan to pretend that he and June really are married. Once the book has made a mint they can get a quickie divorce in Reno. Persuading Dr Sterling to co-operate will be the awkward part. But not as awkward as they expected. The good doctor, currently a poorly paid lecturer in neuro-psychiatry, is desperate for a professorship. And when the dean, who believes all professors of psychiatry should be married, hears of the marriage Timothy Sterling gets his professorship. So now he has a motive to go along with the pretend marriage as well.

Of course in a screwball comedy you just know that such an intricate plan will go spectacularly wrong. The problem is that Timothy wanted the professorship so he would have enough money to marry his sweetheart Marilyn (Gail Patrick). Trying to keep Marilyn persuaded that his marriage is not a real one while trying to keep the dean and his colleagues at the university convinced that he really is living in connubial bliss is enough to set off the necessary chain of craziness on which screwball comedy depends. 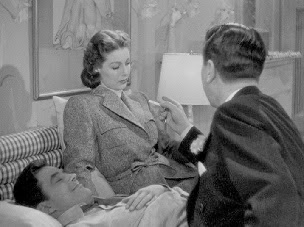 The second requirement for a successful screwball comedy is a screenplay that turns the potentially comedic situations into situations that are genuinely funny. George Seaton and Ken Englund’s screenplay fulfills that requirement very neatly. Having a director who can keep the pacing as tight as possible is obviously essential as well and Alexander Hall does that with ease.

The third necessary ingredient for screwball comedy success is two leads who can exploit all these other advantages and who have the right chemistry. Ray Milland and Loretta Young fulfill both these requirements with considerable aplomb. A screwball comedy needs two leads who start off hating and infuriating each other and they manage that extremely well. 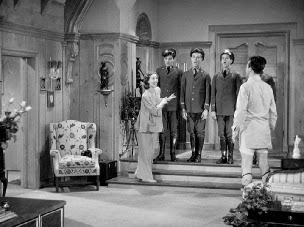 With all these ingredients perfectly combined the result is a delightful example of the genre. To add some further spice there’s a definite Battle of the Sexes angle as well, and there’s the further complication that June’s publisher Johnny (Reginald Gardner) wants to marry her. This creates more opportunities for confusion, and more fun.

Ray Milland and Loretta Young are both in fine form and the supporting players are more than competent. A romantic comedy needs to convince us that even though the two leads are both convinced that they want to marry other people they really belong together. This means that the characters they think they want to marry can’t be too sympathetic - the audience has to want the leads to end up together. Reginald Gardner and Gail Patrick do their bit in that respect - we can’t possibly imagine June will really marry the selfish and self-centred Johnny or that Timothy could seriously want to go ahead with marriage to the rather appalling Marilyn. Gardner and Patrick make sure we won’t be on the side of their characters will still making them delightfully funny. 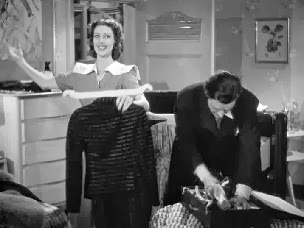 The Doctor Takes a Wife breezes along to its entirely satisfying conclusion and a great deal of fun is had along the way. It’s a thoroughly enjoyable example of a well-made and well-acted screwball comedy and it all works to perfection.

The DVD transfer is exceptionally good.

The Doctor Takes a Wife is highly recommended.
Posted by dfordoom at 12:55 AM